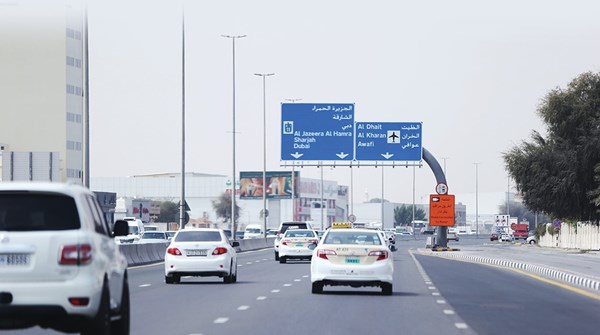 The Traffic and Patrols Department of the Ras Al Khaimah Police General Headquarters warned vehicle drivers of the danger of driving at high speeds, minutes before breakfast, to protect their safety and other road users.
This came after traffic teams monitored during the past two days of the beginning of the blessed month of Ramadan, vehicles jostling in front of various facilities, before the sunset call to prayer, which pushes some people to drive at high speeds in order to reach their homes and realize the time for breakfast.

Lieutenant Colonel Dr. Muhammad Al-Bahar, Acting Director of Traffic and Patrols Department at Ras Al Khaimah Police, told “Ittihad”: One of the phenomena that has been observed during the past two days from the start of the blessed month of Ramadan is the rush of vehicles and people to establishments providing Ramadan goods and others prepared for various foods and foods before the Maghrib prayer in particular. Which contributes to the large number of vehicles aggregated using the road.
He added: After completing the end, some headed towards driving at high speeds on the roads and lanes, in order to catch up with the breakfast time, which may pose a risk to the life of the vehicle driver and other road users during this holy month as a result of committing serious traffic violations, pointing out that it is a traffic violation. The danger that can be committed by drivers wishing to catch up with the Iftar time in homes and other locations, driving too fast or bypassing the red light signal, which is one of the most dangerous types of violations that may cause serious traffic accidents resulting in injuries. He mentioned that people can go and provide their various needs for the holy month during the different times of the day, not necessarily before the time of the sunset call to prayer, in order to preserve the safety of everyone, stressing that traffic and patrols are working hard to intensify their traffic patrols on these sites to organize and invite everyone to avoid driving at high speeds. He emphasized that the administration recently launched a traffic campaign under the slogan “Preventive driving is a requirement and a goal,” which aims to raise awareness of traffic culture among all vehicle drivers, explain the damages resulting from traffic accidents, and call for following traffic and traffic regulations to make roads safer.

The "green economy" ... the UAE's weapon in the face of climate change