Queues to get a meat bone: hunger soars in Brazil 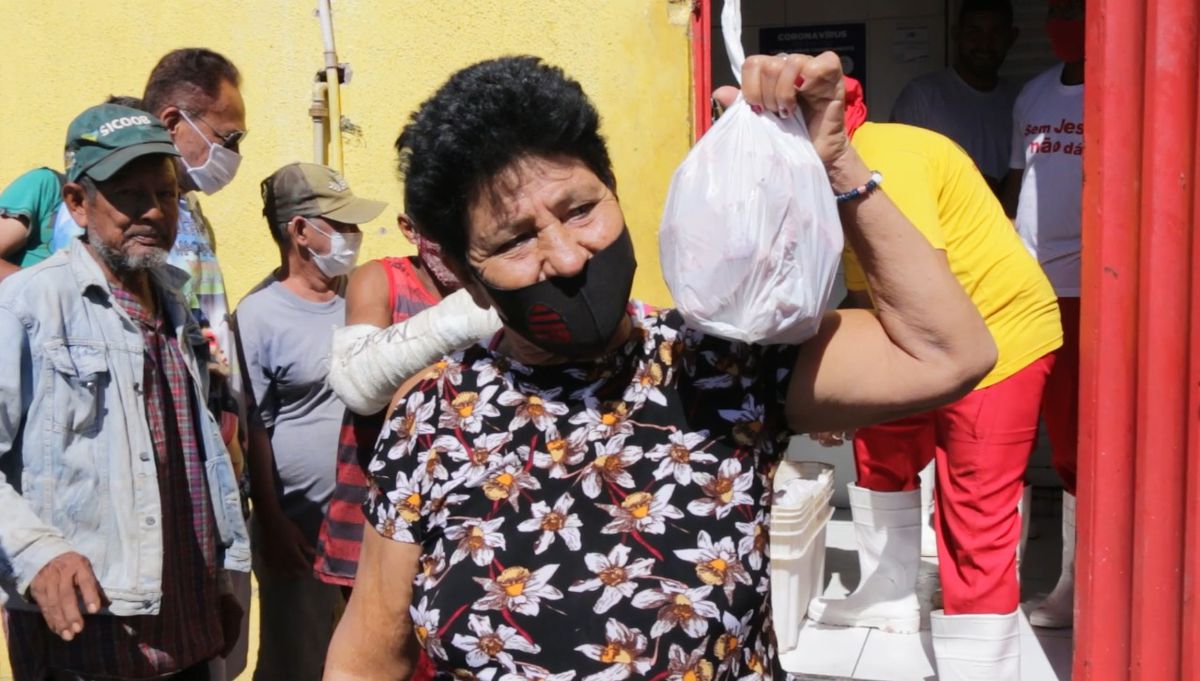 It is 9 am on a Wednesday in July in the city of Cuiabá, the capital of the State of Mato Grosso and of the millionaire Brazilian agro-industrial sector. A huge queue has formed in the side street of a butcher’s shop. The place is known for its low prices, which attract customers from different neighborhoods in the region. But now, the Atacadão da Carne, as the business is called, has become famous in the country for that row. Hundreds of people wait hours under the intense sun, sitting on the sidewalk, until a door opens and an employee begins to distribute what is left over from the boning of the cattle. They are only bones with remains of the meat sold, but for the population with fewer resources they serve as an improvised source of protein. “With this crisis, being touched by a bone is a joy! I am unemployed and there is nowhere to turn. The only meat I’ve been putting in my mouth for a long time is those bones. Everything is expensive! ”, Explains Joacil Romão da Silva, 57.

The coronavirus crisis in Brazil

The coronavirus pandemic has further aggravated the precarious situation experienced by millions of Brazilians. Unemployment is on the rise, prices have risen and hunger has skyrocketed. There are more than 19 million hungry people in Brazil, according to the latest study by the Brazilian Research Network on Food and Nutrition Sovereignty and Security (Red Penssan). In 2018, they were 10.3 million. Furthermore, the loss of purchasing power has meant that more than half of Brazil does not have stable access to food. There are 116.8 million Brazilians (55.2% of the population) who do not always eat three meals a day. Three years ago, the IBGE (Brazilian Institute of Geography and Statistics) recorded that 36.7% of the population was in this situation, which was already a high percentage compared to 2013 (22.9%).

The Cuiabá butcher shop has been distributing the remains of the meats for more than ten years. But before the pandemic, there were between 20 and 30 people in the queue, according to Edivaldo Oliveira, 58, owner of the establishment. “Now there are more, 200 people. It is almost not enough for everyone ”, he says.

The signs of Brazil’s economic and social disorder are clear. Food prices rose 15.3% between July 2020 and June 2021; meat, 38%. Also unemployment, which already affects about 15 million people in Brazil, not counting its 40 million underemployed, who work without a contract. On the corners of São Paulo, the richest city in the country, more families crowd every day who cannot afford to pay rent.

Supermarkets already offer cheaper options even to replace rice and beans, the two main foods in the Brazilian diet. The five-kilo package of rice has become more expensive by 48% in the last year and can reach 30 reais (just under $ 6) in some shops. This has opened a space to sell the so-called “rice fragments” in supermarkets, a cheaper option that replaces the traditional one. The same goes for broken bean packages, which are worth half a traditional bean.

Ana Paula dos Anjos, 38, is one of the women seeking help in Atacadão da Carne. He has been on sick leave for a year and two months due to an accident at work. The queue to get food has become a routine, because he does not have the support of either his old company or Social Security. “I go pulling as I can, going through necessities. I am the one who pays the bills at home and many times I stop eating so that my children can do so, ”she says. “Three times a week I come here to fight for some bones to give them something to eat,” says she, who takes care of her four children alone. “I do not know what to do. I cry, I ask for help. My children cry wanting something to eat, and the only solution is to ask for help. “

Celina Mota, 56, also goes to the queue and to a neighborhood market to get unsold fruits and vegetables that, if it weren’t for people like her, would end up in the trash. “I talked to the boy and he got me these vegetables. I cook a few each day. And the bones help. It gives to go on living, ”says the woman, also unemployed. Thanks to the help she receives, she is still able to feed her grandchildren. “I make a stew, I fry it, I cut it all and I freeze it so that we can eat during the week. And that’s how I manage ”, he adds, while showing the tomatoes and bananas that he has just received.

People from cities come to the queue for the carnage who arrive early and wait until 1 in the afternoon. Samara Oliveira, 38, the owner of the business, hopes that the impact the carnage is having will attract the attention of other entrepreneurs and inspire them to help. Gustavo da Silva Costa, 25, was one who was in solidarity. He arrived with more than 20 kilos of chicken on his motorcycle to distribute among the people in the queue. “I saw a report and decided to help. It is not enough for the amount of people that are here, but more people can be added ”, he says. The distribution of the chicken did not last a minute.