Queues, SMEs and viruses in the Cuba of the VIII Congress 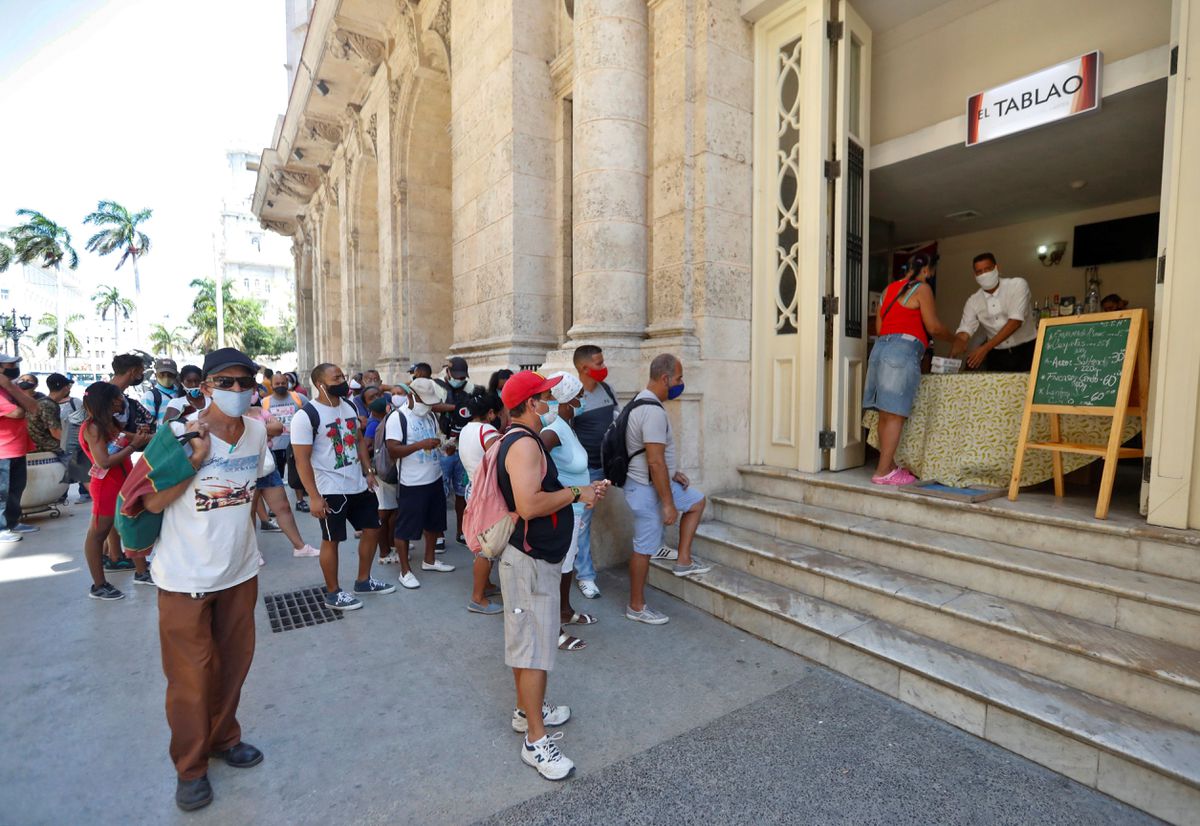 Not far from the Palace of Conventions in Havana, where the VIII Congress of the Cuban Communist Party (PCC) has been taking place since last Friday, about a hundred people with masks on are milling about in an infamous queue. Despite the fact that the coronavirus pandemic these days is at its worst, no one keeps a safe distance. It is noon, the thermometer reads 31º and there is only one tree that provides shade around a store where this Saturday they offered chicken, the main protein of the Cuban diet —when it appears—. Nobody moves from the line where some have been waiting for five hours to buy in Cuban pesos in a poorly stocked store.

A few blocks later there is another store with many more products in which you can only pay with a magnetic card associated with an account called MLC, Freely Convertible Currency, backed by dollars, euros or other foreign currencies. Raúl Castro alluded to these new stores in his report during the VIII Congress, assuring that “the extreme situation of lack of liquidity forced the reintroduction of sales in freely convertible currency”, anticipating that the measure “will last in time” until power ” recover and strengthen the economy ”.

At the magnetic card store on 70th Street, in the Miramar neighborhood, the queue is also gigantic, despite the fact that you have to pay for food and basic necessities in a currency that many Cubans cannot access. Conversations in the street while people wait are overwhelming. A housewife complains about the last electricity bill that has arrived. More than a thousand pesos, equivalent to 40 dollars at the official exchange rate, something that, he says, he barely manages to pay with his monthly income. It is five times what I paid before.

One man says that a reseller last week offered him a package of razors for 700 pesos. “I sent him to hell,” says the young man, who works in a state center. “My salary before was 900 pesos and with the monetary reform they have raised it to more than 4,000, but the price of everything has skyrocketed,” he explains. His calculation is that he and most Cubans have lost almost half of their purchasing power since the so-called Ordinance Task began in January. “A 10-pound bag of chicken costs 193 pesos in a national currency store, but those who can buy it from resellers twice or triple to avoid having to queue,” says Mayelín, who confesses that she is dedicated to the hustle to survive.

The anguish of not being able to make ends meet has settled in most Cuban homes and comes out in almost every conversation. The authorities are aware that it is a vital issue, not by chance it appeared on Saturday in the debates of the Economic and Social Commission of the VIII Congress of the PCC. Some delegates advocated the abolition of the ration book, in force for 60 years, which offers all Cubans a few foods and basic necessities at subsidized prices – prices that have risen considerably after the monetary reform, although they remain. low-. “If there were a stable level of free supply, the book would lose its meaning. But since there is no stable supply level, there is no alternative but to maintain an administrative distribution, ”said the Minister of Economy, Alejandro Gil.

In the queues near the Convention Center on Saturday there were not too many expectations that the VIII Congress will translate into improvements in the quality of life of the people. Most say they have not followed the debates. In the historic center of Old Havana, where there are numerous private businesses, restaurants and bars – now closed or selling only takeout due to the pandemic – some entrepreneurs declared that the situation is very serious. The causes are the structural crisis of the productive system, the devastating effects of the pandemic and the resurgence of the embargo by the Trump Administration. Entrepreneurs hope that after the congress “a serious opening” will begin.

“There is no choice,” says the owner of a famous palate. However, he expresses his “bewilderment” by Raúl Castro’s reference to the “limits” that the development of private initiative should have. In his report during the congress, Raúl Castro defended the restrictions for some professionals to practice on their own account and also opposed the claim for “private commercial importation” and the establishment of “a non-state trading system”. “It is these questions that cannot generate confusion. There are limits that we cannot exceed because it would lead to the destruction of socialism, because the consequences would be irreversible and would lead to strategic errors and the destruction of socialism itself, and therefore of the sovereignty of the nation ”, he assured.

There are those who see the glass half empty, and those who want to see it, with effort, half full. A self-employed person draws attention to what happened on Saturday in one of the commissions in which the congress worked, when talking about the legalization of SMEs – according to the conclave, they could have up to 100 workers. “I am optimistic because I have no choice,” concludes the entrepreneur.

RKI numbers: New infections are slightly down compared to the previous week

Canadian who beat Panarin was injured