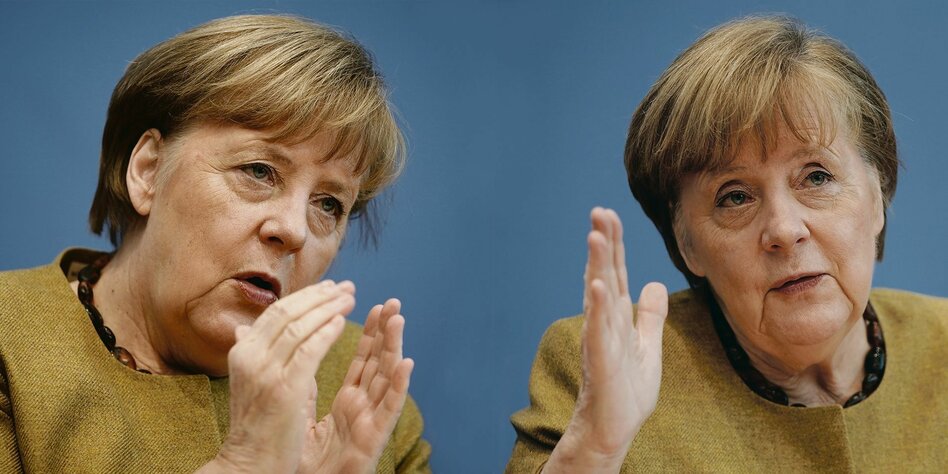 At her federal press conference, Angela Merkel would like to tell people what she is leading as Chancellor in the pandemic.

BERLIN taz | It is not often that the Chancellor comes to the federal press conference, which is led by journalists, to answer questions from the capital’s press. This was the case only three times last year. The fact that Angela Merkel appears here on Thursday morning after being invited at short notice can definitely be called a surprise. At eleven o’clock she sits in front of the striking blue wall, looks fresh and rested and explains why she came.

There is a very great need to know what she is leading as Chancellor in the pandemic, she says. And since she cannot travel as much at the moment due to the corona, it is “a coincidence that there is the federal press conference”. Here she could answer the questions that the media picked up from the population. The Chancellor wants to explain herself to the people in a situation in which the corona measures are pulling on the nerves everywhere and a new extension has to be digested.

“We are in a very difficult phase of the pandemic,” says Merkel at the beginning and refers to the divided picture that is currently emerging. The number of new infections is “finally” falling, as is the number of patients in intensive care units. That is good news: “It shows that the effort is worth it.” On the other hand, however, there are the shockingly high death rates and the new danger: the mutation of the virus, which, according to current knowledge, is significantly more contagious than the original version. “We have to take that very seriously, I would advise all of us.” Otherwise there is a risk of a third wave that could be worse than the two before.

Merkel not only makes the seriousness of the situation clear, she also takes on the displeasure in parts of the population, speaks of the pandemic being an imposition and the winter very, very difficult. But it should not be forgotten that there are already vaccines, and that is extremely fast, that can also be quickly adapted to the mutations. Merkel, the sober scientist, wants to spread hope. It is clear to her: Nothing is more important than keeping the population in line.

State commemoration of the dead of the pandemic

With remarkable detailed knowledge, she answers the many questions that pounded on her for an hour. She doesn’t even look at a cheat sheet while doing so, or if she does, you don’t notice. Merkel rattles down the current incidence figures for Bremen and Thuringia to explain the different attitudes of the prime ministers. She explains why the federal and state governments cannot immediately revoke all measures even if the corona incidence of 50 has been reached. If this value is higher, an average health department cannot track the chains of infection. However, this only works really well when the incidence value is below ten.

“For practical reasons, the hairdressers would soon have to be called in”

There was a consensus among the Prime Ministers that daycare centers and schools would be opened first. After that it will be difficult. “I would say, for practical reasons, you would soon have to call the hairdressers in”, she says and briefly lets her joke flash. To be on the safe side, she added: “But that’s more anecdotal now.”

When a journalist confronts her with the criticism that she only allows one-sided advice from experts, Merkel explains that the experts are invited to discussions depending on the question. But she also makes it clear that this is also based on a fundamental political stance. She does not believe in the strategy of herd immunity.

Merkel speaks out in favor of a state commemoration of the dead of the pandemic, as the Federal President has already suggested. Behind the “shockingly high death toll” were people and families who mourned. “My heart breaks when I see how many people have died there in solitude,” she says. “Emotionally, that is extremely difficult for me too.” One rarely hears such words from the Chancellor.

She also asserts that she does not regret having competed again in 2017 despite concerns. The decision was not an easy one for her, but she does not regret it. Politics consists in coming to the office in the morning and not knowing what the evening will look like, according to Merkel. “It’s sometimes exhausting, but that’s just what makes it so attractive.” She will rule with joy until the federal election. But then she would also be happy if the new federal government was formed as quickly as possible.

‘If my ray reached you’, a different path after two decades in music