Queiroz, from failure in the Colombian National Team to touching glory with Egypt 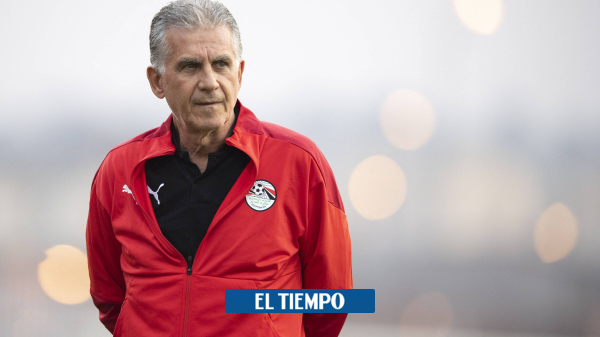 On the bench, Carlos Queiroz He has been U-20 world champion with Portugal, runner-up in an Asian club tournament with the Nagoya team, European champion with Alex Ferguson at Manchester United and twice a World Cup winner with Iran.

Although with Colombia He did not have a good stage and left the management on December 1, 2020 after two goals on dates three and four of the qualifiers for the Qatar 2022 World Cup (0-3 with Uruguay and 6-1 with Ecuador), with Egypt can now close this week as africa championthe continent in which he was born.

The ‘Pharaohs’ will not have it easy, since on Thursday they face the host country in the semifinals, Cameroonin a duel for everything high.

Born in Nampula, in Mozambique, the Portuguese Queiroz (68 years old) is a true globetrotter of football, accustomed to discovering new places and new ways of playing. With all that experience he landed a few months ago on the bench of the Mohammed Salah’s Egypt with the mission of winning the eighth African Cup of Nations (CAN) for that country and a fourth participation in the World Cup, after 1934, 1990 and 2018.

For that second objective, they will have to overcome an explosive ‘playoff’ against Senegal in March, which will be marked by the pulse between two English Liverpool attackers, Salah and Sadio Mané.

Before that big date, Queiroz can shine his record with the CAN trophy.

(Also read: Accounts of Colombia: how is the defeat against Argentina?)

Carlos Queiroz during his time with the Colombian National Team.

Queiroz’s first steps as a coach were in the youth teams of Portugal, which reached the top twice in a row with the U-20 World Cup titles in 1989 (Joao Pinto generation) and 1991 (Luis Figo/Rui Costa generation).

He then took the reins of the absolute team, but failed to lead him to the final phase of the World Cup in the United States.

After passing through Sporting Lisbon, he began his journey around the world with the New York MetroStars and then succeeded Arsène Wenger in Nagoya (Japan), where he reached the final of the Asian Cup Winners’ Cup.

(You may be interested in: Colombia: former president of Dimayor blames Ramón Jesurún for the failure)

From Colombia to Egypt

He qualified the South African team for the World Cup, but the elimination in the CAN quarterfinals against Mali (2-0) cost him his place and he did not lead the team in the World Cup in South Korea and Japan.

See also  Spinazzola, here are the plans for the return: check in February, in the field in spring

As Alex Ferguson’s deputy at Manchester United (2002-2008) he lived through some very important years for the club, between which he had a brief parenthesis to be Real Madrid’s main coach (2003-2004), without convincing.

“I was looking for an attachment. I asked Luis Figo and two other players who had worked with Carlos what they thought. They told me about a fantastic guy and I made him come to Manchester. It was one of my best decisions!Ferguson explained.

Since then his path has been marked by the national team football. First with that of her country, in which he had CR7 under his command in the 2010 World Cup, where Portugal was eliminated in the round of 16 by the future champion, Spain.

In the following two World Cups, Queiroz was in charge of Iran, where he spent eight years and managed the national team in 99 games (60 games), leaving an important mark in that country.

See also  Marcell Jacobs, from weights to the amatriciana, from Nicole to the ritual of underwear: how many curiosities!

He then began a long journey to South America to take the reins of the Colombian national team (2019-2020), with which he was in the 2019 Copa América, falling there in the quarterfinals against Chile.

His next stage is the current one, that of Egypt, where he landed in 2021.

Queiroz told the French newspaper Le Monde that he lived “the most beautiful years” of his life in his native Mozambique.

“I always consider myself a Euro-African, torn between two identities,” he explained.

Thursday’s Cameroon-Egypt match will put him up against another Portuguese coach “of the old generation” (as Queiroz put it), Toni Conceiçao, who runs the ‘Indomitable Lions’.

“He has done a brilliant job here in Cameroon. I wish him the best for all the games he has in his life… except for the next one,” he said.

‘They don’t score a goal or the rainbow’: ‘Pibe’ Valderrama on the National Team