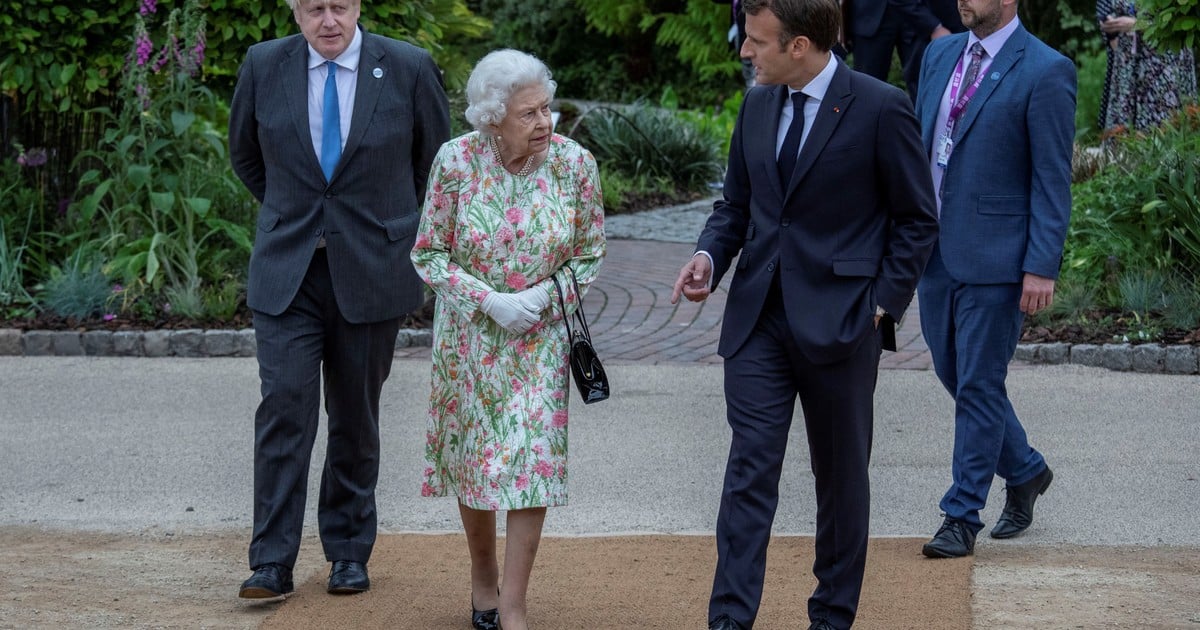 Not Joe Biden, not Boris Johnson, not any of the leaders participating in the G7. If there is a character that arouses fascination in the retinue of journalists that accompanies the president of the United States to the summit in Great Britain these days, it is Queen Elizabeth II of England.

A tense calm is imposed in the press room of the White House, installed in a hotel in the British city of Plymouth, where reporters try to move quietly so as not to disturb each other during hours of news tension.

This Friday there was even great moments of silence due to a failure in the sound of televisions placed in the living room and only the knocking of cell phone keyboards could be heard.

But late in the afternoon, the jubilation was present. What happened? Queen Elizabeth, 95, appeared alongside Biden and the rest of the G7 leaders on silent television screens.

Queen Elizabeth smiles among the State and Government leaders present at the G7 summit. Photo: AP

The monarch received political leaders for dinner in what is known as the Eden Project, an environmental space of 50 hectares with large transparent domes in which different terrestrial climates are recreated.

The BBC television networks and Sky News showed the queen for the first time with Biden since he is president.

And the American journalists, and some international ones, in the press center exploded in applause of approval, according to some of those who were there.

The smiles of satisfaction were drawn on the faces of the reporters when they saw their president in the family photo with the queen and the rest of the dignitaries.

“Finally!” Exclaimed a journalist from a prestigious American newspaper, raising her hands in the air.

Minutes before, the same reporter desperately asked how the queen could be seen online, given the failure of the televisions.

Elizabeth II, on her first departure from London or from Windsor Castle after the death of her beloved Prince Consort Philip, her life partner for more than 73 years, willingly and without apparent difficulty of movement lent herself to the umpteenth liturgy of the group portrait of his long reign.

It was located in the center of the lens, in a flowery dress and white gloves, and with himHeads of State and Government diligently lined up beside or behind her.

The queen exchanged a few words with Boris Johnson, seated to her left, and to her right Emmanuel Macron seemed almost intimidated. After the photo was taken, he got up without help to walk. Beside him Angela Merkel and Ursula von der Leyen, the head of the European Commission, smiled at him.

Joe Biden, suddenly, was like vanished, in a second plane.

The paradox is that on Sunday most journalists who have traveled to the UK with the White House will miss the expected reception of Biden with the monarch in Windsor Castle, because the group leaves for Brussels to cover the visit of the president to Belgium.

The first lady and the princesses

Precisely this Friday, an American journalist was the one who asked the question to the Duchess of Cambridge, Kate, which triggered one of the news of the day in Cornwall, where the G7 is being held,

The reporter, who was part of the “pool” of the first lady of the United States Jill biden, I wanted to know if Prince William’s wife sent any messages about the birth of Lilibeth Diana, the newborn daughter of Harry of England and Meghan Markle.

“I wish her all the best. I am looking forward to meeting her,” replied Kate, who acknowledged at the same time that I still hadn’t been able to see the baby. “I hope it is soon,” said the Duchess.

Then the journalist insisted that if she had not even seen her through video call, and Kate answered “no”.

It seems that the question did not sit well with some, or at least with the correspondent in the Royal House of the British channel Sky News, who later pointed out on the air that an American reporter “cheeky” He had asked the duchess those questions.

Despite the fact that the United States is a republic, the American media tend to cover everything related to the British monarchy with profusion.

And even more so since Harry and Meghan moved to California, in the United States, last year after resigning their roles as high-ranking members of the royal family.