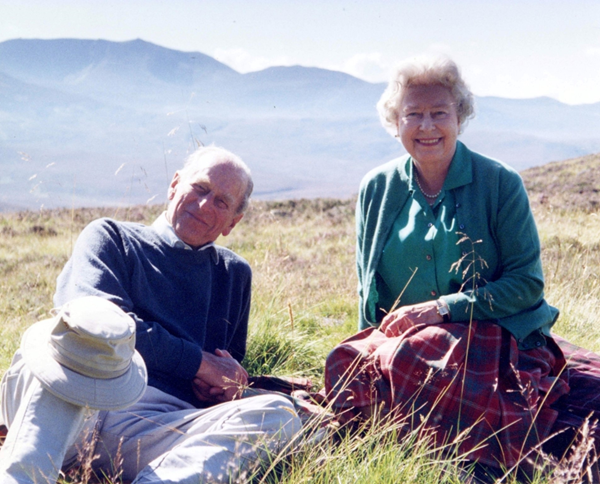 Elizabeth II and the United Kingdom, today, Saturday, bid farewell to Prince Philip, who served for seven decades as the British Crown and supported the Queen, in a brief ceremony due to the Corona epidemic and is dominated by the military character.
The Queen’s husband, who died “quietly” eight days ago, and was known for his frankness and sense of humor, would be 100 years old on the tenth of next June.
The Duke of Edinburgh will be buried in the grounds of Windsor Castle, where the man born in Corfu, prince of Greece and Denmark, died after a life of faithful service to the property since his marriage 73 years ago.
By this, the Queen lost, as she put it, “her power” and “her support”, which since the coronation of Elizabeth II in 1952 has been in the background to steadily support his wife and become a pillar of the monarchy.
His funeral will be smaller than he initially imagined. Due to the outbreak of the Coronavirus, the public was asked to refrain from gathering in front of the royal headquarters. Britain, which has been living in national mourning since the death of the Duke of Edinburgh on April 9, was invited to observe a minute of silence at 3:00 pm (1400 GMT) at the beginning of the ceremony.
Only thirty people will attend this ceremony, according to the health rules imposed in Britain.
The funeral, broadcast on television and organized in some simplicity, will reflect the military past that was a source of pride for the prince who fought in the British Navy during World War II.
The ceremony will take place in the presence of the Royal Navy, Royal Air Force and Army in Windsor to receive his coffin covered with his personal emblem and sword, to be transported aboard a simple green Land Rover pickup that the Duke of Edinburgh himself helped design.
The Grenadier Guards, one of the five infantry regiments of the Royal House Guard in which Philip served as colonel for 42 years, will advance the procession to the Church of Saint George, where the religious ceremonies will be held.

The Dean of Windsor, the spiritual leader of this church’s canons, will pay tribute to his “unwavering loyalty” to the Queen, his “courage”, “fortitude” and “faith,” according to previously published passages from his speech.
For the Windsor family, this funeral is an opportunity for their members to come together after a series of recent crises. Prince Harry will meet publicly with members of the royal family. He will attend alongside his older brother William and father, Prince Charles.
As for his wife, Megan Markle, who is pregnant with their second child, she stayed in the United States on the advice of her doctor.
In 1997 the two brothers walked after their mother’s coffin, Diana, and will repeat the same thing behind their grandfather’s coffin. But their cousin, Peter Phillips, will mediate a choice that has garnered a lot of comment in the media.
As for clothing, the British royal family made sure to appear on one front. Everyone will wear civilian clothes.