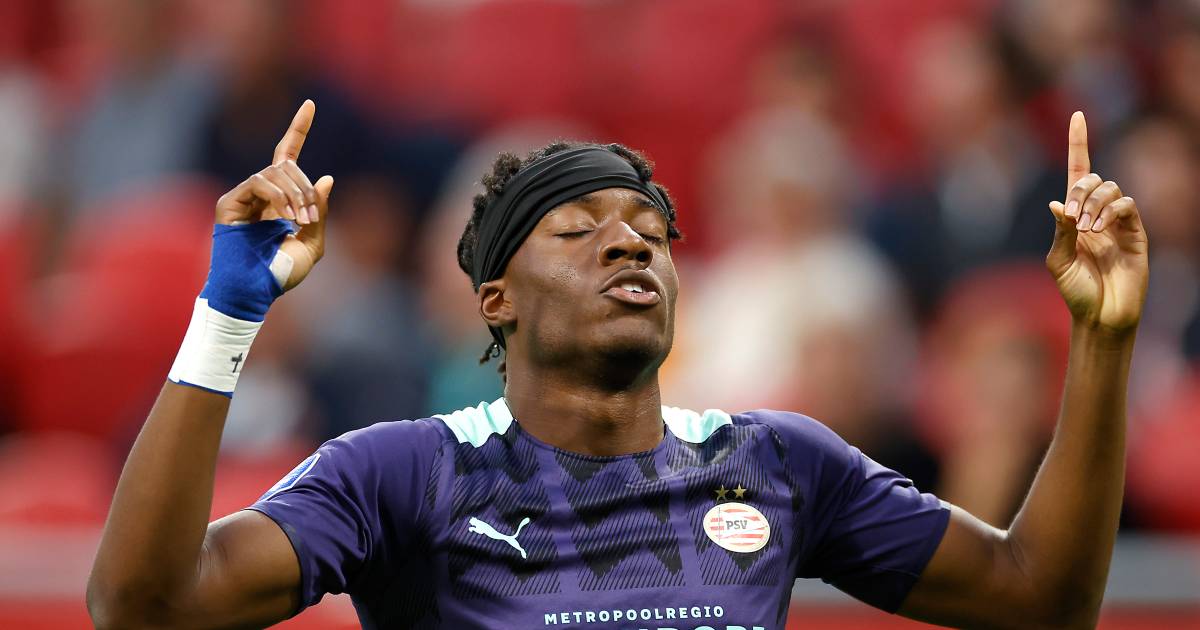 Johan Cruijff ScalePSV gave Ajax a hard blow at the start of the football season. About 25,000 spectators saw how the visitors, after Noni Madueke again got on the hips and referee Björn Kuipers gave Nicolás Tagliafico red on his farewell, floored the title holder and surprisingly ran away with the Johan Cruijff scale: 0-4 .

Was it a warm-up with the handbrake on or a serious indicator for the upcoming title fight? None of the first, unless it had to be that Ajax, as coach Erik ten Hag already predicted, was unable to rage for ninety minutes because a handful of internationals still lack top condition. Nevertheless, he drafted his strongest formation.

That Roger Schmidt also did that on the threshold of CL football, where there is also a bag with dozens ready, was more surprising. But the stadium, which was half filled, immediately got to see an intense top duel with the biggest attractions of the coming Eredivisie season. So with Steven Berghuis in the shirt of Ajax, and at PSV Mario Götze and Madueke were ‘just’ present.

The fact that the latter turned out to be the man in great shape in the preliminary round matches with Galatasaray and FC Midtjylland had apparently not yet dawned on Ajax when Madueke started his first dribble with only a hundred seconds on the clock. That was especially Lisandro Martínez and Nicolás Tagliafico, who had been put in the spotlight a little earlier for conquering the Copa Ámerica, too powerful. Madueke slipped between the two Argentinians with a powerful acceleration and pushed the opening goal in the short corner: 0-1.

Ajax then unleashed a storm. One in which PSV managed to stay upright with all sorts of tricks. After a nice pass from Dusan Tadic, Berghuis’s first goal for Ajax seemed in the making, were it not for Joël Drommel’s header from the crossbar. Not much later, the stadium exploded after Ajax with an unparalleled attack, in which Ryan Gravenberch, Berghuis (twice), Tadic and Haller forced the equalizer once hitting the ball. At least that’s what they thought, but it soon turned out to be a theme for VAR. After minutes of drawing lines, there was still a line through the beautiful goal.

The damage turned out to be even greater for Ajax, which lost its momentum after the delay. PSV stayed on the ball more easily and could counter more easily. For example, when Götze initiated a counter-attack with a beautiful tour de force in midfield, which was again promoted to goal by the quick Madueke. A doubling of the margin for the unleashed PSV and a beautiful view of the first trophy, after Ajax won the last five national prizes. Then it had to be prevented that the cup and title holder, just like in the last two competition matches, made up for a deficit.

That worked now, with the help of Tagliafico. The left back was left with a dubious honor from the Super Cup: Tagliafico became the last player to be sent off by Kuipers five minutes before half time. Even worse for Ajax was that his rash tackle on André Ramalho on the sidelines hardly made another comeback possible. At the start of the second half, the Ten Hag team played even easier. However, the connecting goal failed to materialize, also because many attacks went wrong with dissonant Haller, who was replaced by David Neres to loud cheers.

PSV got more and more space and opportunities. Pasveer, who made his official Ajax debut because Maarten Stekelenburg was not completely armpit fresh, was able to parry the necessary shots. But in and after a phase in which both coaches made changes, PSV still managed to take a big win. Substitute Yorbe Vertessen signed for the 0-3 from close by, while star Götze provided the final chord with a nice curl.

For example, title holder and favorite Ajax ran into a hard blow from the biggest competitor at the kick-off of the football season.