Protests spread across Lebanon over the deteriorating living conditions 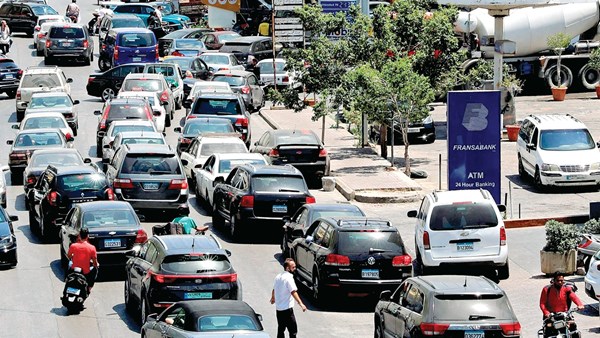 Yesterday, various Lebanese regions witnessed protests against the deteriorating living conditions, and the protesters demanded the provision of medicines and infant formula.
A number of protesters blocked the Masnaa-Rashaya road in eastern Lebanon and the Corniche al-Mazraa road in the capital, Beirut, with containers of waste and stones, and demanded the provision of infant formula and medicine.
A number of activists from the “Lebanese Depositors Association” staged a sit-in in front of the Central Bank of Lebanon on Hamra Street in Beirut and blocked the road to demand not to harm deposits in banks.
The protesters also accused the governor of the Banque du Liban, MPs, the government and the three presidents of causing the crisis and participating in the crime of impoverishing the Lebanese people, calling on the people to unite away from sectarianism and sectarianism. Most of the pharmacies also closed their doors in compliance with the decision of the pharmacy owners association to forcibly stop the drug
Work Friday and Saturday to demand solutions to the shortage of medicines and infant formula.
Most pharmacies in various regions adhered to the decision to strike in protest against the state of medicine, and to utter a cry that health security has become seriously threatened, while a small number of them violated the decision to close.
The pharmacies’ strike comes after drug importers refrained from providing pharmacies with their needs of medicines, as pharmacies became almost empty of medicines and infant formula.
In turn, the “White Shirts” organization organized a sit-in in front of the Lebanese Ministry of Health building in the Baabda district, to demand rationalization of drug support and fairness to the health sector, and made an urgent appeal to the World Health Organization to intervene directly to take over the reins. The “White Shirts” organization, which includes an alliance of doctors, pharmacists, dentists, nurses and informants, organized a sit-in in the inner courtyard of the Ministry of Health building, and the protesters carried banners that read, “From the harbor crime to the crime of cutting medicine.” The protesters called for rationalizing drug support and fairness to the health sector. They pointed out that random support does not provide medicine to the citizen, but rather secures it to smuggling mafias, and they asked about the control over smuggled medicines.
Lebanon is grappling with shortages of medical supplies and fuel, leaving motorists queuing for hours at gas stations across the country, amid a deepening economic crisis. Long queues of vehicles closed Lebanon’s streets yesterday, as drivers waited to fill up their cars, each one allowed only ten liters of petrol.
Lebanon is under heavy pressure from international financial institutions to carry out economic reforms and take action against corruption, amid a political deadlock over the formation of a new government.
In this context, Lebanese President Michel Aoun told UN Under-Secretary-General and Executive Director of the United Nations Human Settlements Program Maymouna Muhammad Sharif, his country’s aspiration to support the United Nations and brotherly and friendly countries to get out of the hardship he is experiencing.
President Aoun received yesterday, at Baabda Palace, Maimouna Mohamed Sherif, accompanied by the head of the country program for UN-Habitat, Taina Christiansen, the Director of the Executive Office, Neil Khour, and the regional representative of UN-Habitat in the Arab World, Irfan Ali, according to a statement issued by the Presidency of the Republic.
The President informed Sharif that Lebanon, which is facing difficult economic and social conditions, is looking forward to the support of the United Nations organizations and brotherly and friendly countries in order to be able to get out of the hardship it has been experiencing for months. Aoun stressed that the aid received by Lebanon is not sufficient in view of the damage it sustained, whether after the explosion in the port of Beirut, or the spread of the Corona pandemic, and the issue of Syrian displacement, which doubled during the years of the Syrian war. He pointed out that the number of Syrian refugees reached 1.8 million, and the cost incurred by Lebanon exceeded $45 billion, in addition to the negative repercussions on the Lebanese economy after the Lebanese-Syrian borders were closed and the movement of Lebanese products was not exported.
It is noteworthy that Lebanon is witnessing a severe economic crisis that led to a rise in the dollar exchange rate, as it touched the threshold of 14,800 pounds and a decline in purchasing power, in addition to a decline in the ability of the Bank of Lebanon to meet the government’s decision to support medicines and basic materials.