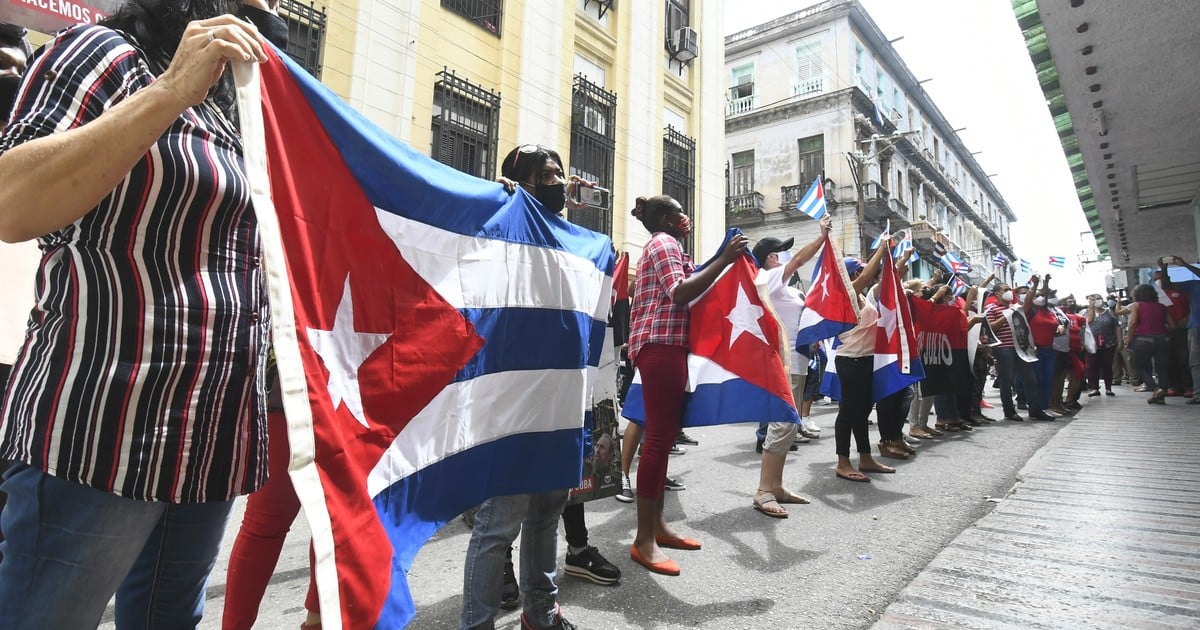 The historic protests in Cuba placed on the priority list of the president of the United States, Joe Biden, an issue he hoped to move slowly with and which, according to experts, will likely ruin the prospects for a new opening to the island in the short term.

Biden issued a statement to express his solidarity with “the Cuban people and their cry for freedom, “while the White House warned Cuban authorities not to use force after thousands of people took to the streets Sunday amid the worst economic crisis in decades.

USA he returned and hardened his policy towards Cuba with the government of Donald Trump (2017-2021) after the normalization of relations during the mandate of Barack Obama (2009-2017), who considered that more than half a century of Washington’s efforts to overthrow the regime in Havana had failed.

Policemen near the Capitol in Havana. AFP photo

Biden, who was Obama’s vice president, ordered a review of policy towards Cuba upon taking office, but the White House clearly said not to be in a hurry and that the issue “is not currently among the president’s top priorities.”

The stance towards Cuba is colored by the internal politics of the United States, with a fervently anti-communist Cuban-American community with enormous electoral weight in Florida, a key state to reach the White House.

Ryan Berg, dedicated to Latin America at the Center for Strategic and International Studies, said that the Biden government saw more urgency in addressing migration from Central America, another internal hot topic, that the situation with Cuba.

“That naturally took precedence over a country that has been frozen in time for more than 60 years. It is quite difficult to move the needle over Cuba and we’ve tried all kinds of things, “Berg said.

As a candidate, Biden had been willing to restore the advances achieved during the Obama administration by lifting restrictions on remittances and travel to Cuba, which is located just 90 miles from Florida.

But he still didn’t keep that promise and kept silence on a last-minute decision by Trump’s State Department to declare Cuba a state sponsor of terrorism, something that carries harsh sanctions.

Berg hoped that Biden would expedite the policy review toward the island, but felt that will have difficulties to renew openness if Cuba cracks down on the protests.

Desolate streets near the Capitol in Havana. AFP photo

“This could force the Biden administration to back down, though at least it forces you to pay attention“, He said.

Also, last week Biden was forced to confront another regional issue that he had in the background: the assassination of the president of Haiti Young al Moise. However, Washington did not respond favorably to a request from the troubled Caribbean nation to send troops.

Democrats control Congress only by a very narrow margin and the head of the Senate Foreign Relations Committee, Cuban-American Bob Menéndez -crucial in promoting government nominations-, breaks with a good part of the party by favoring a hard line towards the government of Havana.

Another issue Biden probably has in mind is Iran.. Obama remained cautious in his comments about a violent crackdown on protests in that Middle Eastern country, aware that the clerical regime – like Cuban President Miguel Díaz-Canel – was eager to link the protesters with the United States. .

In his post-presidential memoirs, Obama said he was deeply uncomfortable with the “passive approach” recommended by his advisers, which drew fierce condemnation from the rival Republican Party.

And the Republicans already showed their claws at the response of the Biden government to what happened in Cuba, including an initial tweet from Julia Chung, diplomat in charge of Latin America, which linked the protests on the island with the increasing cases of covid-19.

Senator Marco Rubio, a Florida Republican and an angry critic of Havana, called the comment “ridiculous” and he warned that Cuban authorities would try to “blackmail” Biden by threatening an exodus of rafters if he does not restore Obama’s policy.

John Kavulich, president of the United States-Cuba Economic and Trade Council, which advises American companies on the island, said that protests will generate pressure to complete the Cuba review, though he doubts Biden will ever reinstate Obama’s measures, such as allowing cruises.

“Every micron of US policy that affects the Republic of Cuba is seen by the Biden administration through a political microscope: pass legislation, nominations, budgets, debt ceiling and infrastructure and other measures in 2021 and then prepare for the elections of 2022 and 2024, “he said.