Protests in Cuba: why now and what are the reasons 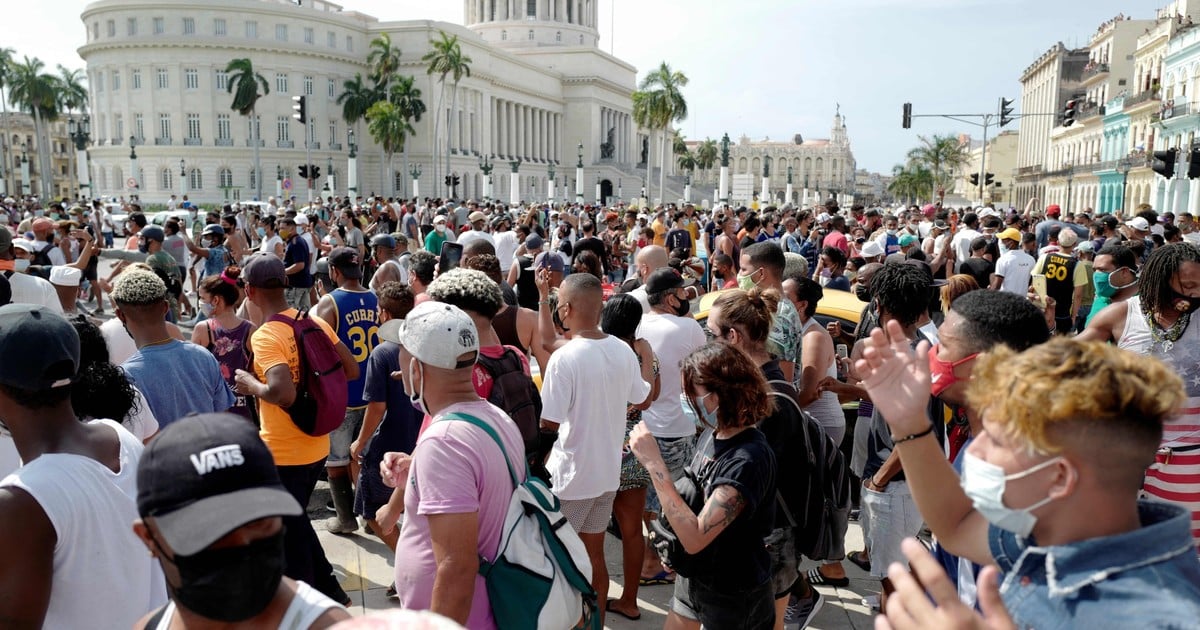 An unprecedented series of demonstrations with shouts of “freedom!” and “down with the dictatorship!” exploded on Sunday in Cuba, when the country is going through its worst economic crisis in 30 years.

The protests, widely disseminated on social networks, started spontaneously in the morning, a very rare fact in this country governed by the Communist Party (PCC-only), where the only authorized concentrations are usually those of the party.

“Down with the dictatorship”, “Let them go” or “Country and life!” – the title of a controversial song – shouted several thousand protesters in San Antonio de los Baños, a small city of 50,000 inhabitants about 30 kilometers from Havana.

“Libertad” chanted hundreds more on the Malecón, on the coast of Havana.

Members of the special brigades watch after the protest against the Government of Cuba, on a street in the town of San Antonio de los Baños (Cuba). Photo EFE

Other protests were reported and broadcast live Through Facebook or Twitter, throughout this country where the mobile internet only arrived at the end of 2018.

An imposing military and police deployment he was sent to San Antonio de los Baños during the day, AFP journalists confirmed.

The Cuban president, Miguel Díaz-Canel, also went to this town accompanied by party activists who marched shouting “Viva Cuba” and “Viva Fidel”, while along their journey the residents they kept protesting loudly against the economic crisis.

A resident, who spoke on condition of anonymity, told AFP that she had participated in the morning’s demonstration, fed up with “the situation with the current and the food.”

The coronavirus pandemic, whose first cases on the island were detected in March 2020, has engulfed Cuba in its worst economic crisis in 30 years.

Every day, Cubans have to wait long hours in queues to get food and also face a shortage of medicines, which has generated a strong malaise in society.

The arrest of a protester in Havana. Reuters photo

Economic difficulties they have also led authorities to apply power cuts lasting several hours a day in large areas of the country.

“It seems that the energy situation was the one that raised some spirits here“Diaz-Canel acknowledged in front of journalists, blaming the US sanctions imposed by Donald Trump and that Joe Biden has left unchanged so far.

“The Cuban-American mafia paying very well on social networks (…) they have taken the situation in Cuba as a pretext and have called and have called for demonstrations in all regions of the country, “he said.

The president said that “there are people who came to express dissatisfaction,” even “confused revolutionaries.”

But here we are “many, and I get like the first, that we are willing to give our lives for this revolution“he said during a live television speech.

The protests occurred on a day when Cuba registered a new daily record of infections and deaths from the coronavirus, with 6,923 cases reported for a total of 238,491 and 47 deaths in 24 hours, for a total of 1,537 deaths.

“These are alarming figures, which are increasing every day”commented on Sunday the head of epidemiology of the Ministry of Health, Francisco Durán, during his daily press conference on television.

Under the keywords #SOSCuba or #SOSMatanzas (the name of the most affected province), requests for help on social networks they multiplied, as well as calls for the government to facilitate the sending of donations from abroad.

On Saturday, a group of opponents called for the opening of a “humanitarian corridor“, an initiative that the government rejected.

“The concepts linked to humanitarian corridor and humanitarian aid are associated with areas in conflict and they do not apply to Cuba “Ernesto Soberón, the director of Consular Affairs and Attention to Cuban Residents Abroad, affirmed this Saturday at a press conference.

The authorities they denounced “a campaign” which seeks to “present an image of total chaos in the country that does not correspond to the current situation.”

However, the government plans to set up an email address on Monday to expedite donations from abroad, Soberón said.