Protests in Cuba: things by name 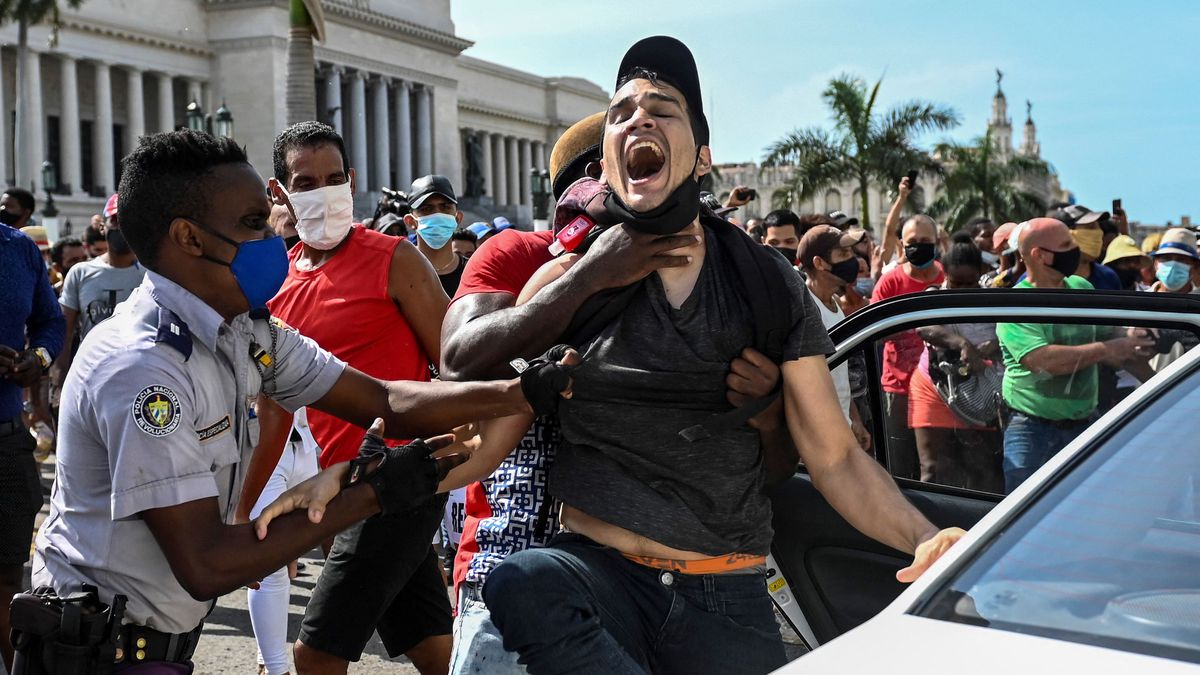 An overturned patrol in the middle of the street, two young black men on top. They seem to scream something that they have whispered all their lives. The throat turns the individual into a citizen, it is the place where the idea and the body, the sound muscle, converge. The word of protest explodes in the throat, does not reach the mouth or the tongue and makes euphony the main ideological category of civic discourse.

In the photo, the young man on the left holds out a Cuban flag, stained red in one of its white stripes. There is destruction all around, sooty facades, bricks, objects and poor people on the street. The traffic light is green, which perhaps explains why the image continues to move consciousness down, crossing the highways of astonishment and national fury, becoming the emblem of the massive demonstrations that this July 11 took place throughout Cuba, almost in every municipality and city, or at least in more municipalities and cities than anyone who has lived and died under the long shadow of Castroism can remember.

People weren’t quite sure what it required, but they didn’t need to find out either. What people verified was something simpler and more powerful, something that breaks the political capsule of authoritarianism and makes the real multiple, like a precipitate of long-contained facts: that they could do what they have always been told that cannot be done.

This intervention in the public space places language in its place. “The united people will never be defeated,” shouted many who did not have time to launch a new slogan, and who operated in this way on the past, the only territory of invention. “The street belongs to the revolutionaries,” said the officials of the ruling party, but the word in the air has no owner. It is not from who says it, but from who deserves it, and a historically exclusive idea, with fascist consequences, found for the first time that creature so many times invoked and rarely seen, the people.

President Miguel Díaz-Canel, on a national broadcast, called for civil war. “The order of combat is given. To the streets the revolutionaries ”, and gave a cowardly blow on the table, without much conviction.

What has caused all this? There are catalysts acting on a widely deformed social life management structure: the absence of political leadership, the health crisis and rising deaths from the coronavirus, rampant shortages, repression, imprisonment, and constant surveillance of dissidents and artists increasingly known outside their work or affective circles, but, above all, the presence of a State that acts as a corporation and the loss of salary value in a dollarized country, where work is paid in a currency that does not good for nothing.

On On indirect private government, the Cameroonian philosopher Achille Mbembe says: “The end of wages as the modality par excellence of the clientelization of society and its replacement by ‘occasional payments’ transforms, in effect, the bases on which rights have been converted up to now. , transfers and obligations and, therefore, the very definitions of postcolonial citizenship. Citizen is now the one who can have access to the networks of the underground economy and subsist through this economy ”.

That is the blind spot of the Cuban conflict, which allows us to subvert the media logic of government political games. State propaganda accuses the protesters of mercenaries, an elite troop equipped with stones and sticks, dressed in ragged clothes, and on their faces the dry and angry expression of hunger. Meanwhile, the mayor of Miami, Francis Suárez, stupidly calls for a military intervention in Cuba. He feigns concern for those who protest, engages in internal politics and gives the Havana regime a juicy enough argument to sustain a little more the house of cards of the Cold War. This non-existent intervention, and the trump card of the economic embargo – a strategy that we condemn not only as illegitimate, but also as inefficient – are the touchstones of the official rhetoric.

Díaz-Canel, this Monday morning, seemed at times seized by fear. He asked again for the end of the embargo, and the typical vocabulary of the bureaucratic civil service was not enough to name Mia Khalifa, the former porn star who in previous days had tweeted about the health situation on the island, without fuss or solemnity. “And you have to see here how, throughout this campaign, they went to all the youtubers and to all influencers that they could in social networks, including a certain artist with certain characteristics who began by supporting the blockade and it seems that later they pressured her, and ended up… ehhh… saying that I am a tyrant and some of those… ehhh… ehhh… some of those epithets ” said the president, staggering, his communist morale tainted.

Knowing, furthermore, that the people who took to the streets are the same people who watch television, and that they cannot continue to accuse those with empty pockets as mercenaries and financed (something that everyone in Cuba believes of the other, even who accuse you), Díaz-Canel lowered his tone: “At no time have we wanted to bother you, dear people,” he said. If so, they have covered it up quite a bit. The protests not only attacked the Castro regime’s police force and the headquarters of the Communist Party or the People’s Power, but they also looted those capitalist parishes scattered throughout each town: the currency stores that those who receive remittances from abroad can access and that they set very clearly who is who in Cuba, and to what class they belong.

The battalions of order disguised themselves as civilians and went out to beat. This strategy, a copy of the Paracos methods used in Colombia to quell or manipulate popular protests such as those that took place recently against the tax reform of the Government of Iván Duque, would be enough by itself to reveal what is the true political sign of the Cuban military caste. . In real socialism, the aristocracy is governed by ideological contracts that hide structural inequality and disguise the validity of the laws of capital under an epic-messianic cloak that many, elsewhere, are still willing to buy.

Information is now scant and confusing, full of speculation. The internet has been cut off. We certainly need Cuba to not be counted only by Cubans. That the affective experiences that foreigners have had with the island’s history be subjected to critical judgment, and that our false exceptionality also be scrutinized. However, no personal altar or intimate utopian dream is worth more than any of the bodies that at this time have disappeared, are imprisoned or even shot.

The reaction is nothing more than the insistence on an idea abandoned by the facts. Brecht used to say that politics is the art of thinking in the heads of others, but I believe that it is rather the profession of feeling in the hearts of others.