Protests in Cuba: does the ‘silent exodus’ of rafters reappear in the face of crisis and repression? 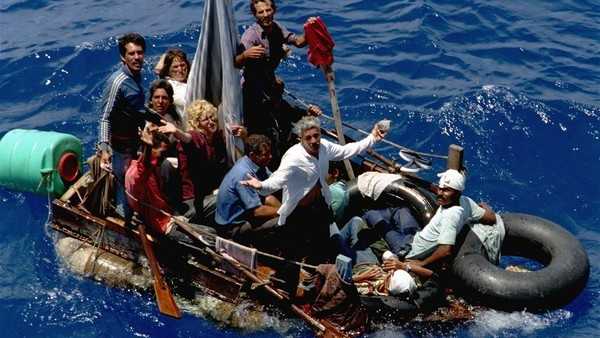 The increase so far this year in the number of rafters from Cuba who are trying at the risk of their lives to reach the coast of Florida (USA) has set off alarms for a “silent exodus”, whose tragic face was seen this week with the disappearance of 9 of the 22 occupants of a raft shipwrecked.

The number of Cubans intercepted in large groups by the US Coast Guard since the beginning of the current fiscal year (October 1, 2020) counts already at least 536, compared to 313 in 2019 and 49 last year, in many cases in tragic shipwrecks like last Monday.

The overloaded vessel that capsized 26 miles (40 km) southeast of Key West, at the southern tip of Florida, did so just on the day that Tropical Storm Elsa was crossing central Cuba, which shows the degree of despair that a good part of Cuban society feels.

Two Coast Guard cutters and helicopters searched for days for the 9 Cubans, 7 men and 2 women, lost in the turbulent Straits of Florida, where many rafters have perished trying to cross it in their flight from the island. But they already gave up.

Cuban immigrants take to the sea in 2016, one of the years with the greatest success. AFP photo

This “silent exodus” across the Straits of Florida and in precarious boats that it has been increasing during this last year “is not going to decrease, but on the contrary, it is going to grow,” Ramón Saúl Sánchez, president of the exile group Movimiento Democracia, assured Efe on Thursday.

Sánchez cited the “ineptitude of the (Cuban) dictatorship, the deterioration of the infrastructure on the island, the pandemic and the repression continued regime “as causes of this new” silent “march of Cubans trying to reach the United States by land or sea.

The activist does not rule out that a massive migration can be unleashed, although “the Cuban dictatorship is very clever,” he says, and “still uses this tool as a pressure and negotiation factor” with the United States Government, which is very concerned about the possibility of a migratory wave from the island by sea. , he opined.

In any case, and despite this growing illegal emigration by sea, there is no indication that it is possible to speak of a mass exodus.

“Although the numbers (of rafters intercepted) have increased in the last year compared to 2019 or 2020, they still stay low compared to the years in which the ‘dry feet / wet feet’ law was in force, “repealed in 2017, Hansel D. Pintos, a public affairs officer for the Seventh District of the Coast Guard, told EFE.

What does exist is a constant work of the Coast Guard to “educate immigrants on the dangers of illegal immigration by maritime routes in unsuitable vessels, “added Pintos, whose district encompasses 1.8 million square miles of maritime surveillance, including most of the Caribbean.

The Coast Guard does not hide its great concern about these maritime voyages by Cubans in “precarious vessels, built in a rustic way with recycled parts such as metals, motors or plastics and without first aid kits. “

But “people are desperate. Citizen frustration has escalated to very critical levels and they prefer to jump into the sea and try to escape the martyrdom of living on the island, “Emilio Morales, president of the consulting firm Havana Consulting Group, told Efe.

“Runaway inflation has shocked people” while the Government “has suffocated” with its measures the Cuban families and “the salary is not even enough for a week,” the Cuban economist stressed.

Regarding the possibility of a massive exodus, he said that it can only occur “if the Cuban government provokes it by opening the borders. as it did in 1994 “, when the so-called “rafter crisis” occurred, in which 50,000 Cubans jumped into the sea to reach the US coast.

However, Morales clarified, an action of this type “could be interpreted as an act of war” Cuba and, given the immigration problems that the Biden Administration is currently dealing with on the southern border, “I don’t think it allows this type of blackmail from the Cuban government.”

In Morales’s opinion, the Cuban government “no longer has popular support and right now it is stumbling on its mission to reinvent itself, penniless, losing the few lines of credit it had “and with allies like China and Russia already closed to lending to a” bad paying “country.

It is estimated that more than 2.5 million Cubans reside abroad of the largest of the Antilles, around 20% of its 11.2 million inhabitants.

Yuri Cardentey is one of the emigrants who left the island in 1991 with five friends on a precarious “raft” that they built themselves with license plates and screws to make the journey to the “American dream.”

“After the collapse of the Soviet Union we imagined that an economic crisis was coming. The country had no future. We had no future and we jumped into the sea, “Cardentey, 59, explains to Efe, who finds similarities between the situation of hopelessness in Cuban society then and now.

Cardentey, now with a thriving auto paint and repair business in Miami, says that, “apart from the political factor and repression” (on the island), it is the “crisis of the Cuban economic system, disaster and chaos “, which is generating this departure of rafters.

Like Sánchez, Cardentey believes that the “situation” that precipitated the “crisis of the rafters”: “The economic crisis (on the island) is very strong, comparable or even worse than that of 1994, without improvement, and that is sinking,” he said.