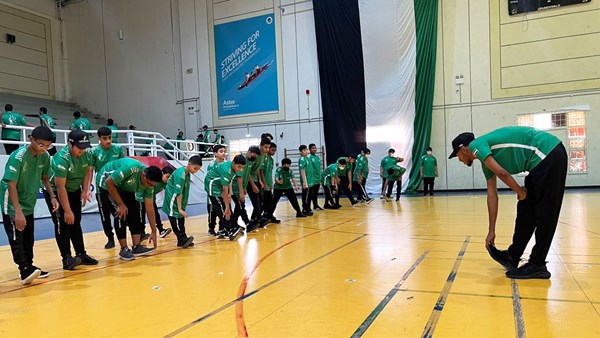 The summer vacation was a source of inconvenience and anxiety for the student, Marwan Mahdi, because of his suffering from the deadly free time, in addition to the harassment of some of his bad companions in his area of ​​residence, who repeatedly pressured him to join them in practicing some wrong behaviors, until he had the opportunity to join the student summer programs represented by the Dubai Police. He joined Hemaya International Center of the General Department of Narcotics Control in Dubai Police, in 2017, which was his gradual start to join the summer programs for 5 consecutive years, followed by his participation this year as a volunteer supervisor at Al Safa Student Center, the same school that graduated from its high school.
Lieutenant Tariq Saeed Al Mutawa, coordinator of the Bur Dubai Summer Centers, said that those in charge of the student summer programs are keen to follow up on the participants at various times of the day, and not only during the morning period designated for summer activities, in an effort to contain it and provide moral support to him and his family, explaining that the student Marwan is one of the most The students have been committed, polite and active since he joined the summer student activity in 2017, and when those in charge of the summer programs learned about his condition and the extent of his pressure, they urgently helped him, intensified communication with him and participated in various awareness programs, in addition to constantly following him outside the center.
Lieutenant Tariq added that the Dubai Police summer student programs are among the distinguished summer programs at the state level, due to the variety of activities and programs they contain that contribute greatly to refining students’ talents, help them occupy their spare time, nourish their minds and contribute greatly.
For his part, the student Marwan Mahdi thanked the organizers of the student summer centers in general, and those in charge of the Al-Safa Student Center in particular. Since 2017, they have provided him with the necessary support to fill his spare time, in addition to following up on him after the summer vacation. The supervisors contributed to opening new horizons in his life by involving him in many volunteer programs during the last period. He added, “I contributed to the campaign to feed workers during the Covid-19 period, and I am also a permanent volunteer with the positive spirit initiative, and I contributed to the “We welcome you with love” campaign by volunteering to receive guests and visitors to the recently opened Mohammed bin Rashid Library, calling on students to occupy their free time with useful programs such as those of the Dubai Police. Student seasonal.