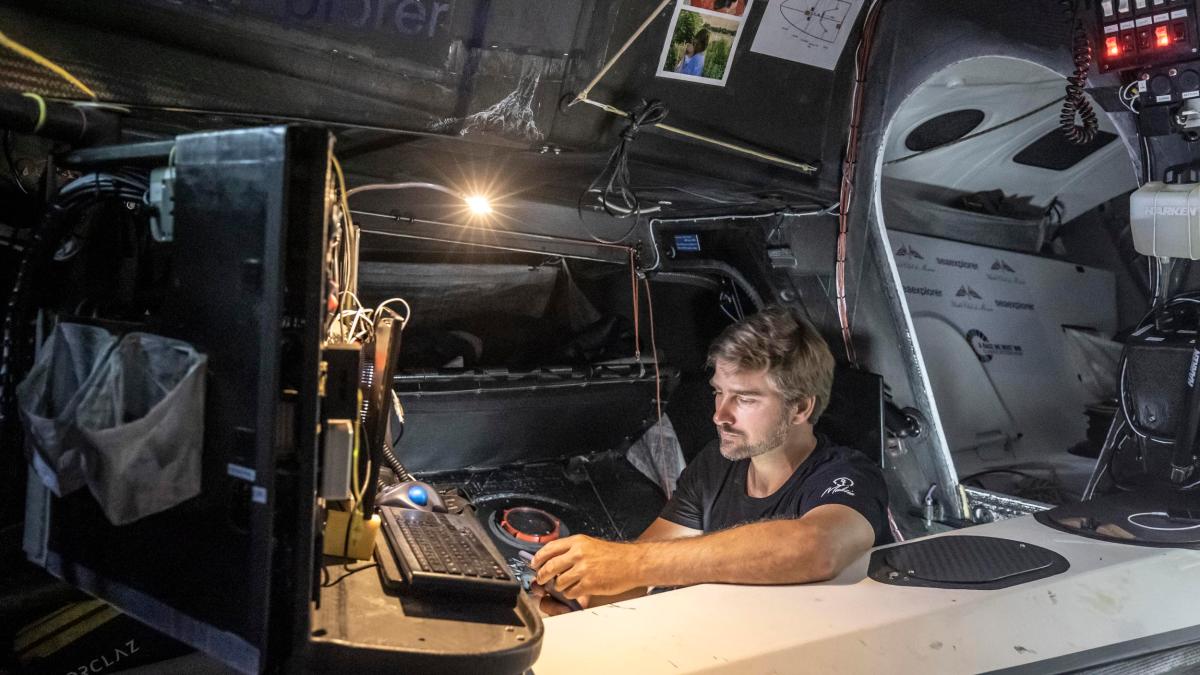 NAfter the first 4,500 of around 28,000 nautical miles, skipper Boris Herrmann slowed down his journey and reached for the diving robot “Argo”, which he had stowed in the bow of his racing yacht “Seaexplorer”. Carefully so that the sensitive sensors were not damaged, he carried the device, which weighs around 15 kilos, to the stern of the ship. He activated it and threw “Argo” overboard – southwest of Cape Verde, off the west coast of Africa.

The conditions for the mini submarine in the form of a gas cylinder were ideal, the water was warm, the trade winds were favorable. Since then, “Argo” has been drifting with the currents without remote control, repeatedly diving to a depth of 2000 meters, measuring temperature and salinity, surfacing again and sending the data to researchers in Kiel and Hamburg before the next dive. Looking back, Herrmann says: “That was a great feeling and gave me a boost that was important in a race of this length.”

For the 39-year-old, the fight against climate change was worth a small competitive disadvantage when he first participated in the Vendée Globe. With the 15 kilo diving robot “Argo”, Herrmann threw ballast off in the first third of his journey. But his ship “Seaexplorer”, trimmed to speed in every detail, transported another measuring device over the full distance, which was firmly installed in the hull and weighed 17 kilograms from SubCtech’s Oceanpack Race.

In terms of weight, the man from Hamburg had one more suitcase on board than his competitors – the fact that Herrmann ended up fifth in the world’s toughest sailing race and not further ahead was not due to the payload, but rather to a collision with a French fishing cutter before the goal.

For Herrmann, climate protection is a matter close to the heart. “The point is to understand that not always easy ways offer a solution,” says the professional sailor. In the economy, too, investments sometimes have to be made so that production can be more environmentally friendly afterwards. The same principle also applies to sailing: “You shouldn’t pay attention to the small extra weight, you have to counteract what important knowledge about the protection of the oceans can be made by using the equipment.” A second sailor, the French Fabricio Amadeo, also set up an Oceanpack Race on his yacht “Newrest”, but he had to end the race early near Cape Town. Amadeo and Herrmann hope that many sailors will follow their example.

Boris Herrmann made this crossing known

Beyond the races, Herrmann is committed to climate protection. His most spectacular action was the emission-free crossing by “Seaexplorer” with Greta Thunberg to the United Nations climate summit in New York in 2019 because the Swedish climate activist did not want to fly. But also as the patron of the “Hamburg Climate Week” and with the “Ocean Challenge” educational program, led by Boris Frau Birte, he campaigns for an energy transition and the reduction of greenhouse gases.

The Malizia team, which operates the “Seaexplorer” from the Yacht Club de Monaco, also includes two scientists: ocean researcher Toste Tanhua from Geomar in Kiel and Peter Landschützer, professor of ocean dynamics at the University of Hamburg and group leader at the local Max Planck Institute for Meteorology . Landschützer researches the influence of ocean dynamics on the function of the world’s oceans as a storage medium for carbon dioxide (CO2).

Specifically, with a view to greenhouse gases, he is currently investigating the question of how much of it goes into the polar sea and how much into the Atlantic. Due to their storage capacity, the oceans slow down climate change. “Forecasts are not my specialty – but the ocean will not function as storage forever, there are limits, a maximum storage capacity,” says Landschützer. And in order to explore these, the database must be improved.

In the atmosphere, the proportions of the gases nitrogen (78 percent), oxygen (21 percent) and carbon dioxide (0.04 percent) are relatively constant. “It’s a little different in the ocean,” explains Landschützer, “that’s the CO2-Content variable. That has to do with the dynamics of the ocean, that is, with the currents, but also with biological production. ”The sea is more receptive to CO where plankton is produced2. Where deep-sea water that is more enriched with the gas comes up, it absorbs less from the air. Does the CO2-The content of the sea above that in the air, it even releases carbon dioxide again.

When the “Seaexplorer” is on the move, seawater flows constantly through the Oceanpack Race, and in addition to temperature and salt content, the CO is measured every 20 seconds2-Salary. It is then transmitted by radio.

For Landschützer and Tanhua, the data collected by Herrmann is extremely valuable. In addition to measurements from around 40 research vessels around the world, the scientists now also use data collected from container and cargo ships. Landschützer explains, “They are mainly in the northern hemisphere between North America, Asia and Europe. That means we understand the North Atlantic and the North Pacific very well. “

In the Southern Ocean, however, between 40 and 50 degrees south latitude, there are hardly any measurements. And it is precisely in this zone, the so-called “Roaring Forties” (“Thundering Forties”), that the route of the Vendée Globe runs because of the strong westerly winds. Landschützer: “Boris sailed in a region from which there is in part no data at all. In other words, he partially collected the first data at all. “

What role does the Southern Ocean play?

The scientist was already able to derive initial findings from the data from the “Seaexplorer”: “Based on the data from November and December, we can say that the ocean is largely produced as CO2-Sinker has acted “- this would mean that this marine region would have a positive influence on the concentration of the greenhouse gas. But not to the same extent everywhere, because “in the Southern Ocean, where there are different water masses, you can also see that these change regionally by leaps and bounds.” This confirms the previous understanding of the Southern Ocean.

The flood of data will not stop for the next three years. The Oceanpack on board the “Seaexplorer” is safe in the port of Les Sables d’Olonne again, but “Argo” will be in the sea for another three years. It is part of an international fleet of now 4,000 scientific underwater drones, equipped with a swim bladder.

Boris Herrmann’s litter of “Argo” was not only a big one, but also a sustainable one. This aspect was also important from the start for the professional skipper himself. He says: “Finishing the race as well as possible with a view to the ranking and at the same time collecting this data have always been the overarching goals of our team. Whenever the going gets tough, I have focused on this thought. “