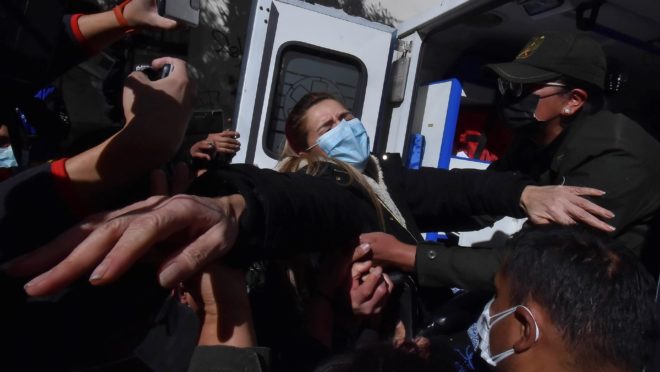 0
SHARES
0
VIEWS
Share on FacebookShare on Twitter
Jeanine Áñez, former president of Bolivia, is transported by ambulance to a hospital in La Paz, 13 August| Photo: EFE/Stringer

The women’s penitentiary in Miraflores, in La Paz, where Jeanine Áñez, former interim president of Bolivia is imprisoned, was the scene of turmoil on Wednesday after a meeting of two different groups, one in support and the other against the successor of Evo Morales .

Today, a march called by a human rights group called for respect for Áñez’s right to defend himself in freedom from charges of conspiracy, sedition and terrorism, which led to his arrest in March of this year. The children of former Bolivian interim president, Carolina and José Armando participated in the march, as well as the president of the Legislative Assembly of the Santa Cruz department, Zvonko Matkovic, and several supporters of the policy.

Upon arrival at the penitentiary, the group met with another who was demanding justice for the deaths in the “massacres of Senkata and Sacaba”, which occurred during the country’s political crisis in 2019, and demanded that Áñez remain in prison. Participants in both acts ended up exchanging curses and shoving. Several materials used to protest were destroyed during the riot.

The situation of the former interim president has been a source of controversy due to several releases from prison for medical reasons. In front of the cameras, Áñez has appeared weakened, claiming a lack of memory, while prison authorities indicate that she has been stable and has treatable chronic diseases. Over the weekend, Evo Morales’ successor caused wounds to her own arms, with the government indicating they were superficial injuries, while the family pointed out the need for stitches to close the cuts. Hamilton knocks out Verstappen and wins at Silverstone, Leclerc and Ferrari one step away from the dream