Princes William and Harry leave their fight to honor Lady Di, who would turn 60 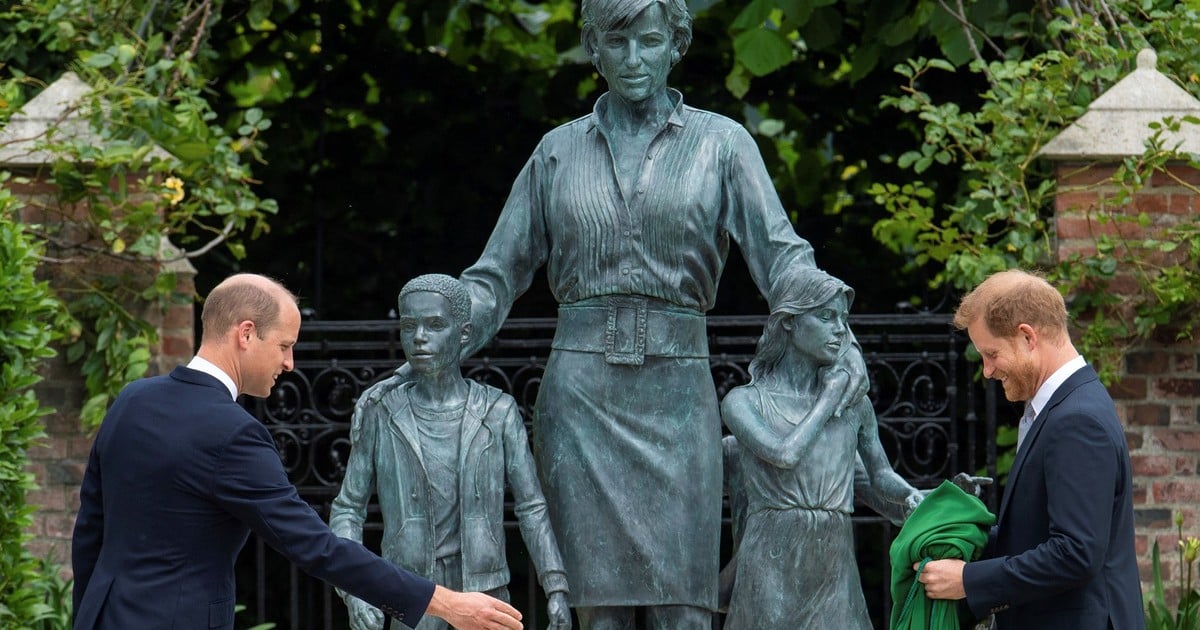 Prince William, heir to the British throne, and his brother, Prince Harry, made a truce in their fierce and public fight to commemorate this Thursday a postponed tribute to their mother, Princess Diana, in Sunken Garden, their favorite garden in the Kensignton Palace, on her 60th birthday.

An image of unity, which the House of Windsor needs when it is family fracture it damages his image and his reputation in front of his subjects and the world.

The statue of Diana, Princess of Wales, which was discovered at Kensington Palace, is surrounded by a garden planted around a water fountain, with some of her favorite flowers, including forget-me-nots and roses.

The image is from she hugging two boys, in a typical gesture of humanity and dressed as in the last days of his life.

There were no speeches but a short applause after unveiling the bronze statue. The press could not access and received the photographic material after the ceremony.

They showed the two brothers talking to each other and conversing with the Spencer family. Strangely, his Uncle Spencer greeted Harry with his hand extended.

The image of the bronze statue was revealed when William and Harry together and smiling pulled out a green English shawl. Thus an unexpected statue appeared: Diana, with a girl and a boy, surrounding them with her arms. Diana’s humanitarian legacy when your children are seriously divided.

The sculptor and the garden designer spoke with Harry and William and gave them details of the work. The British tabloid press began by saying that the brothers, smiling at the photographer and together, “put their differences aside in a moving ceremony.”

Brothers William and Harry joined for the tribute this Thursday. Photo: AP

In a joint statement, William and Harry said: “Today, on what would be our mother’s 60th birthday, we remember her love, strength and character, qualities that made her a force of goodness around the world, changing lives for the better. best”.

Tensions in the royal family

But this minimalist act reflected the dysfunctions that the House of Windsor has since the death of the princess and frustrated sovereign in a car accident in Paris 25 years ago.

It was not Queen Elizabeth, nor was her ex-husband and father of her children, Prince Charles, present.

Kate, the Duchess of Cambridge, and Diana’s three grandchildren, George, Charlotte and Louis, were not there. Neither Meghan, the Duchess of Sussex, nor her two children, Archie and Lilibeth Diana, traveled. Neither are his friends, whose presence was canceled and transferred to another ceremony in September.

Pip Morrison, the designer of the garden to honor Diana. Photo: AFP

Prince Charles did not attend to the ceremony because he said he had “painful memories.” Queen Elizabeth gave no reason not to attend. He is in Scotland on a tour to prevent him from leaving the UK, before his holiday at Balmoral Palace.

In the end, the rebel of the House of Windsor, the ignored or silenced has her monument.

She will be remembered for having modernized and humanized the British monarchy, despite their Royals.

Since his death, they could never be the same until now. Their ghost forces them to reinvent and adapt, despite themselves. It’s the new generation Windsor-Spencer that finally paid homage to her, without a single original Windsor present.

The unveiling of her statue on Diana’s 60th anniversary was organized – and many times postponed – by her two sons, whose relationship has been severed at least 18 months ago.

Prince Harry left the royal family to settle in Montecito, in the United States, along with Meghan Markle, his mixed-race wife and the reason for the dispute.

In a television interview that went around the world, they accused the royal family of racism.

Meghan targeted a member of the royal family, who was concerned about her son’s skin color.

William accused this “bloody women” of abusing his staff. The palace had to react diplomatically to the sensitive accusations of racism.

Despite the efforts no reconciliation in sight, at least between Prince William and Meghan, who is not willing to give in in this round of accusations or return to the kingdom.

Her Frogmore Cottage in Windsor is being used by Princess Eugenie and her husband, where Harry is staying.

Harry can apologize and has reunited with his old friends in Great Britain, whom he had left after his departure for the United States. He didn’t invite William to dinner.

But the queen invited her grandson to lunch alone, in an attempt to repair the disputes, which include whether or not she was told that her new granddaughter would be named Lilibeth Diana.

Lilibeth is what they call the niece in privacy and according to the Sussexes, she was the first to know. The courtiers were furious. There was talk of a meeting between the brothers after the ceremony of inauguration of the monument.

PUBLIC SCRUTINY ABOUT HARRY AND WILLIAM

After Harry and William’s icy relationship at the funeral of their grandfather, Prince Philip, the eyes of the public will be on this brief but symbolic ceremony, which reflects once again the dysfunctionalities and divisions that Diana, the Princess of Wales, still has. generated 24 years after his death.

Kensington Palace, which was in a state of great nervousness over the inauguration and at the prospect of the Duke and Duchess of Cambridge and Sussex being subjected to new journalistic scrutiny, described the ceremony as a “small event and a very personal moment for the family”.

It’s officially down due to Covid-19, with guests and media limited to a minimum. The reality is that they want control world press coverage, which has been installed in front of the palace, and the reactions.

In addition to the close family of William, Harry, and Diana, his brother, Earl Spencer, and his sisters Lady Sarah McCorquodale and Lady Jane Fellowes, attended by the statue committee and others involved in the process of erecting it.Wiliam and Harry spoke with their uncles.

Harry was explaining to his aunts something that made them wonder and laugh. The two brothers They walked into the ceremony together, dressed in blue, tense but smiling.

The attitude of Prince Charles

Diana’s friends and royal specialists believe that Prince Charles should have stepped in to make this destructive fight do not continue to harm your children and the image of the monarchy.

His two children have had a fractured relationship with their father because of Camilla, his new wife. Harry said publicly that his priorities have not been to be a father but to cement Camilla as queen consort.

But it will be a status that he must negotiate with his two children, who will never say yes to the place that his mother, Princess Diana, should occupy.

Faced with this scenario, it will be the Spencer family and especially Sara, Diana’s favorite sister, who will be able to achieve the reconciliation of her two nephews.

Details of the statue of Ian Rank-Broadley, who has a long history of creating images of the royal family, were not released. Her image of the Queen appears on all UK and Commonwealth coins since 1998.

Rank-Broadley was chosen by the princes in 2017 on the advice of the committee of six statues, whose members include Lady Sarah McCorquodale and Julia Samuel, godmother of Prince George, who was a close friend of the princess.

The committee was chaired by Jamie Lowther-Pinkerton, the brothers’ former chief private secretary. They were present at the ceremony.

The fountain without water

The inauguration of the 2004 Diana tribute fountain in Hyde Park it was an attempt at reconciliation by the Windsors and Spencers after the abrasive speech by Diana’s brother, Earl Spencer, at his funeral at Westminster Abbey.

But the fountain emptied and became a metaphor for the bond. The Queen said in her speech that day: “Memories soften as the years go by.” It was not so.

The statue can be viewed for free by the public from this Friday during Kensington Palace opening hours.

In the absence of understanding, flowers. The palace distributed a detailed layout and planting scheme for the Sunken Garden, which includes more than 200 roses and 300 tulips. It was designed by Pip Morrison.

It was created by a team led by Graham Dillamore, who recalled how the princess used to stop and talk to him and the other gardeners.

Dillamore, deputy director of gardens for the Historic Royal Palaces, said: “While residing at Kensington Palace, Diana, Princess of Wales, regularly admired the ever-changing flower displays at the Sunken Garden and would always stop to talk to me and the other gardeners who cared.

“More than three decades later, I am honored to have been part of the team that prepared the garden for the installation of this statue,” he added.

“We have incorporated several of the princess’s favorite flowers into the design. I hope that visitors to the palace and gardens will enjoy the peaceful surroundings and take a moment to reflect on the princess’s life and legacy,” explained Morrison.

Harry went back to “work”

Harry appeared at the WellChild Awards on Wednesday, one of the organizations he continues to sponsor at London’s Kew Garden.

A true secret that occurred at the end of his fifth day of quarantine. For two hours Harry talked with the boys and their parents and had tea with them.

“Since becoming the patron of WellChild in 2007, this organization and its people have held an extraordinary special place in my heart. I didn’t need to be a parent to feel the impact of this invaluable job. Now I am a father of two, I feel more connected, inspired and amazed at the resilience of these families, who advance with indescribable challenges with the support of WellChild ”, said the youngest son of Prince Charles and Lady Di.

Harry’s presence was kept secret and it was the NGO that distributed the information to the press.