Prince Philip’s funeral: a woman ran half-naked on the outskirts of Windsor Castle 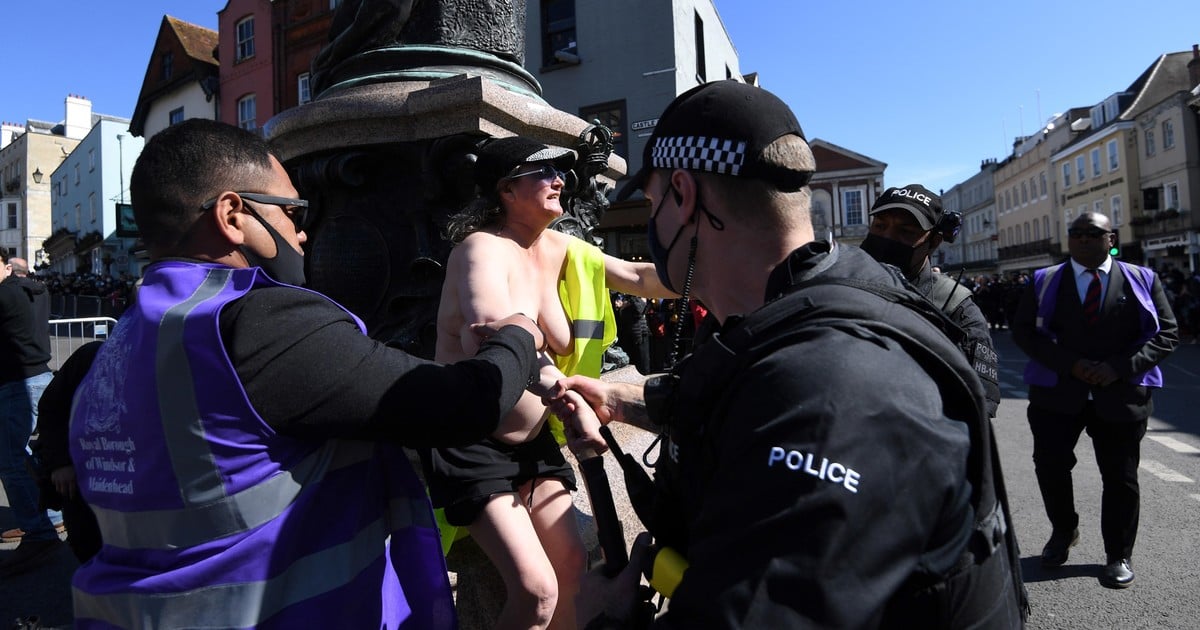 Moments of tension were lived on the outskirts of Windsor Castle during the funeral of Prince Philip of Edinburgh. As the ceremony began with a minute’s silence, the police detained a woman who ran half naked by the surroundings shouting “save the planet”.

After the moment of reflection in the private event, several agents ran out to try to persuade a protester, who protested through the streets dressed only in shorts, sunglasses and a cap and jumped on a statue of Queen Victoria, according to reports British media.

Quickly, the troops managed to arrest the woman, who was removed from the place wrapped in a sheet.

Quickly, the troops managed to arrest the protester who was removed from the place wrapped in a sheet. Photo EFE.

The funeral of Prince Philip of Edinburgh, husband of Queen Elizabeth II of England, who died last Friday, April 9 at the age of 99, began at 7 (Argentine time) in one of the most famous residences of the royal family that It is located in West London.

The private event began with a brief funeral procession on foot. Meanwhile, the coffin, covered with the sword and cap of the prince’s navy and a wreath of flowers, it was transferred from the private chapel of the royal family to another hall of the castle.

The Dean of Windsor, David Conner, delivered a prayer before moving to St George’s Chapel, while representatives of the British Armed Forces took up positions in the central courtyard next to the castle’s royal quarters.

Then he Land rover special that prince philip helped design for over 16 years He entered the courtyard of the castle and the military band began to play, so that later the bearers raised the coffin.

The hearse carries the coffin as members of the Royal Family follow him during the procession of Prince Philip. AFP photo.

The remains of the prince left the castle and were greeted by the members of the royal family for the procession. After a military salute, the coffin was placed on the Land rover. The queen then appeared with a lady-in-waiting in an official Bentley, and joined the group as the national anthem played, God Save the Queen.

The funeral procession, with salutes of honor and the tolling of a bell in a castle tower, was attended by the children of the queen and Felipe: Carlos (heir to the throne), Ana, Andrés and Eduardo. There were also some of her grandchildren (William, Harry and Peter Phillips) and other personalities such as Ana’s husband, Timothy Laurence, and the monarch’s nephew, David Linley.

The procession reached St George’s Chapel, where the Archbishop of Canterbury, Justin Welby, spiritual leader of the Anglicans, and the Dean of Windsor received the coffin. At the end of the religious ceremony, the Duke he was privately lowered into the royal crypt to be buried.

The bugles played The last post, theme used in British military funerals, and Action Stations, the signal that calls sailors to their posts, at the express request of Felipe, who served in the Royal Navy during World War II. The Archbishop of Canterbury gave his blessing and the national anthem sounded until the relatives left the chapel.

"Overprotection of children is the most absolute lack of protection"