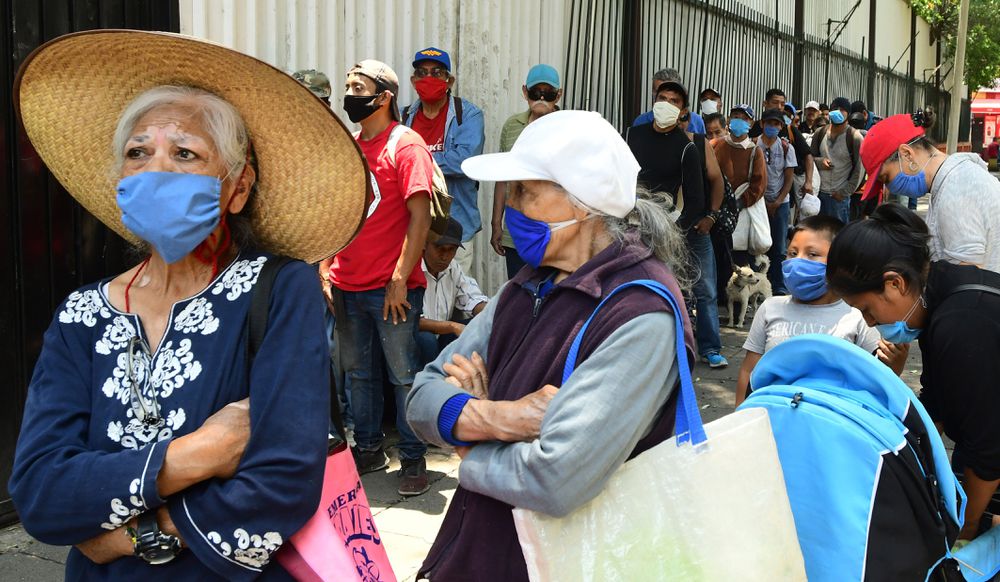 The Covid-19 pandemic has not only claimed the lives of tens of thousands of Mexicans, but has also driven millions into poverty, despite the social programs promoted by the Government of Andrés Manuel López Obrador. The National Council for the Evaluation of Social Development Policy (Coneval) has released a report this Tuesday in which it estimates that due to the crisis unleashed by the new coronavirus, between 8.9 and 9.8 million Mexicans have fallen into poverty due to a decrease in their income, estimates that, according to the institution, “show significant losses in the progress that has been made in social development, threatening the resilience of household income.” Coneval also ensures that the monetary transfers that the Executive makes within its social policy are “temporary measures” that, although necessary, have not mitigated the damage caused by the pandemic in the most vulnerable populations.

“According to ECLAC, Mexico would be ranked as the fourth country that would see the percentage of people living in poverty increase the most, even more than the average for the region, and the fifth that would increase the most in extreme poverty among Latin American countries. ”, Alerts the body. The Coneval explains in its report that in 2018 it was estimated that 61 million Mexicans lived with an income below the poverty line, so under the scenario posed by the covid-19 crisis, that number would increase to more than 70 million poor. This increase in the numbers of poverty is the most dramatic impact that the contingency measures taken to face the health crisis, such as the closure of shops and activities that are not considered essential, have had on the Mexican economy. “The magnitude of the negative effects on the economy, trade, employment, and well-being due to economic and social restrictions represents a significant risk of setbacks in the achievements of social development in recent decades, aimed at improving well-being of the population and contribute to the fulfillment of social rights ”, warns Coneval, which also warns of a financial crisis more serious than that of 2008.

The ravages of this economic earthquake have been most profound in the most vulnerable groups, such as women, indigenous people, the elderly, children and adolescents. In Mexico, 42.4% of women are in a situation of poverty and, of them, 7.4% in a situation of extreme poverty, according to Coneval, which warns that “almost 1 out of every 6 women in Mexico cannot access to the food basket even allocating all their income for this purpose ”. In addition, 14% of them lack health services, for which the agency recommends that the Government “implement comprehensive actions and programs that compensate for the lack of access to social security for women in poverty and mothers who are heads of families with special emphasis on daycare programs, social assistance and maternity benefits ”.

Since taking office more than two years ago, President López Obrador has placed the poor as the flag of his government and has developed welfare programs aimed at reducing poverty and vulnerability in the sectors hardest hit by the crisis. However, Coneval details that these programs have been more of a palliative nature and do not represent a long-term solution to reduce poverty. “Although monetary transfers are necessary, given the changes that the pandemic has caused, it is essential to consider them as temporary measures and promote other measures of a structural nature,” recommends the organization.

In its report, Coneval details improvements that must be made in government programs, which include improving communication between those who are part of these initiatives, greater training for personnel who work in the programs, as well as refining the lists of beneficiaries. “The Comprehensive Wellness Programs analyzed do not fully address the risks people face. Although there is a clear intention of the Federal Government to build a universal welfare system, the programs that comprise it have tended to focus on direct transfers of economic support rather than on prevention, mitigation and attention to the risks that limit access to rights ”, concludes the organization.

In the Söderkratie: Bavaria threatens the corona control state – and the once so proud CSU nods off

Schalke reservist before winter change? Ronaldo Club is said to have Hamza Mendyl on the slip

Cyberpunk 2077 has been the best digital release, returns have had no effect | We are xbox