Poverty and hope in South Africa: diamond fever grips a small village in search of salvation 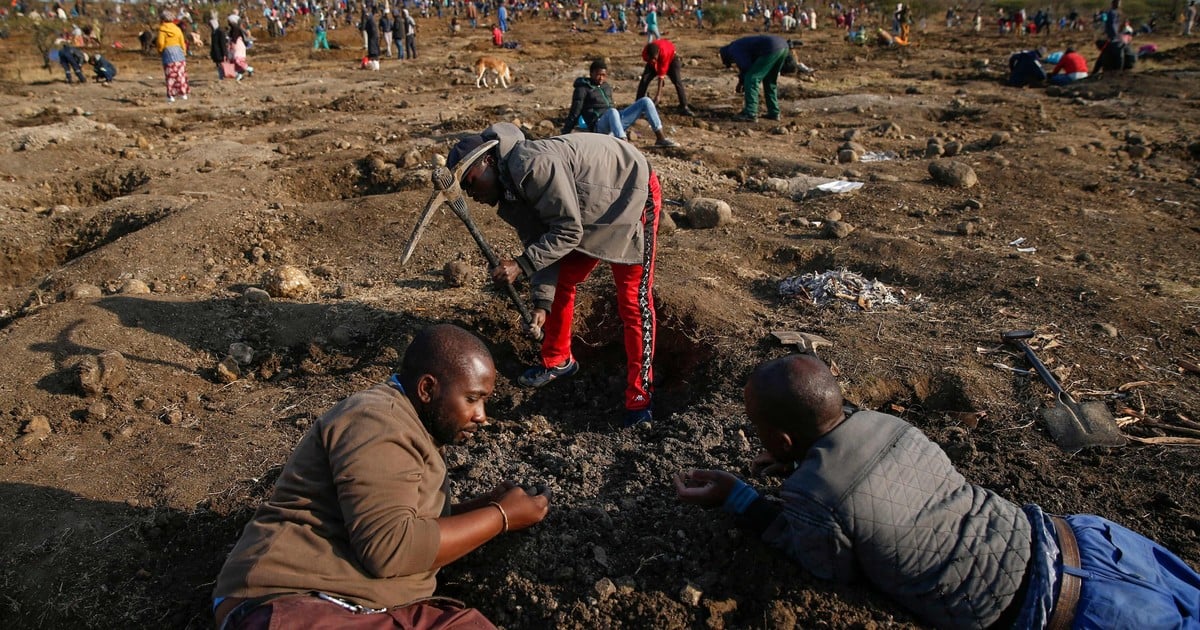 She spits out the dirt after cleaning the pebble in her mouth, convinced she has a fortune. Like Lihle Magudulela, thousands of people flock to this poor corner of South Africa in search of diamonds that are not diamonds.

At dawn, there are already hundreds on the side of this hill in the small town of KwaHlathi, located 5 hours by car from Johannesburg, in Kwazulu-Natal (East).

With shovels, picks or sticks, they stir the earth and break up clods of earth wet with your own hands, waiting for the sparkle of the famous gemstone to emerge.

Photos posted on social media over the weekend they amplified the movement.

With shovels, picks or sticks, they stir the earth and break clods of moist earth with their bare hands, waiting for the sparkle of the famous gemstone to emerge. Reuters photo

“They are true,” Lihle Magudulela, a single mother of three, told AFP. He shows in his hand a small pile of dirty stones, which easily could be vulgar glass crystals.

“I will be able to buy a car, a house, put my children in a private school, “she enthuses.

In the country that unearthed the largest diamond in history, the Cullinan, and made the wealth of the world’s greatest diamond makers, nothing prevents dreaming.

Especially those affected by endemic unemployment, which reached a new record with the covid-19 pandemic and it now encompasses more than 32% of the population.

In the country that unearthed the largest diamond in history, the Cullinan, and made the wealth of the world’s greatest diamond makers, nothing prevents you from dreaming. AFP photo

“We are poor, I don’t have a job. But that could change everything, “says Precious, 38.

Beside him, his 14-year-old son holds in his fist a transparent stone about the size of a ping-pong ball.

He and his 3-year-old sister spent the night digging in the dirt with their mother. “They are not tired, we need the money”he says first thing in the morning.

Legend has it that the 3,106-carat Cullinan, discovered in South Africa in 1905, before industrial mining, was extracted a few meters from the surface off the ground with a pocket knife.

The stone became nine diamonds for the British Crown Jewels.

With a shovel, Thulani Manyathi, 36 years old, pursue your dream of wealth.

With a shovel, Thulani Manyathi, 36, pursues her dream of wealth. AFP photo

“I want to go live in Dubai, have a two-story house. That is going to change our life, “he enthuses with his four daughters who did not go to school to excavate the earth.

South Africa is a world leader in diamond mining. And the mining industry, even in decline, remains one of the lungs of the economy. Represents more than 8% of GDP and almost half a million jobs.

On the hill already the rumor circulates that in the neighboring town of Ladysmith there are foreigners interested in buying the stones.

Rumor has already circulated on the hill that foreigners in the neighboring town of Ladysmith are interested in buying the stones. AFP photo

The experts do not exclude that the stones can be genuine diamonds, although they see it unlikely.

The Department of Energy and Mines said that will send a team of experts in the coming days.

The Department of Energy and Mines said it will send a team of experts in the coming days. AFP photo

He looks at one of the mysterious stones he unearthed during the night and says, “People is wasting time here”.

Tuesday, the police cars they filtered the accesses to the road.

The authorities of the region, who fear overflows, they asked for order and calm last weekend.

On Sunday, invoking the restrictions linked to the covid, they urged the Sunday excavators to leave the place, but they were not heard.