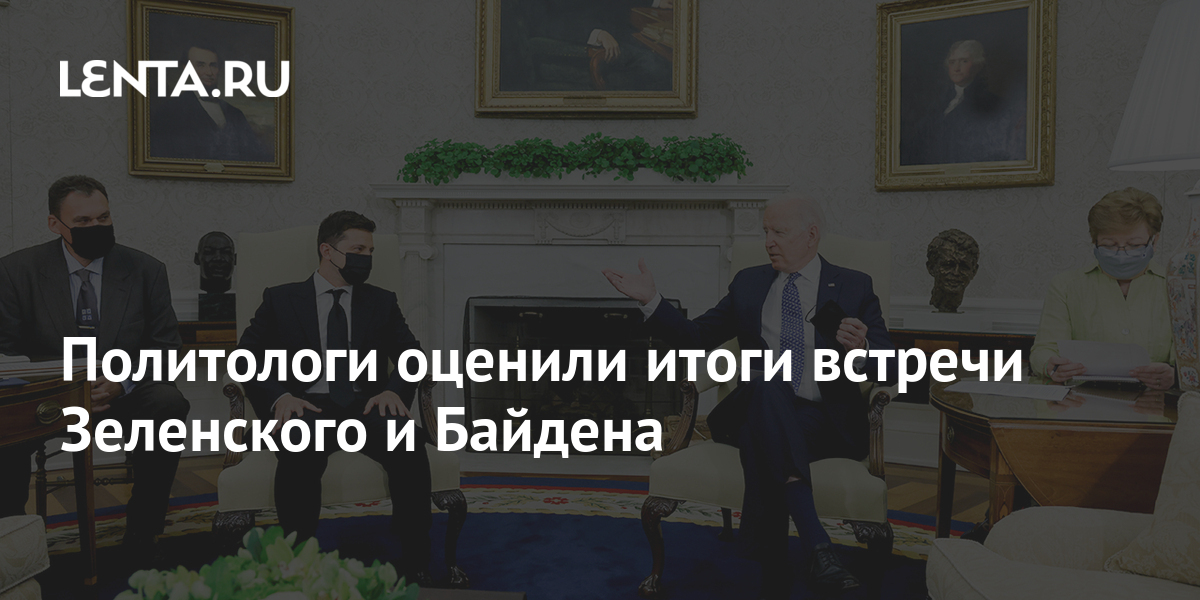 The results of the meeting between the presidents of Ukraine and the United States, Volodymyr Zelenskyy and Joe Biden, cannot be called anything significant; this event Kiev was only trying to “impress” Ukrainian citizens. Oleg Khavich, director of the Institute of Western-Ukrainian Studies, expressed this opinion in a conversation with Lenta.ru.

According to the analyst, the negotiations that took place can be described as a PR campaign designed to increase the popularity of the Ukrainian leader in the eyes of his own electorate. The joint statement made by Biden and Zelensky after a two-hour conversation, as the expert noted, only confirmed the agreements already existing between Kiev and Washington.

Zelensky meets with Biden. Everything! For a significant part of Ukrainian voters, this is enough. What did they actually agree on is a secondary question

He stressed that the trip of the head of the Ukrainian state to Washington, according to the gradation of the State Department, had the status of a working visit by invitation, and not a state or official one. It is for this reason, the political scientist pointed out, that the diplomatic support of the Ukrainian delegation was minimal, the agreements concluded were mostly formal, and no press conference was organized following the talks between the two leaders.

Khavich is opposed in absentia by the Russian political scientist, executive director of the international monitoring organization CIS-EMO Stanislav Byshok. According to the analyst, the fact that its leader is considered as a partner in the “liberal-democratic world” is very important for Ukraine.

“It is in this capacity that Zelensky presents himself. This will give him the opportunity to declare Ukraine as a country striving for democracy at meetings with other leaders of Western countries, ”Byshok said.

The expert noted that the US support for the transit of Russian gas through its lands is also important for Ukraine. The joint statement of the leaders of both countries on this score is an attempt to support the consensus in Western states that Kiev was “offended” by Moscow in Crimea and Donbass, and therefore needs protection.

Ukraine is convinced that Russia must somehow pay for this. Now Russia pays with the sanctions that were introduced against it by Western democracies, as well as Ukraine directly, continuing the transit of gas through its territory. Russia pays twice

He stressed that Biden also won at the end of the meeting: it was important for the United States to show that withdrawal from Afghanistan does not mean a refusal to support countries that are considered promising in the context of integration with NATO.

“Ukraine will receive a certain amount of American weapons. Certainly there will be joint exercises that will make Russia nervous. Probably, Zelensky asked for something more at the meeting, for example, to be supported in the next elections, but he did not receive any serious disadvantages, “Byshok concluded.

Following the meeting of Zelensky and Biden, Ukrainian Foreign Minister Dmitry Kuleba said that a frank conversation took place between politicians, devoid of any “curtsey”. According to him, the Ukrainian leader was able to directly ask his American colleague the questions he was interested in, and the ideas expressed at the end of the negotiations were taken into account by both sides.

He also called the presidents “strong leaders of two strong countries” and thanked Washington for its serious support of Kiev in various directions. “President Zelensky appreciates this support on behalf of the people of Ukraine,” the Foreign Minister said.

Zelenskiy arrived in the United States on August 31. On Wednesday, September 1, Biden received him at the Oval Office. The meeting lasted for about two hours. The heads of state once again opposed the construction of the Nord Stream-2 gas pipeline, the entry of Crimea into Russia and adopted an agreement on strategic partnership between Ukraine and the United States.

As the Ukrainian leader noted after the talks, the meeting was held in a constructive manner, completely devoid of any negativity. At the same time, he clarified that the atmosphere at the negotiations was not “permanently sunny.”