Police forces have lunch on the steps: Green Pass required to access the canteen 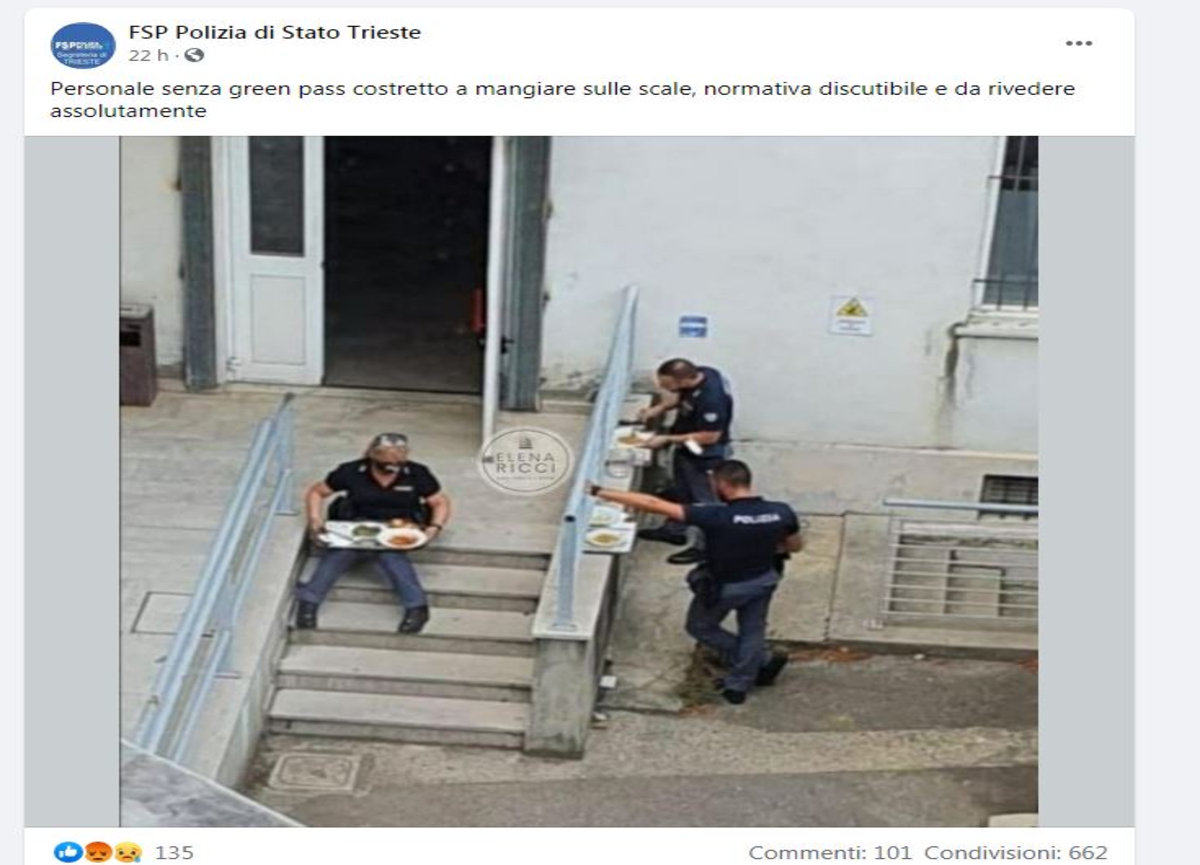 First no, then yes but also maybe: nonsense.

Two days ago, the circular from the Department of Public Security introduces, with immediate effect, the obligation of the Green Pass in all the canteens of the Italian Police Forces. And it is a few hours ago the photo published by the FSP State Police union that portrays some policemen outside a building while they eat a meal with trays placed on a wall or on their legs with the comment: “Staff without Green Pass forced to eat on the stairs, questionable legislation and absolutely to be reviewed”.

The controversy explodes on social media, with the unions on a war footing asking for a meeting with the government and the readers to side with the Police Forces. In fact the procedure doesn’t seem to make any sense. Those belonging to the same bodies and departments, vaccinated or not, can work in the same car, share the accommodation, the office room but cannot, if they do not have the Green Pass, eat in the canteen with other colleagues. Mysteries of the bureaucracy of the Belpaese which imposes, under the same conditions, ad some the law of retaliation and others not. In fact, it has not yet been understood why the Green Pass is required in bars and restaurants, while the managers and customers of hotels and bed and breakfasts are not required, except to access spaces such as swimming pools. Are there perhaps more closed places than other closed places? And even those who participate in masses in an indoor church must not show the certificate.

Yet a circular from the State Police of 5 August explained that the certificate was not required even for the service canteens of Police Headquarters and Prefectures. But the Ministry of Health intervened immediately, canceling all the previous provisions: to access the canteens all the Police Forces must show the Green Pass, thus certifying vaccination, recovery from Covid or the negative outcome of a tampon made in the last 48 hours, running the risk of fines from 400 to 1,000 euros if you enter without owning it. The canteens are usually managed by private companies, some immediately adopted the Green Pass, others continued with distancing and trying to transform closed places into open spaces.

From here, however, two kinds of problems arise.

The first: there are members of the police who, for some reason, have not been vaccinated and do not intend to do so or who have not yet been able to do so. The vaccinations of the police began in mid-February: 6 months have passed since that day. Therefore, beyond what is repeated in unified channels in the “single state newspaper of the virus”, not even among the Police Forces the vaccination campaign is a peremptory order acquired uncritically. The second order of problems: how can those who do not have a Green Pass in the Police Force enjoy the meal, which is a contractual right? Will they have to eat sandwiches until the pandemic ends? Will they not be able to access meals? Will they be entitled to a meal voucher to be consumed elsewhere? Will they have to do it outside the facilities? How will they do in the winter? Will there be facilities for the unvaccinated like buses for black Americans during racial segregation?

The controversy rages on social media.

Rita: “It’s a shame, they are making castes!”

Antonella: “It’s a shame, this is how the State you serve with dignity and pride treats you”.

Re: “Reduced so badly to protect the state that it makes them eat standing up. What a country of m …. which is Italy in certain cases ”.

Silvia: “United so that these absurdities end up for everyone”.

But there is also Emiliano: “It will be enough for you to bow to the rules as you have been expecting citizens to bow for a long time! The rules! In the name of which you have trampled not only our Constitution, but all sorts of human logic ”.

He responds to Emiliano precisely the FSP trade union of the Trieste section which implicitly expresses its perplexities and the nonsense of the government’s choice: “Look, the controversy and our grievance are heading towards a circular sealed out of nowhere that, legitimate or not, is not up to us to decide, has not considered those who legitimately did not want to vaccinate, and who in any case have the right to have a hot meal, the problem is there, we must order but also give non-discriminatory rules. In addition, on the point of the anti-constitutionality of the DLs, no one has yet pronounced themselves and therefore they must be carried out! “

Roberto Di Stefano more cautious than the union of Carabinieri NSC explaining the situation of the weapon to Affaritaliani: “This general hypocrisy amazes me however it is difficult to take a position now because we are waiting for that the General Command expresses itself with a precise provision. They haven’t spoken yet ”.

Instead, it is a true declaration of war that of Luca Marco Comellini of the “Military Union”: “Ready to denounce anyone who tramples on the rights and dignity of our members”. And again: “It is a tragicomic ballet what the military leaders are doing regarding the question of access to service canteens reserved only for holders of the Draghi green certificate. All this roundabout, and we do not want to define it in any other way so as not to fall into foul language, of ups, downs, outside and inside, of you yes and you no, is ridiculing very serious issues. This behavior which does not take into account the human dignity of citizens in uniform is not admissible ”.

And then the example that adds a piece to the nonsense: “Explain these enlightened generals if the sailor Tizio, without the Green Pass from tomorrow will be put to eat his meal hanging off the ship like a plague or if the soldier employed in safe roads or missions abroad he will have to eat his meal on the steps of the canteen as many policemen have been forced to do and do ”.