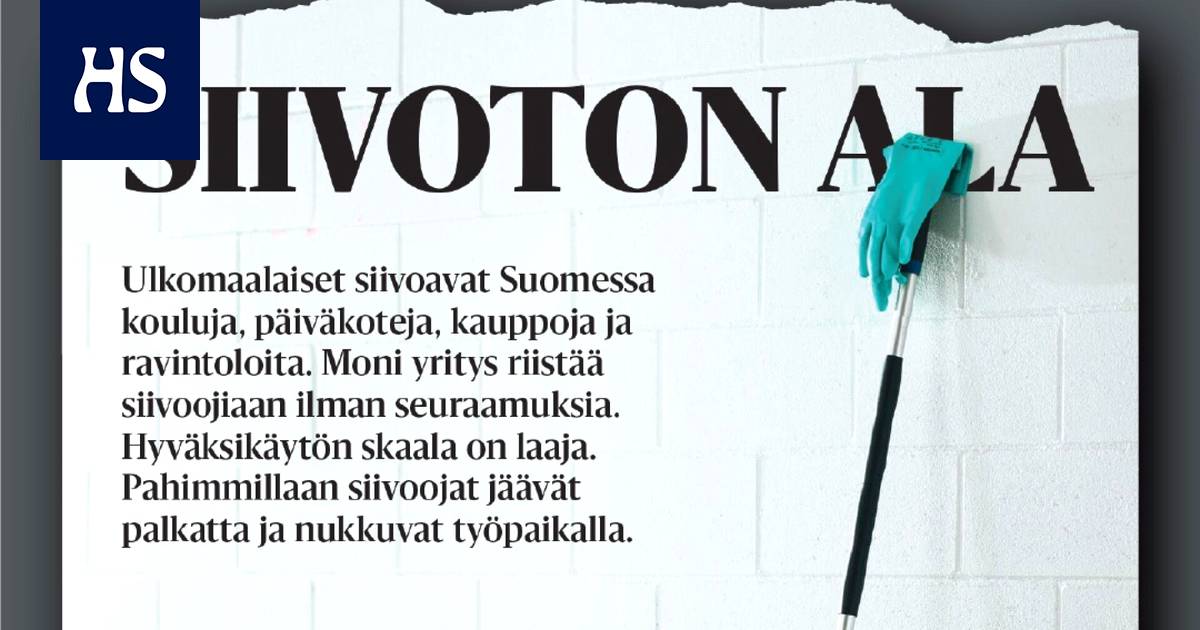 For years, a group of cleaning companies was spun around the Helsinki Metropolitan Area, and many ambiguities have been revealed about its operations. The new police trafficking group is working to better identify trafficking offenses.

In In 2019, the police received a criminal report. It was done by a foreign man who had worked as a cleaner in a company operating in the metropolitan area.

Another announcement came later. This time there was a taxpayer who had noted the ambiguities in the payment of taxes by the same company.

These were followed by a handful of new criminal reports from former and current employees of the cleaning company. Reports were made to several police stations around Uusimaa and southern Finland.

However, it took more than a year for the link between the notifications to be noticed. In the meantime, some of the investigations had already been completed by the police.

The case was first featured in a story published in Helsingin Sanomat in the summer of 2020, which told about several cleaning companies depriving them of labor.

Read more: Uncleaned sector – cleaning companies in Finland employ people who do not get paid, and companies are allowed to continue exploitation without penalty

According to HS data, the cleaners of the companies under investigation have cleaned the K-Group’s supermarkets in the Helsinki metropolitan area and kindergartens in Espoo.

Case Investigation Director Pekka Hätönen according to the investigation involves more than 20 victims who have worked for companies.

Non-linguistic and insecure asylum seekers were hired as cleaners.

The activities of the suspects appear to have been systematic. When one company is suspected of financial clutter, the company has been declared bankrupt and replaced by a new one. For employees, this has only been reflected in a change of company name on paper.

No decent wages were paid, and the working weeks of the cleaners often stretched to six or seven days. Sick leave or other holidays were not known.

The suspected crimes began in 2017.

Right In the latter part of 2020, at the same time as the investigation of cleaning companies continued, the first nationwide investigation team specializing in human trafficking was established in Finland.

The group stationed in the Helsinki police is a major police investment in recent years. A group of nineteen people was set up with additional funding from the Ministry of the Interior. The team is led by investigators Hannu Kortelainen and Pekka Hätönen.

The group mainly investigates the most challenging and large-scale crimes of human trafficking and related crimes.

“Challenging issues have been selected here that are important to investigate, although some of them show that there is not enough evidence in them. But on a phenomenal level, they need to be understood, ”Hätönen says.

The task force also includes three investigators from the Central Criminal Police (CPC). Their job description includes, for example, analytical activities, ie maintaining a snapshot and managing the international side.

The co-operation between the national group and the krp has yet to find its way. According to Kortelainen, efforts have been made to develop co-operation so that teams working in different departments can make better use of each other.

In addition to the cleaning investigation, the group had five cases of work-related human trafficking in an active investigation towards the end of the year. Typical cases are under investigation: they are from restaurants, the construction industry and beauty care companies.

Common to these degrees is the exploitation of vulnerable people, for example by paying very low wages or working a lot of overtime.

In investigating trafficking in human beings, the police are actively cooperating with other authorities and the field. The crimes under investigation come to the attention of the police, for example through the human trafficking assistance system and the crime victim emergency service.

First during the year, the group’s revealing investigation has focused on the sex trade. According to Kortelainen, results have also been obtained there.

According to Kortelainen, the work is mainly an investigation related to websites operating online. There are several sites online that exist virtually solely for the transmission of commercial sex. The sites are very similar to, for example, the Secretarial College, which provided sex services Spanish police closed in 2019.

According to Kortelainen, work still needs to be prioritized, and in the investigation of the sex trade, for example, current resources do not make sense to try to catch sex buyers.

“It is not possible to run after everyone. With the same effort, one can buy a sex buyer or a pimp of twenty women. ”

Expectations against the human trafficking group are large.

At the same time as the number of clients in trafficking assistance systems has increased in recent years, there have been glaring shortcomings in the investigation of trafficking crimes.

Deputy Chancellor of Justice Mikko Puumalainen The study on the investigation of trafficking offenses gives a rough picture of the current state of the preliminary investigation.

Read more: HS’s investigation into police investigations into human trafficking led to harsh criticism and criminal investigation by the Deputy Chancellor of Justice: Illegal solutions and serious skills shortages in the police

The report also mentioned a national working group on human trafficking. Puumalainen urged the group to pay attention to the multi-year preliminary investigation under the project name Nepal II, which should be carried out without delay.

The Deputy Chancellor of Justice’s investigation began with an article published by HS last year that revealed serious problems with police investigations into human trafficking.

Read more: The mother and child worked from morning to night and were allowed to eat once a day – HS found out how the police investigate human trafficking in Finland, and the results are alarming

“This is a problem that has started to swell and is now at the point where it is almost uncontrollable. For one reason or another, no action has been taken in the past [poliisissa] in the best possible way. Now we need to act differently, ”says Hätönen.

“There is a lack of expertise, it has to be admitted.”

According to him, the problems are particularly evident in the work-related human trafficking, the investigation of which has been queued since 2017.

See also  Handicrafts Knitting became so popular during the Korona that yarns were taken out of hand - one of those who got “knit” is Heli Nikula, whose Icelandic sweaters went crazy.

“There is a lack of expertise, it has to be admitted. If the rare crimes of human trafficking are under investigation among other serious crimes, there is no routine and certainty in their investigation as in the case of traditional violent crimes, for example, ”Kortelainen describes.

With one impact group, the situation as a whole is not yet improving. The majority of investigations into trafficking offenses will continue to be conducted at police stations. One of the purposes of the national group is to train Finnish police forces in the investigation of human trafficking crimes.

Expertise is already shared in the police’s national expert organization on trafficking in human beings, which, in addition to the group, has representation from each institution.

Basically all trafficking in human beings is an economic crime, Hätönen describes.

The perpetrators of crimes are constantly inventing new ways to circumvent the law. This was concretely reflected in the investigation of cleaning companies as an abuse of the light entrepreneurship model.

The cleaners imagined working for companies as regular employees. In reality, they had signed a paper stating that they became light entrepreneurs and billed their salaries through entrepreneurial service.

Trafficking in human beings is a financial crime.

The light entrepreneurship model benefited the employer in several ways. Unlike those in employment, light entrepreneurs are not subject to working time legislation. They also do not have to pay supplements or pay holiday pay in principle.

“Contracts with buyers have been made so tight to win tenders that there is no way of surviving them. The obvious risk has been poured into the necks of the employees, ”says Hätönen.

Services the buyer’s side, such as Kesko and the city of Espoo, have not been suspected of crimes but have been heard in the investigation as witnesses. The investigation did not reveal any clear indications that the buyers were aware of the companies’ activities.

Despite this, buyers also benefited from someone doing their dirty work underpaid and without holidays.

Peru, Colombia's next rival, did not pass the tie with Panama