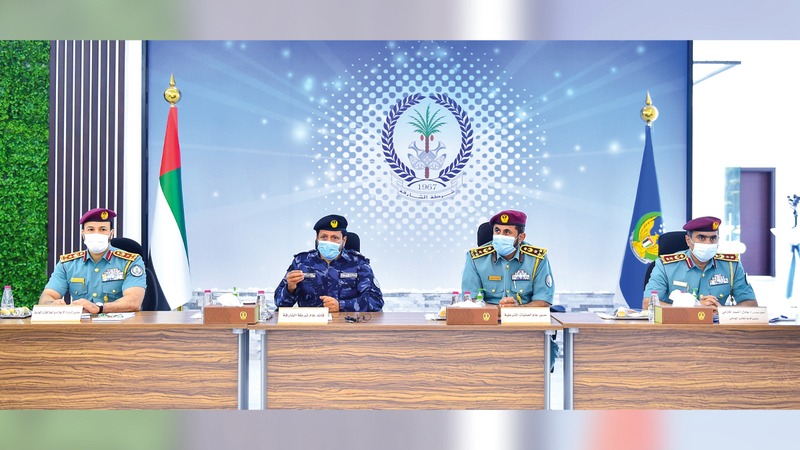 The Anti-Narcotics Department of Sharjah Police, in cooperation and coordination with the Federal Anti-Narcotics Department and the Vital Facilities and Coasts Authority (the Third Squadron), thwarted an attempt to smuggle 215 kilograms of narcotics by six Asians, including crystal drugs, heroin and opium, with a market value of 35 million. Dirhams, which were seized in one of the seaports in the emirate, on board a marine vessel coming from abroad in a qualitative operation called “poisoned rope”.

The Sharjah Police announced the launch of two innovative pioneering projects, the “Anesthetic Fingerprint” project and the “Smart Rehabilitation Clock” project, as proactive projects to enhance the anti-drug system in Sharjah, and the United Arab Emirates in general.

Major General Al Shamsi stressed that everyone is a partner in preventing the dangers of drugs, the scourge that threatens the entity of families, and the young generations, who are the most promising hope in building the future, calling for solidarity and solidarity in the face of this scourge dangerous for all.

He added that the competent authorities formed a team to monitor and monitor the movement, and set up a tight ambush that was prepared in cooperation and coordination between the joint federal teams to follow up the smuggling process, and as a result of the investigation, and the prior monitoring of the marine means they use to come to the country, and the exchange of tactical information, the anti-drug force was able to seize the network members authorized to enter and promote these quantities, numbering six Asian persons.

He explained that the proactive security follow-up of the activities of the criminal network, the accumulation of field and inspection experiences of the teams participating in the seizure operations, cooperation and good planning, contributed to the dismantling of the smuggling scheme, as smugglers worked internal cavities with columns, corners, and corners of the marine vehicle to hide the narcotic substances, so as not to be detected. Upon reaching the port, however, their attempts failed, and a severe pre-emptive strike was dealt, before they began to dispose of the narcotics and introduce them to the state.

He added that 182 boxes of various sizes were taken out, along with bags and rolls, containing 209 kilograms of crystal drug, 6.7 kilograms of heroin and opium, with a market value of about 35 million dirhams.

He pointed out that by confronting the six defendants, they confessed to bringing narcotic substances into the country, for the purpose of storing and distributing them. Accordingly, the defendants and the seized items were referred to the competent authority to take the necessary legal measures.

The Director General of Police Operations, Brigadier General Ahmed Haji Al-Sarkal, said: “The initiatives that were launched and announced coincided with the International Day for Combating Drugs, which falls on June 26 of each year, and we wanted to initiate some future and proactive solutions to confront the challenges posed by drugs, through Two pilot projects, “Anesthetic Fingerprint” and “Smart Rehabilitation Clock”, have been working on these projects for a long time to reach the desired goals.

The Acting Head of the Criminal Laboratory Department at the Sharjah Police, Colonel Engineer Adel Ahmed Al Mazmi, revealed the launch of “Anesthetic Imprint”, as an innovative project that holds intellectual property at the Ministry of Economy, as it contributes to taking proactive measures to stop smuggling and exporting narcotic substances from their sources, and promoting them, so that The outputs shall be unified with internal and external partners from government and private agencies.

He explained that the mechanism of the “Dope Fingerprint” project is based on the physical analysis of narcotic substances, in terms of (color, weight, shape, nature of the substance, and classification of smells), and chemically by using modern device techniques, to know the basis of their volatile and non-volatile components, quantitatively and qualitatively, Classifying and creating an integrated database on narcotic substances

He added that the importance lies in knowing and identifying the sources of narcotic substances, how to link promoters to their external sources, tightening the screws between promoters and drug users, tracking the progress of smuggling operations, striking global promotion networks, combating transnational crime, and knowing modern manufacturing methods, by identifying chemical precursors, and from Then enact laws that govern their circulation, in addition to defining the relationship between local promoters, by creating a database, and then coordinating with the relevant global institutions “UNODC.” All these proactive measures seek to limit the spread of narcotic substances.

The Director of the Special Rehabilitation Center of Sharjah Police, Lt. Col. Amer Al Harmoudi, stated that the launch of the “Smart Rehabilitation Clock” project, the first of its kind in the world, came within one of the smart innovative projects for Sharjah Police employees, as it was invented and obtained intellectual property rights with the Ministry of Economy, Before Lieutenant Sarah Muhammad Al-Zarouni, the smart watch follows the drug users after completing the treatment period in the rehabilitation center, by monitoring and measuring vital signs, which are the person’s heart rate, blood pressure, sleep rate, stress rate, and other signs that monitor signs Addiction, and the smart watch targets juvenile addicts, the female category, the self-treatment applicant, and those placed in the rehabilitation center of the Public Prosecution order.

The inventor of the smart watch, Lieutenant Pharmacist Sarah Al Zarooni, said: “This qualitative innovation came in order to achieve the strategic goal of the UAE, which aims to innovate and enhance the quality of life, and in line with the United Nations project for supervised community treatment, the smart rehabilitation watch was invented to follow up on health and psychological cases of users, And a solution to the challenge facing rehabilitation centers in following up on cases after their exit and the end of the treatment period.”

Al-Zarouni explained that the smart rehabilitation watch includes smart features and icons, represented in the personal information icon, vital signs, and the camera icon, so that a person can take a personal photo, if requested to do so by the center, in addition to the permanent operating mode feature, and continuous data synchronization, And the feature of notifications with motivational phrases that he “can”, in addition to its inclusion of the GPS system, and the feature of asking for help or assistance at any time, confirming that it was keen to employ and use all relevant technology to achieve leadership in the implementation of the project.

She added, “The design of the clock is compatible with males and females of different ages, as the special rehabilitation center works from the follow-up room, around the clock, to follow up on the health of the recovering person and his vital signs, to prevent him from relapse and return to addiction, in addition to providing psychological sessions for the recovering remotely, It enables him to communicate with psychiatrists at any time, to seek advice or help, and all of these efforts are aimed at reducing the rate of recidivism, preserving family and social ties, and accelerating the process of his reintegration into society.