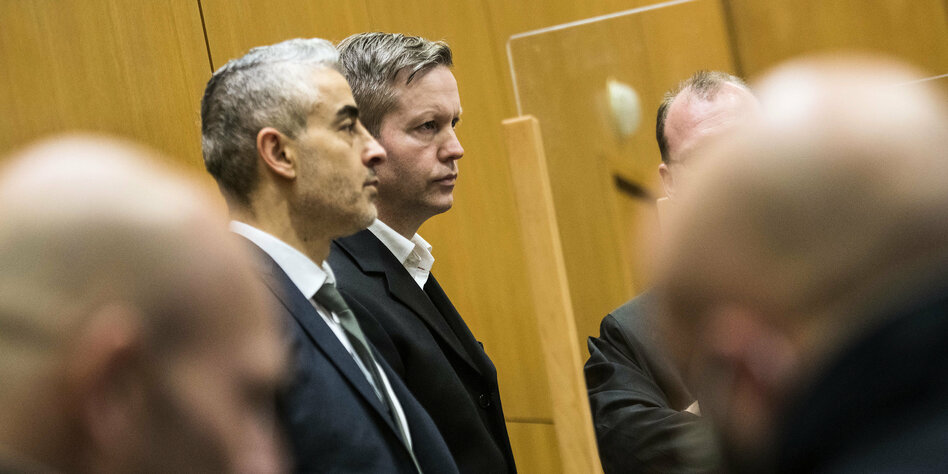 In the Lübcke trial, the defense lawyers plead manslaughter instead of murder – with bold justification. For Stephan E. they demand a penalty discount.

The lawyer Mustafa Kaplan and Stephan Ernst will be in the courtroom in Frankfurt on January 12, 2021 Photo: Thomas Lohnes / dpa

FRANKFURT AM MAIN taz | It’s a memorable process. Since June 2020, the murder of Walter Lübcke, Kassel’s regional president, has been tried before the Frankfurt / Main Higher Regional Court. The first right-wing extremist murder of a politician in decades. A trial with three confessions from the accused. With a completely unclear role of the co-defendant Markus H. A victim family who defends the credibility of the perpetrator. And now with a memorable plea.

On Thursday, defense lawyers Mustafa Kaplan and Jörg Hardies think it is the main defendant Stephan E. And instead of the murder of Walter Lübcke, they only demand a conviction for manslaughter – with no particular severity of guilt, without preventive detention. A bold demand. Kaplan leaves the question of the years of imprisonment open. He pleads for a “proportionate, but also acceptable judgment”.

The fact that Stephan E. was involved in the killing of Walter Lübcke is beyond dispute. His DNA was found on the victim’s shirt and on the murder weapon. The right-wing extremist also confessed to having shot Walter Lübcke on June 1, 2019 on his terrace in Istha near Kassel – out of pent-up hatred over his criticism of opponents of refugees at a citizens’ meeting in Kassel in 2015.

Later, however, Stephan E. revoked his confession and accused the co-defendant, Markus H., of being a shooter. In the process, then version three: He shot himself, but Markus H. was at the scene and had previously incited him.

Defense attorney Kaplan also speaks of an “unusual procedure”. He does not question Stephan E.’s guilt. Yes, this one shot. Kaplan blames the confusion of confessions on Es former defenders, especially Frank Hannig from Dresden. He simply made up the second confession, “a smear theater of the worst kind”. The Federal Prosecutor’s Office was also responsible, as they allowed the lawyers to visit the prison without Stephan E.’s request.

Kaplan emphasizes, however, that Markus H., a former friend of Stephan E. and also a neo-Nazi, was jointly responsible for the crime. Markus H. took Stephan E. to Lübcke’s citizens’ meeting in 2015. He put the video online with a shortened statement from Lübcke, which then triggered right-wing hate postings. He took Stephan E. with him to shooting training and was there when he was spied on in Istha.

And Markus H. was also on Walter Lübcke’s terrace, as Stephan E. said. H. came in front, Stephan E. from the side, the men had threatened Lübcke, then the shot was fired. Only in this constellation can the smoke traces at the crime scene be explained, says Kaplan. “We defense lawyers have no doubt that Stephan E. told the full truth.”

For Kaplan, however, the act is not murder. The legally necessary feature of treachery is missing. Lübcke was defenseless. But he was not taken by surprise because he saw the men coming. And there is a lack of base motives, as Stephan E. wrongly assumed that he had acted in the interests of a – asylum-hostile – general public. This belief stems from the fact that he previously moved in a purely “right-wing populist and right-wing extremist bubble”.

And if the court should assume a murder, at least one particular gravity of the guilt is out of the question, explains Kaplan. Because the one-shot act was no more brutal than other murders.

They are daring theses. In any case, the Federal Prosecutor’s Office has no doubt that it was a murder: The act had been planned for a long time and had a base motive with the hatred of a political opponent. The prosecutors also assume that Stephan Es’s first confession is true and that he sneaked out onto the terrace alone – that is, acted insidiously. Your demand: life imprisonment with subsequent preventive detention.

Even the Lübcke family has no doubt that it was a murder. But she believes that both defendants were actually at the scene – and demands the maximum sentence for both.

“Done all that he could do”

Defender Kaplan just doesn’t want that. He points out that Stephan E. regretted the act and asked the family for forgiveness. That E. gave a comprehensive testimony and thus made an indictment against Markus H. possible. That he even partially exempted his defense lawyers from confidentiality. That he wanted to leave right-wing extremism behind with the help of a dropout program. “When has there ever been something similar in a state security case?” Asks Kaplan. “Everything that Mr. E. could have done, he did. More is not possible.”

Kaplan therefore urgently asks for a penalty discount for Stephan E. He exuberantly praises Judge Thomas Sagebiel: “You are a wonderful chairman.” maybe your only chance ”. Sagebiel must now redeem this, said Kaplan. “It also needs a signal for others that it is ultimately worth making a statement.”

The defense attorney also thanks the Lübcke family, who are sitting in the hall. For their “excellent” plea, in which they spoke out in favor of Stephan E.’s credibility and listed 30 indications of Markus H.’s complicity. And for the fact that the family let him and Hardies with them on the terrace in September 2020 to look at the crime scene. “That wasn’t a matter of course.” Kaplan turns to the widow: “It shows that your husband’s values ​​live on.” In the end, he promises the family that Stephan E. will also answer their questions about the crime after the trial. “This is unlimited and irrevocable.”

Markus H.’s defense lawyers, two lawyers in the scene, then issued a statement to criticize the perpetrator’s “cordial agreement” with the victims. Together they try to get Markus H. to the crime scene. But this will be “refuted” in their own plea on Tuesday. Markus H. himself is silent on the allegations.

It is still unclear what role Markus H. actually played in the act. The court released him from custody as early as October because it questioned Stephan E.’s statements. The federal prosecutor’s office only sees the aid and demands nine years and eight months in prison for him.

Stephan E. is, however, charged with a second act: for a knife attack on the Iraqi Ahmed I in Kassel on January 6, 2016. He is said to have stabbed the refugee from behind near his accommodation. Stephan E. denies the act. And the defense lawyers consider the evidence inconclusive. The DNA on a knife found by Stephan E., which is similar to that of Ahmed I., could also come from someone else. And that E. reported that he had threatened a migrant on January 6, 2016, I mean a different process.

The defense attorneys accuse the Federal Prosecutor of wanting to force a conviction here and there in order to enable preventive detention. Kaplan, on the other hand, demands an acquittal. This means that preventive detention is no longer possible, as this can only be imposed in the event of several serious crimes.

The court will now decide whether this happens. The verdict is due to fall next Thursday.