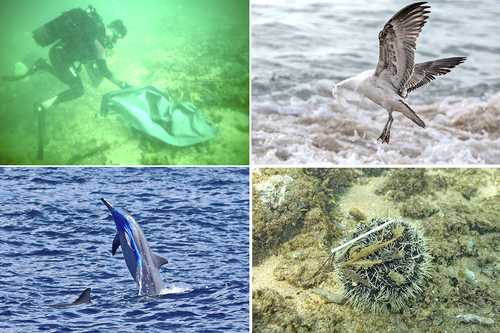 Stockholm. The enormous quantities of plastics and chemicals produced by humanity have exceeded bearable “planetary limits”, for which production must be urgently limited, several scientists have concluded for the first time in an investigation.

“The effects that we are beginning to observe are so large as to affect critical functions of the Earth and its ecosystems,” said Bethanie Carney Almroth, co-leader of the study from the Stockholm Resilience Center (SRC), in an interview. with Afp.

There are 350 thousand synthetic products invented by humanity present in considerable volumes in the atmosphere or directly or indirectly in the environment, added the scientist.

The study was released when negotiations begin on plastic pollution “from the source to the sea”, an issue that will be addressed by the United Nations Organization at the end of the month in Nairobi.

Although all efforts to prevent these materials from being present in the environment are good, the magnitude of the problem prompts scientists to advocate more radical solutions, such as determining maximum production limits.

See also  It was worth it? After a great whistle, Natalia Jiménez delights at the Mazatlán Carnival

Recycling has had mediocre results, as evidenced by the fact that less than 10 percent of the world’s plastic goes through this process, for a production that has doubled since 2000 and currently reaches 367 million tons.

Currently the plastic present on Earth represents four times the biomass of all living animals, according to scientific studies.

“What we’re trying to say is enough is enough, we can’t take any more. Perhaps you have to put limits on production, say that you don’t have to produce but up to a certain level,” said the researcher, who lives in Sweden.

For several years, the Stockholm Resilience Center has been carrying out benchmark work on “planetary boundaries” in nine domains (climate change, freshwater use, ocean acidification…)

The purpose is to determine if humanity is in a permanent “security space”, or if, on the contrary, the limits have already been crossed and the future of the planet is threatened.

The “new entities”, that is, the chemical products created by humanity (plastics, antibiotics, pesticides…), as well as metals in their unnatural concentration, are so far unknown and the conclusion of all this seems complex. .

See also  Debanhi Escobar: they reveal videos of the young woman walking and entering the motel

“We are just beginning to understand the long-term and massive effects of these contaminations,” said the researcher.

Not only are these products uncountable, but the data on their risks is non-existent or is subject to industrial secrecy. But by definition they correspond to the industrial age, contrary to the other parameters studied on the “planetary limits” that make it possible to compare over 10 thousand years or more.

Pesticides that kill organisms indiscriminately, ingestion of plastic by living beings, hormonal or reproductive effects, chemical contamination threatens the environment, since it damages the physical and biological processes on which life rests, a phenomenon that is aggravated when the product has a long life. permanence.

“There is talk of 350 thousand different substances. There is no knowledge about the vast majority of them, their production amount or their stability, the effect on the environment and the toxic level”, stressed Carney Almroth.

“We know that some products are, but most are ignored,” he added.

See also  With the Smorgasburg food market, Miami wants to become the culinary "Garden of Delights"

Even the most complete databases, such as Reach in the European Union, only cover 150,000 products, of which only a third are subject to advanced studies regarding their toxic level.

The team then focused on what is known, and those partial elements were enough to reach an alarming conclusion.

“With these scattered fragments and the evolution over time (…) we conclude that all the indicators point in the wrong direction,” explained the scientist from the University of Gothenburg.

For the four co-authors of the study, “there is still time to reverse the situation; however, we require urgent and ambitious action on a global scale.”

“Of course, there is no panacea because many of these products are used and necessary for our lives, although many others are not,” admitted Bethanie Carney Almroth.

However, for her, all the efforts at the level of initial production or waste management will not prevent it from being necessary to lower the volumes manufactured. HP Omen 16 on offer on Amazon

Like many current competitors, the HP Omen 16 uses a 16-inch display. So the gaming notebook is reasonably portable and... Sergio Torres attacks against everyone