Pictures .. The Northern Hemisphere is witnessing a partial eclipseكس 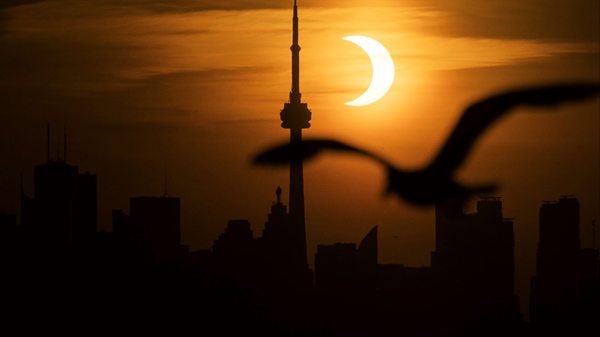 Today, Thursday, residents of the northern hemisphere witnessed a partial eclipse of the sun from Canada to Siberia, passing through Europe.
At the climax of this “annular eclipse”, the moon could be seen slowly passing in front of the sun, transforming it for a short period into a thin luminous ring like a “circle of fire” in the evening.

This event was witnessed by a small number of high latitudes in an area equivalent to about 2% of the Earth’s surface: northwest Canada, the far north of Russia, and northwest Greenland. In the Arctic, the occultation rate was about 88%.

The phenomenon was visible, but partly over North America and a large part of Europe, including France and Britain, in addition to part of northern Asia. It lasted about two hours between 11 a.m. and 1 p.m. in France, with a peak between 11.55 a.m. and 12.20 p.m.

Fans of following the phenomenon had to use special glasses, as experts stressed the need not to watch the event directly, even with sunglasses, because this may cause burns in the eye, which may not be treatable.
This is the first annular eclipse of 2021 and the sixteenth of the twenty-first century. This astronomical phenomenon occurs when the Earth, Moon and Sun become parallel.

While the angular diameter of the Moon is less than that of the Sun, a portion of the Ring of Fire remains visible.
The total eclipse occurs when the diameter of the moon becomes exactly parallel to the diameter of the sun when viewed from the earth, which plunges part of the earth into darkness for a short period. This phenomenon is rare and the world will witness it on the fourth of next December, but it will only be possible to see it from Antarctica.