Pictures.. A reassuring study on the effect of cosmic radiation on organisms 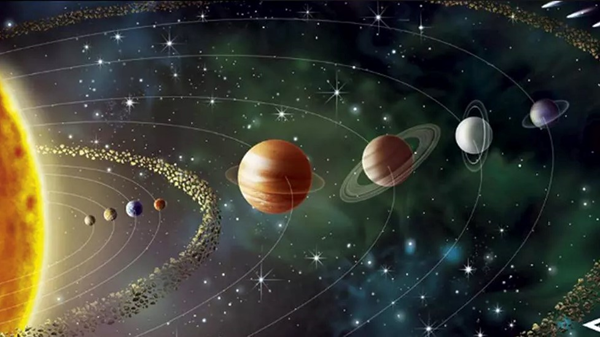 Some believe that humans should one day leave Earth to live on another planet, but without this a major obstacle is that these adventurers will be deprived of the protection provided by the atmosphere of the blue planet from space radiation.
In a large-scale study, researchers analyzed the potential long-term impact of space radiation on the reproductive capabilities of humans and their companion animals if they ever move to live on another planet. The results of their experiment, published in the journal Science Advances, seem reassuring in this regard.

After spending nearly six years in orbit on the International Space Station, lyophilized mouse semen gave birth to healthy baby mice after returning to Earth.
Space radiation includes “solar wind and cosmic rays” from the sun or from outside the solar system, and they are capable of damaging DNA.
But according to the researchers, “freeze-dried semen can theoretically be stored in the International Space Station for a period of about two hundred years” without any problem, according to the study’s main supervisor, Teruhiko Wakayama, a professor at Yamanashi University in Japan.

The project took off in 1997, when Teruhiko Wakayama and his team demonstrated that mice could actually be born using lyophilized semen.
In this way, samples can be kept at ambient temperature for more than a year. Otherwise, these samples had to be sent through refrigerators that are not available inside the missiles.
Years later, researchers collected the semen of 12 mice and placed them in six boxes containing 48 ampoules each smaller than a pen.
Three of the cans remained in Japan for comparison, and three were flown to the International Space Station in August 2014. At the station, astronauts placed the cans in refrigerators at minus 95 degrees Celsius.
A first can was moved to Earth nine months later, to prove the feasibility of the experiment.
A second box remained on the station until May 2016 (two years and nine months). Finally, a third canister was brought back to Earth in June 2019, after being kept for 5 years and 10 months in space.
The researchers observed the sperm DNA. And “by recording the damage caused to the DNA, no significant difference was observed between samples kept in space for three or six years, and those preserved on Earth,” according to Teruhiko Wakayama.

Once the eggs were fertilized, ‘small’ chromosomal abnormalities were detected in the DNA that kept them out of gravity for years. But these damages did not affect its growth.
The embryos were later grown in the laboratory, before some were placed in female mice. In all, 243 young mice were born from semen that remained for three years in space, and 168 of those that remained for about six years.
By analyzing the birth rates of these embryos, there was no difference between those preserved on Earth or in space, whether for three years or six years, according to Teruhiko Wakayama, who confirmed that all the young mice were “looking normal” without detecting any deformities.
Three mice, born from semen kept for three years on the International Space Station, were studied for their lifetime. The researchers noted an expected life span just below average. However, these results must be confirmed by a study that is still underway on other models born from semen that has been kept for about six years in space.

In the end, “baby space mice” were mated, which led to the birth of new animals that produced their own third generation.
The study showed that all mice “descendant from them were normal”.
A co-author of the study considered that these results are “positive for the long-term conservation of genetic resources.” Instead of taking a large number of live animals, people who might move to another planet will be able to transfer lyophilized semen, according to Teruhiko Wakayama.
However, the ISS’s orbital altitude (400 km) still benefits from Earth’s magnetic shield. At higher altitudes, the radiation is stronger, and complementary experiments will need to be carried out in the future, according to the researchers.