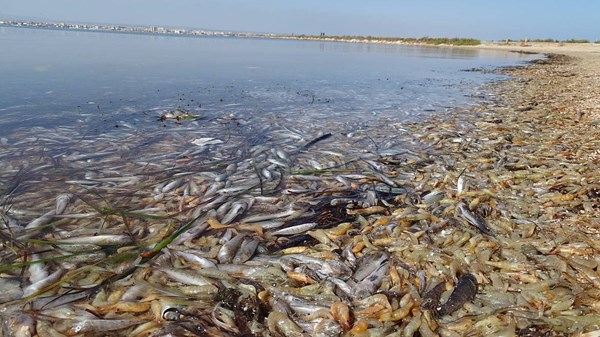 A huge amount of dead fish, estimated at about 20 tons, was washed up on the banks of one of the largest saltwater lakes in Europe.

Once a tourist attraction and sanctuary for marine life in the Antarctic region of Spain’s southeastern Mediterranean coast, the Mar Menor lake has seen a significant decline in fish stocks in recent years, with two similar mass deaths occurring in 2016 and 2019.

Residents began noticing dead fish and crustaceans since Monday.
“It’s still washed up today. We estimate that the number of dead fish so far is about 20 tons,” said Jose Luis Garcia, director of marine life programs in Spain, of the World Wildlife Fund.

The regional government has blamed a wave of mass deaths on recent temperatures.
Dozens of demonstrators, wearing T-shirts bearing the words “Save Mar Menor”, gathered and chanted “We want solutions.”