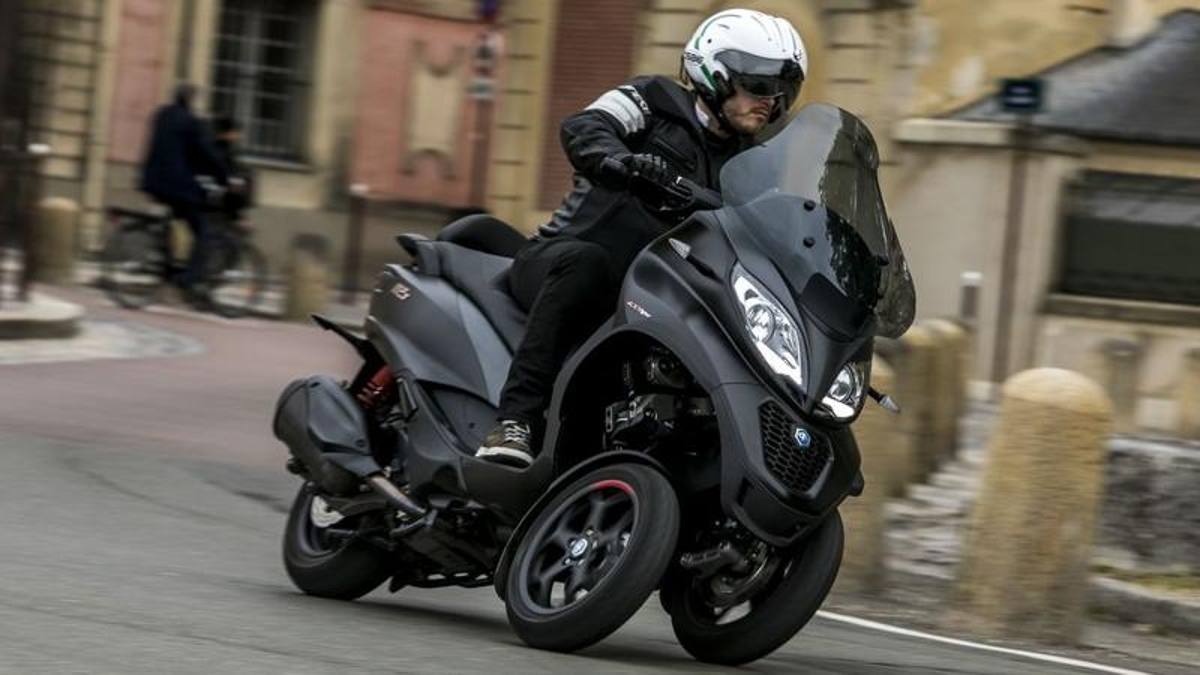 The new 400 Hpe engine inherited from cousin Beverly represents a bit of squaring the circle for the Piaggio MP3 range: we went to try it in Paris, a city that the Pontedera three-wheeler has managed to conquer since the very beginning.

15 years have passed since its debut on the market, three decades during which Piaggio MP3 has never ceased to be talked about. Dismissed by the “purists” but highly appreciated by those who approached it without preconceptions or prejudices, the three-wheeler from Pontedera literally created a segment out of nothing, being the vanguard of an entire category of vehicles. Since 2006, MP3 has not only been the subject of inspiration also from other brands, but has been sold in over 200,000 units in Europe in the 125, 250, 300, 350, 400 and 500 cc displacements: numbers that, at all the more reason for such an unconventional means, are undoubtedly those of a resounding success. In 2021, after having disappeared from the radar for a few years, a 400 cc version returns to the fore which, by mounting the brand new HPE (High Perfomance Engine), is exactly halfway between the smallest 300 and the top of the range of the MP3 line-up, the maxi with a half-liter displacement. To test the new MP3 400 Hpe we went to France, in Paris, a city that has been literally struck by it since the very beginning of this three-wheeler.

The engine of this new MP3 400 Hpe comes directly from the two-wheeled “cousin”, the Beverly of the same displacement that we have already had the opportunity to try. This single-cylinder four-stroke, born on the basis of the previous 350, maintains the compactness and lightness of the unit it replaces, and despite the introduction of the Euro5 homologation it manages to improve its performance. The maximum power, delivered at 7,000 rpm, grows up to 35 HP, while the torque rises to 38 Nm released at 5,500 rpm (both of which reach their peak lower in the tachometer than to what happened on the previous version). Equipped with liquid cooling and four-valve cylinder head, the 400 Hpe engine is combined with a CVT automatic transmission with multi-plate clutch in oil bath.

At the chassis level, the front suspension with articulated wishbone with four aluminum arms – also equipped here with a locking system, to remain in balance even during stops – and the double rear shock absorber, adjustable in preload in four positions, are confirmed. As for the braking system, on the 13 ”tilting wheels there are two 258 mm discs while a 240 mm solution has been adopted at the rear; There is also a two-channel ABS system developed with Continental which is paired with the switchable traction control. Here too we find the pedal control for integral braking, while an important difference with the 500cc older brother is the absence of reverse gear.

Aesthetically speaking, we are not witnessing revolutions, since the design is fundamentally unchanged compared to its predecessor. A refresh to the style comes from the new full LED lighting system with DRL lights, but actually the abundant lines of the MP3 are starting to suffer a bit the weight of the years. A similar argument can be made for the instrumentation, clearly inspired by the world of the automobile with the two round side quadrants surrounding a centrally placed multifunction LCD screen: undoubtedly well readable and full of information, the cockpit, and more generally the dashboard. command, they now show a bit of their side when it comes to looks.

On the other hand, progress has been made on the technological front, in particular that of connectivity. The Piaggio Mia system makes its appearance on the MP3 400 Hpe, a presence that translates into the possibility of connecting Android and iOS smartphones to the vehicle to manage music, calls, emails and messages also through voice commands. This multimedia platform also allows you to view, through the dedicated app, numerous information on the route and status of the vehicle, as well as to use the convenient functions find me is follow me to easily find your vehicle even in the most crowded parking lots. To recharge the devices, a USB socket has been set up, placed in the glove compartment with a drawer and placed right above the instrumentation.

Piaggio MP3 400 Hpe is available in two versions, the standard and a more aggressive version, called Sport. The first combines gray painted wheel rims with two liveries, Glossy Black and Materia Gray. The second, enriched by captivating red details and distinguished by dark-colored wheels, can be purchased in the Black Meteor, White Moon, Silver Comet and Blue Sapphire colors. Prices? To take the “smooth” version home you need 9,190 euros, while for the Sport you need 200 euros more for a total of 9,390 euros.

For those unfamiliar with him, the first few meters riding an MP3 are always a kind of unknown. Even with this 400 Hpe a few corners are enough to get the right confidence and realize how, after all, the Piaggio three-wheeler is dynamically similar to everything we’ve ever driven. Except for one thing: the ability to forgive mistakes that would have disastrous results on high scooters, such as passing over cobblestones, wet cobblestones, rails and other irregularities in the ground with a serenity that the more conventional two-wheeled colleagues certainly cannot. to allow. Safety is great, and not just the perceived one: stability and feeling with the front end are at the highest levels, even if obviously the price to pay is handling that cannot earn praise.

In the heart of the city

In urban traffic you can also appreciate the way in which Piaggio has managed to contain the overall dimensions. True, in the lower part the front end appears decidedly massive, but on balance this represents a limit only in the case of … particularly dense “gatherings”: the handlebar offers in fact a perfect measure to evaluate the space occupied by the front wheels, the whose amplitude can hardly be an obstacle to maneuvers. In the urban jungle, the locking system of the front suspension is of great help, a device that can be activated below a certain speed and that allows you to stop without putting your feet on the ground. To restart, simply deactivate it with the same switch on the handlebar used for insertion, or simply turn the throttle knob.

COMFORT ON ALL TERRAINS

We didn’t like the braking too much, a bit spongy and not particularly powerful. In fact, to decelerate vigorously you have to squeeze the lever well, trusting the excellent functioning of the ABS and the insurance offered by the three wheels. Also postponed the pedal brake that acts both on the front and on the rear: perhaps in this case it is just a matter of habit, but honestly we have not found a great feeling. On the other hand, the behavior of the suspensions is excellent, which do not raise the white flag even when the conditions of the road surface exceed all tolerance limits. Every roughness is absorbed with a reference kindness, and on the other hand, comfort has always been one of the strengths of MP3. In this regard, we cannot fail to praise the seat, really comfortable thanks to a correct triangulation and a saddle that has little to envy to a sofa. Wide, well-shaped and just the right soft, it hides a compartment of exaggerated dimensions equipped with an electric opening that can also be operated remotely: in terms of load capacity, MP3 is really the station wagon of scooters, but if that’s not enough you can always resort to one of the 37 and 50 liter rear trunks proposed in the optional catalog. Both are equipped with a backrest that adds to the standard one, because on this three-wheeler even the passenger is highly regarded and it is possible to travel without any problem even in two.

Three wheels all year round

The aerodynamic protection is also excellent: the tinted windshield with integrated hand guards avoids turbulence even at high speeds, creating a real bubble around the driver. Speaking of performance, the 400 cc HPE engine is confirmed as brilliant and rich in torque, although in terms of speed performance, the weight increase compared to the Beverly is perceptible. On the other hand, the excessive vibrations that we had found on the two-wheeled cousin here seem to magically disappear: a difference that we detected with some pleasure. A final positive note that is worth underlining is the presence in the official catalog of an oversized windshield, two leg covers and a heated accessory kit (grips and cloth) for those who intend to use MP3 even in the harshest season. That is the very large part of MP3 customers, who look at this scooter as a means to be used without worries 365 days a year, in all weather conditions.

Even if from some points of view the MP3 project is starting to feel a bit the weight of the years, this unconventional scooter continues to represent a reference not only within the three-wheeler, but also in the more comprehensive commuting sector. This 400 Hpe version represents the best compromise between the 500 (perhaps even “excessive” in certain situations) and the smaller 300. The price of 9,190 euros is actually a bit salty, but on the other hand the suspension system patented by Piaggio is very refined and this is also reflected in the final cost of the product.

Like it: on-board comfort is excellent, as is stability; the 400 Hpe engine perhaps represents the squaring of the circle of the range; excellent load capacity, essential for a scooter of this type.
Do not like:the design and certain details of the dashboard now appear a bit aesthetically dated; spongy and not too powerful braking; abundant price.