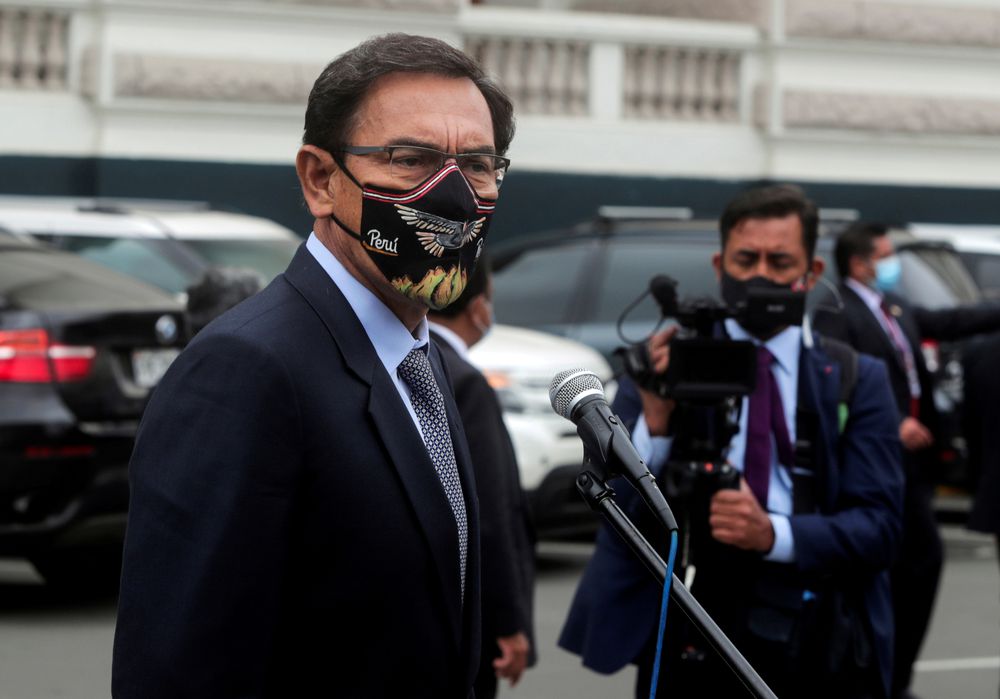 Former Peruvian President Martín Vizcarra, current candidate for Congress, will not be able to leave Lima without judicial authorization while he continues under a prosecutorial investigation for the alleged receipt of bribes between 2013 and 2014 when he was governor of Moquegua. This Thursday night the authorities also announced that the ex-president will have to pay a fine of $ 27,000 in the next ten days and that from now on he is prohibited from declaring to the media or on social networks about the process against him. According to the prosecutor Germán Juárez, who is investigating the case called ‘Construction Club’, Vizcarra improperly received more than 821,000 dollars -calculated at the exchange rate of those years- from two construction companies that won bids for works at the Moquegua Hospital and the Lomas de Ilo irrigation project.

The prosecutor had requested 18 months of preventive detention for Vizcarra and although the judge in the case finds “serious suspicion” that the former head of state has committed crimes such as bribery and illicit association, she does not see danger of flight or obstruction of justice, therefore, he rejected the request and ordered other restrictions. The ‘Construction Club’ refers to more than 25 construction companies that illegally agreed to distribute public works concessions, at least since 2011.

The magistrate has also ordered that Vizcarra register every 30 days in the digital system of the Judiciary, which replaces biometric control while the state of emergency continues due to the covid-19 pandemic. During the hearing held on Thursday night, Álvarez maintained that “there are serious and well-founded elements of conviction regarding the alleged commission” of crimes in the Hospital de Moquegua and Lomas de Ilo cases. The prosecutor had presented numerous reports of telephone calls between Vizcarra and the representatives of the companies that won the concessions in 2013 and 14, statements of witnesses from meetings, and the testimonies of four whistleblowers: one of them the former Minister of Agriculture José Hernández, who said he had received money to be delivered to the former governor of Moquegua. According to the tax investigation, in the Hospital de Moquegua case, Vizcarra requested an undue commission of almost 2% of the cost of the work from the construction companies ICCGSA and Incot in exchange for approving the concession contract. The amount of the bribe amounted to more than $ 464,000 at the then exchange rate, paid in two parts, one in 2014 and the balance in 2016.

In the case of the Lomas de Ilo irrigation, the prosecutor Juárez has proven that when Vizcarra was working as a regional authority, he gave privileged information to the Obrainsa-Astaldi consortium to present an economic proposal according to the amount budgeted by the Regional Government of Moquegua for that project. . The politician would have asked for 2% of the cost of the work, the prosecutor and the judge said at the hearing on Thursday, and also offered not to challenge the company’s selection when awarding the contract. In this case, the amount of the bribe amounted to more than $ 357,000 at the then exchange rate, paid in two parts, in 2013 and 2014. The former president also faces another tax investigation due to the alleged irregular hiring of a friend of his for consultancies for $ 50,000 in the Ministry of Culture. This Friday, the politician was summoned to a diligence of the Public Ministry to recognize his voice in the recordings of conversations with his collaborators. Likewise, the prosecution is investigating him for the irregular application of Sinopharm vaccines, since he was clandestinely immunized in October, together with his wife and his older brother, with vials that the Chinese pharmaceutical company sent outside of the phase 3 clinical trial being carried out in Lima .

Subscribe here to the EL PAÍS América newsletter and receive all the informative keys of the present time of the region.

Zakharova commented on the fall of Biden when boarding number one

The Lebanese President: We stand by Jordan in the face of what affects its security and stability