Peru takes a break after the proclamation of Pedro Castillo 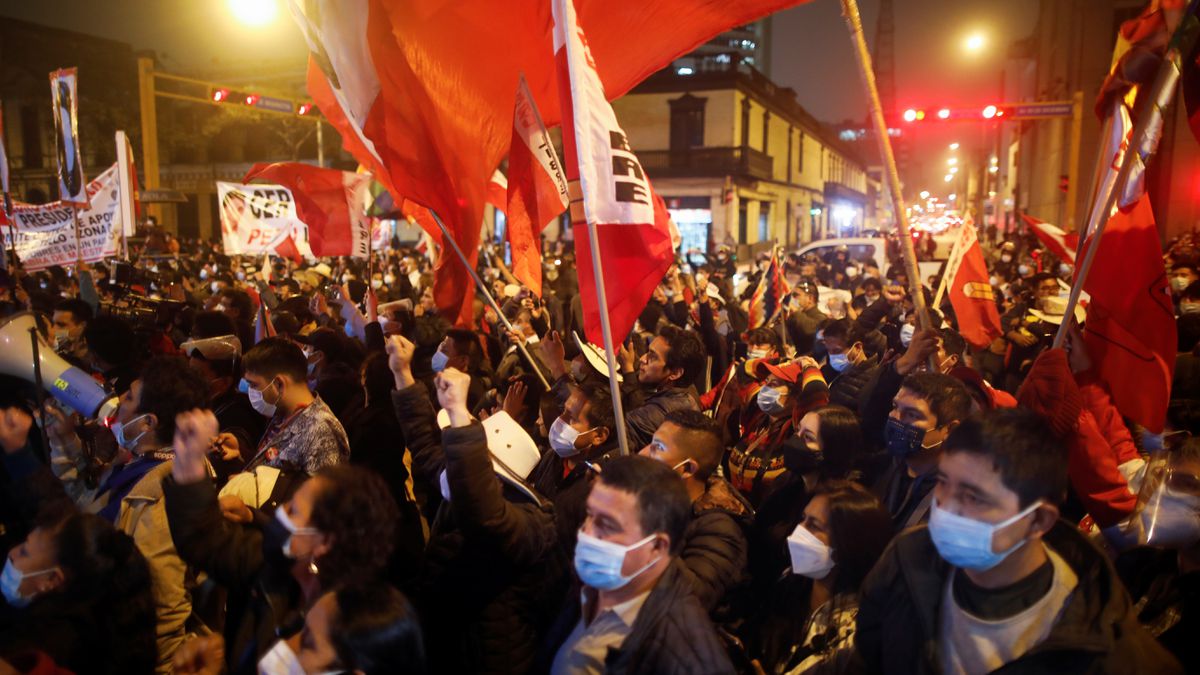 After the proclamation as president-elect of the leftist rural professor Pedro Castillo, dozens of heads of State and Government, embassies and national and international organizations have greeted the union leader, while in the camp of followers stationed more than 40 days ago in front of the main headquarters of the electoral tribunal woke up this Tuesday with relief and hope.

Peruvian President Francisco Sagasti and the United States Embassy were the first to react after the solemn digital session in which the highest instance of the National Elections Jury proclaimed Castillo as the winner of the June 6 ballot, with an advantage of more than 44,263 votes.

The delay of more than a month in making the winner official – since the end of the official scrutiny in mid-June – was due to the 271 requests for the annulment of thousands of Castillo’s votes submitted by the lawyers of Keiko Fujimori, the opponent of the second round and leader of the Popular Force party.

The Fujimori challenges were declared unfounded in the first and second instance of the electoral court, in proceedings that began on June 9 and ended on Monday. The National Elections Jury denied them as there was no evidence of impersonation or forgery of signatures of the polling station members where the rural teacher won en masse, as Fujimori and far-right allied politicians pointed out.

While the electoral court resolved the appeals filed by Fujimori, the daughter of the autocrat Alberto Fujimori called on her followers to demonstrate in the streets “against fraud.” In the marches, his sympathizers carried the Burgundy flag and tiki torches – like the American supremacists – while a Fujimori shock group attacked Castillo sympathizers, attacked private establishments or tried to violate the security fences to take the Government Palace.

“Nine days before the Bicentennial, may this be the beginning of a new stage of reconciliation, consensus and unity,” Sagasti tweeted. In addition to the greetings from the presidents of Argentina, Bolivia, Colombia, Chile and Ecuador, among others sent by Twitter after the proclamation, the Secretary General of the OAS, Luis Almagro, and the Spanish President of the Government, Pedro Sánchez, also spoke. .

At noon on Tuesday, in a written statement, US Secretary of State Antony Blinken congratulated the Peruvian people for “making their voices heard in free and fair” general and legislative elections. “We look forward to working together with the administration of President-elect Castillo to strengthen the Peru-US relationship and move towards a better future,” Blinken added.

In the local scenario, the first institutions to greet the president were the oldest specialized association in electoral observation, Transparencia; the anti-corruption NGO, Proética; and the Unique Union of Peruvian Education Workers (Sutep), the most important teaching center.

In addition, the guild of the medium-sized company Sociedad Nacional de Industrias and the main employer, Confiep, expressed their willingness to work with Castillo, who in the second round campaign qualified his economic proposals and promised legal stability and respect for investments. In a statement released on Tuesday, Confiep asked the president-elect to speed up the vaccination process.

Among the reactions of national politicians was an open letter from the three elected congressmen of the Morado party – center-right – among whom is the former Minister of Education, Flor Pablo. “A presiding teacher has the beautiful opportunity to do political teaching. We want that when the children of our rural areas see him swearing, they say: ‘We too can get there’. For many compatriots his coming to power means vindication and hope ”, the text indicates.

The camp of ‘all bloods’

Castillo has yet to receive his president-elect credential at a ceremony organized by the electoral tribunal. The appointment of his team, the transition meetings with the outgoing Sagasti cabinet, and the swearing-in on July 28 will then be pending. “They have never taken so long to proclaim, we hope there are no more legumes,” claimed a citizen while cleaning a poster in front of the main headquarters of the National Elections Jury on Tuesday morning.

More than 460 people have lived there for 42 days, in the camp that faces the National Elections Jury. Its coordinator, Sergio Gonzáles, from Arequipa, says that “the most difficult thing in these weeks has been subsistence.” Gonzáles, a 41-year-old member of the Peru Libre party, says that on Monday night he lived through Castillo’s proclamation with some tears, like some others, because it is the first time that one like them reaches the presidency.

“Many people hope to have a government for the great majority, that looks a little at the most forgotten, with a more social economy. It took 200 years for us to have a peasant, a rondero, a teacher in the government for the first time: someone from the people who has been in the struggles, “added González, referring to the teachers’ strike led by Castillo in 2017.

According to the coordinator of the “all bloods” camp, there were citizens from 22 regions of the country and most of them hope to stay in Lima until the swearing-in on July 28. At the other end of the camp, Elías, a 41-year-old peasant, takes down his tent and folds a blanket: he gets ready to go back to his land. “I came 40 days ago from the San Martín region, Juanjuí province, in the Amazon. The most difficult thing in these weeks has been the uncertainty, but the objective was achieved. I feel immense joy, but we have gone through difficult times: I hope for a better Government, of change for the country, ”says the farmer.