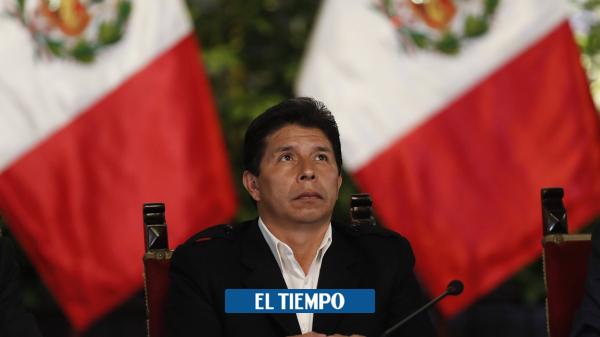 The president of the Subcommittee on Constitutional Accusations of the Congress of Peru, Lady Camones, reported this Friday that the receipt of a constitutional complaint filed by the National Prosecutor’s Office against President Pedro Castillo, with which the parliamentary tour of the same began.

Camones read, at the beginning of the Subcommittee session, a brief summary of the document sent by the attorney general, Patricia Benavides, who accuses the president of being the alleged perpetrator of the crimes of criminal organization aggravated by his status as leader, aggravated influence peddling and complicity in the crime against the public administration in the form of collusion (fraud).

After giving an account of the request, Camones briefly informed the members of the legislative working group that the complete document will be sent to their emails and went on to review other issues pending resolution by the Subcommittee.

See also  Coronavirus The next variant could be far more dangerous than omicron, experts in the Observer warn

The legislator from the right-wing Alliance for Progress (APP) party added that, after reporting the complaint, the Subcommittee will have about ten business days to qualify the request.

(You may be interested in: Peru: Prosecutor’s Office accuses the president of allegedly leading a criminal gang)

Demonstrations in favor of President Pedro Castillo, in Peru.

He added that, because “it is a historical fact, which puts democracy, legal and political stability in the country at risk, it is being given priority attention in respect of deadlines and the process.”

Given this, the spokeswoman for the leftist caucus of Free Peru, Kelly Portalatino, announced that her group will file a motion of censure against Camones if it does not give the same priority to complaints filed earlier, including against prosecutor Benavides.

See also  Peru: anti-government protests reach the capital with the 'taking of Lima'

The Peruvian Executive defends that article 117 of the Constitution establishes that the president can only be accused, during the exercise of his functions, for four specific cases, among which are treason or preventing elections, but not for crimes of corruption or common

For this reason, the Minister of Culture, Betssy Chávez, constitutionally denounced Benavides before Congress, for an alleged violation of the Constitution, abuse of authority and prevarication.

On Thursday, Chavez also asked the National Justice Board (JNJ), the body in charge of appointing, ratifying and dismissing magistrates, to dismiss the attorney general for having committed a “very serious infraction” of the Constitution.

(Also: Corruption investigation puts the president of Peru and his family in check)

Demonstrations in support of the Peruvian president.

In the event that the accusation against Castillo is admitted by the Subcommittee on Constitutional Accusations, it will enter an evidentiary stage in which the accused can be summoned to exercise his defense, before the working group issues its final report.

If this report proceeds, it will go to the Permanent Commission, as a prelude to the vote in plenary, where, in order to prosper, it will require the votes of half plus one of the legislators in the chamber, less than the two-thirds of the Chamber that requires a vacancy (removal) motion.

The legal journey will not end in this instance, since if the plenary approves constitutionally charging Castillo and presidential immunity is lifted, the complaint will return to the Prosecutor’s Office to present a formal accusation before the Judiciary.

Orionids: when is the best time to see this meteor shower and what is its origin