Peru: a virtual presidency in the face of hostile scenarios and undemocratic demands 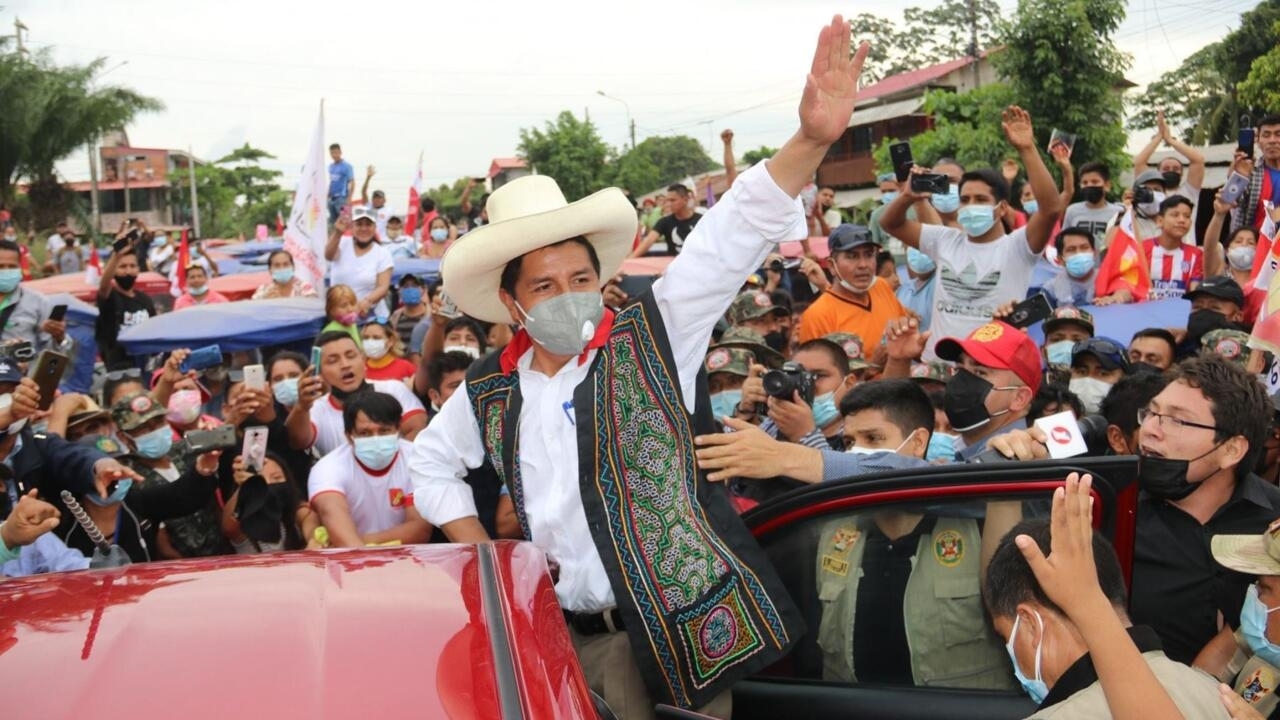 Although the candidate Pedro Castillo has already emerged as the president-elect of Peru, the electoral Justice of that country has yet to resolve complaints of alleged irregularities in the process. Most of the appeals have been filed by the candidate Keiko Fujimori, who argues, without evidence, a “table fraud”. While the discourse continues to escalate, the eventual new mandate is looming weak and cornered by the opposition.

In Peru, two political realities are being experienced at the same time. The first, of a clear victory in the official count of the presidential elections of June 6: with 100% of the minutes, Pedro Castillo, candidate of the Peru Libre party, appears as the winner. The difference with his opponent, Keiko Fujimori, of the Popular Force party, is just over 44,000 votes. However, it is still not possible to make official which presidential candidate won the majority citizen support.

The other reality is what prevents the first from being defined: both parties, but much more that of Fujimori, contested a significant number of electoral records. Popular Force alleges a massive “fraud” at the voting tables by people in favor of Peru Libre. For this reason, it requests to eliminate more than 200,000 votes. But so far no appeal has been accepted in the first instance due to lack of foundation or due to extemporaneous proceedings. As long as possible appeals are not irreversibly resolved before the National Elections Jury, the results will not be announced.

However, at this point, a significant subtraction in the final results that allows Fujimori’s comeback seems counterfactual.

The time taken for the definition has given rise to an escalation of claims, mainly from the disadvantaged shore. Last week, hundreds of Popular Force supporters protested in Lima under the slogan ‘Respect my vote’, alluding to the theory of systematic fraudulent acts. Additionally, an elected congressman from the Popular Renovation party, related to Fujimori’s candidacy, published on his social networks a request for the elections to be annulled, warning that the new government would suffer from legitimacy.

In the week, inclusive the host of a TV channel suggested “taking the Government Palace”, dismissing the current president Francisco Sagasti before the constitutional change of command.

In addition, it was reported that groups of followers of Fujimori have protested for several nights in front of the houses of electoral authorities, such as the president of the National Elections Jury, Jorge Salas Arenas, and the head of the Electoral Processes Office, Piero Corvetto.

A new government that is forecast weak

For the political scientist Paolo Sosa Villagarcia, the eventual administration of the president-elect will inevitably start from a vulnerable and weakened position. First, it should be remembered that Castillo is not a leadership figure within the Peru Libre party, which invited him to run for President. And, on the other hand, fears about his candidacy – especially due to his initial economic projects in the campaign – led to intense polarization, in which half of the country, led by Lima and the elites, continues to prefer Keiko Fujimori .

“Castillo does not present himself as a strong elected president. He has marked disadvantages such as not having control of his party and, in addition, an important opposition above him. One of the great fears that spread during the campaign was that Castillo “is a communist option,” which in reality is almost impossible because communism, in general, has originated from social revolutions and not from elections. But, let’s say, that fear is maintained on the part of a sector of the citizenry that Castillo will also promote a ‘Chavista’, ‘Bolivarian’ project, ‘that reproduces what was seen in Venezuela.’ However, due to its known weaknesses, I think that having an authoritarian regime with Castillo is more likely to have much more misrule than in the last five years, which were already quite chaotic, ”Sosa explained to France 24.

At 100% of the records processed and counted, Castillo prevails against Fujimori with 44,058 more votes. In the 2016 election, Pedro Pablo Kuczynski also beat Fujimori by a narrower margin: 41,057.

At the management level, the political scientist Kathy Zegarra Díaz points to a possible trial-error and counter-march scenario; something similar to Castillo’s behavior as a candidate, due to his lack of political experience. In addition, there are the apparent struggles within his party, founded and led by Vladimir Cerrón, a former governor of the Junín region with a sentence for corruption.

“I think there are very few certainties about what a Pedro Castillo government would be like because, during the campaign, it was seen as contradictory at various times. It must even be said that he had some unreasonable or even undemocratic comments and then he retracted on them. It is also valid to take into account that he is a relatively new member of Vladimir Cerrón’s party and that this is the one who initially promoted the party project towards the presidency. I think that, once the presidency is assumed, it will be essential to know if Castillo will truly maintain a roadmap (a moderate plan, different from the original ideology of Peru Libre) and also if he will have a team that inspires confidence from an eventual cabinet of ministers ” , estimates Zegarra.

Paulo Vilca Arpasi, also a political scientist, argues that, in general, the spread of political polarization can lead to a very rapid deterioration of the current Executive Power. In addition, it questions the little openness that both parties have shown to integrate in projection with other political actors, beyond alliances or second-round endorsements.

“Be it Castillo or even Fujimori, it is clear to me that the government that emerges will be weak. Not only because the victory is given by a narrow margin of votes, but also because of all these circumstances of tension. On the other hand, there is also the fact that none of the contenders – especially Castillo – has built political bridges. To win being requires votes, but to govern it is essential to do politics. It generates a lot of concern because a government of Pedro Castillo only with his circle or only with the left has little chance of moving forward. It would be understood that right now the attention is on the electoral phase being resolved, but the political exercise has also been and continues to be important. Finally, legitimacy is also gained with the latter ”, Vilca notes.

The relationship with Congress, a latent problem

In the last five years, Peru had four presidents and two different Congresses. This, after serious political crises, mainly framed by the tension and confrontation between the two powers. The Congress that was elected in the elections of last April 11 appears fragmented. Of the 120 congressmen, 37 belong to Peru Libre, Castillo’s party, and 24 are from the Fujimori group Fuerza Popular. However, by coincidence on the right, several other groups are emerging as allies of the latter party.

The political scientist Paolo Sosa considers that the eventual interaction between a Castillo government and Congress is marked by something that did not happen in the 2016 elections, and that is that the current of delegitimization against the incoming power has begun without even closing the electoral process.

“The questioning of Castillo’s presidential capacity has begun before he assumes power. That is a very important difference because with Pedro Pablo Kuczynski (who beat Fujimori by a narrow margin of 41,000 votes), for example, the confrontation from the Fujimori majority Congress arose and grew as the months in government passed. In the current case, the scenario is already adverse for Castillo without even having been declared president. This may account for the degree of fear that has been outlined about Castillo from a certain sector because Kuczynski was, after all, a right-wing candidate and, therefore, not so uncomfortable for the political, business elite or for the majority of the media. communication ”, says Sosa.

For the political scientist Kathy Zegarra, new political crises as or more complex than those experienced in the recent five-year period cannot be ruled out. He warns that, if there is no joint will from Congress, the practice of extreme political control such as the presidential vacancy due to permanent moral incapacity (which was interpreted against Martín Vizcarra in 2020 to remove him) will continue to be at hand.

“I believe that Castillo will have a very difficult Parliament to dialogue or reach consensus. We have already seen what happens when a president does not have a majority in Parliament or when he is not popular as a political asset. It doesn’t look good. These days, we have heard political leaders suggesting illegal issues to rewind the election just weeks after a change of command. Undemocratic attitudes are bad signs. In reality, I believe that stability will depend much more on the political will of the new congressmen than on the efforts Castillo can make. But, going back to something more core, the very institutional weakness of the political parties in Peru makes this integrated path difficult ”, explains Zegarra.

The also political scientist Paulo Vilca indicates that the relationship between the eventual government and the new Congress will be determined by three important milestones: the internal election of the President of Parliament; the selection from the Executive of his first cabinet and the negotiation for the vote of confidence; and, finally, what will happen to Castillo’s campaign offer for a new Constitution. “I believe that these three moments, depending on how they approach or negotiate, could round off a projection of what the Congress will be like with the Executive and vice versa,” he said.

In addition to facing a hostile political environment, the next presidential administration must focus on an agenda that is already a priority: the management of the pandemic, the continuity of vaccination and the way out of the economic crisis.

Other topics of special attention are the strengthening of education, the fight against corruption, citizen security and the response to social conflicts in different regions of the country. The new assumption of ruler is constitutionally reserved for July 28, the anniversary date of Peru’s independence. Precisely in 2021, the South American republic reaches its bicentennial.