Pedro Emmanuel: Referees are required to protect the players 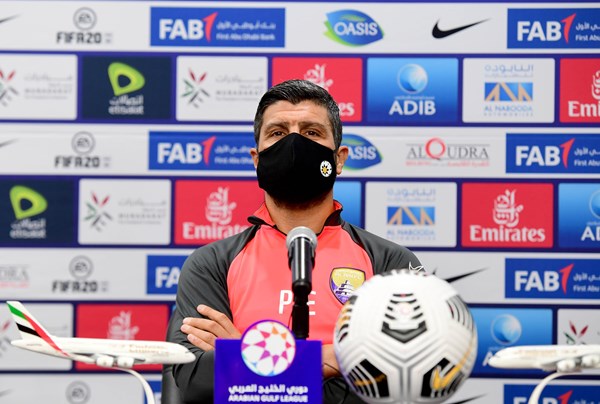 Portuguese coach Pedro Emmanuel, Al Ain coach, said that the time between the confrontation of Bani Yas and Ajman is “short”, and in the last round, the “leader” presented a more balanced performance, and the only difference was to obtain 5 achieved chances, but we scored one goal from them, while it happened. Bani Yas got two chances, and he did not waste them, and this made a big difference in the match, however I was happy with our performance and not happy with the result.
He added: Now we need the three points in all our remaining matches, more than ever, as the season is nearing the end, and we want to be among the front teams, and if we played our previous matches with the same balance that we appeared in the last round, our results will be better, because we are In that match we deserved a better result, but we did not get her three points.
And about Caio Canedo injury, he said: I think we should think about it, because as a coach, the fans share with me, and all football fans, we want to see the best players, and the last game is one of the strongest examples of the bad side of the game, because Caio was obstructed from Back, it is true that the Bani Yas player touched the ball, but at the same time he “kicked” Caio in the foot, and the referee did not take any action against the player for committing this mistake. The second goal at a time when we were playing well, and now Caio is absent from the team, and I do not know how long he is away, and now we miss one of the most important players in the team, who has reached a good technical and tactical level.
He added: Not everything was in our interest, especially at the present time, and therefore we have to maintain the presence of the best players in the upcoming matches, for me, it is something that disappointed me, not only because we lost the result of the match and its three points against Bani Yas, but because we also lost. The services of some players, as a result of their exposure to injury, is a problem for us, and we cannot do anything to bypass it, unless the referees make their efforts to protect the players, and therefore the match.
And he said: Being a team that has a fighting spirit does not mean that you are the most committed mistakes, and Bani Yas committed 16 mistakes, compared to only 9 mistakes, and this is a good aspect for us, as our team had an offensive tendency, and every time we lost the ball it made The players made a great effort to recover it, and they avoided making mistakes, and the referees should take into account this aspect well because we lost the efforts of one of the most important players and at a critical time this season, and I hope that he has recovered from this injury before the AFC Champions League matches, which is very important for us, Where we suffer from the absence of a number of players.
He added: We are separated from the end of the season by a few games, and we strongly want to get points for our match against Ajman, and we know that the opponent needs points at this critical time, and we realize that it will not be an easy match, and Ajman players have a high level of physical fitness, and they are fighting for Obtaining the ball, and we realize how important it is to have the ball and control the course of the match during our possession of the ball, and when we lose it, we have to have the fighting spirit to regain it, just as we played our previous game, and to have a quick reaction, if any player lost the ball, and to record Goals, unlike what happened in the previous game, where we got 4 to 5 scored chances, and we only scored once.

Blockade on the Suez Canal: delay for German consumption