Pedro Castillo leads Keiko Fujimori in Peru, according to survey 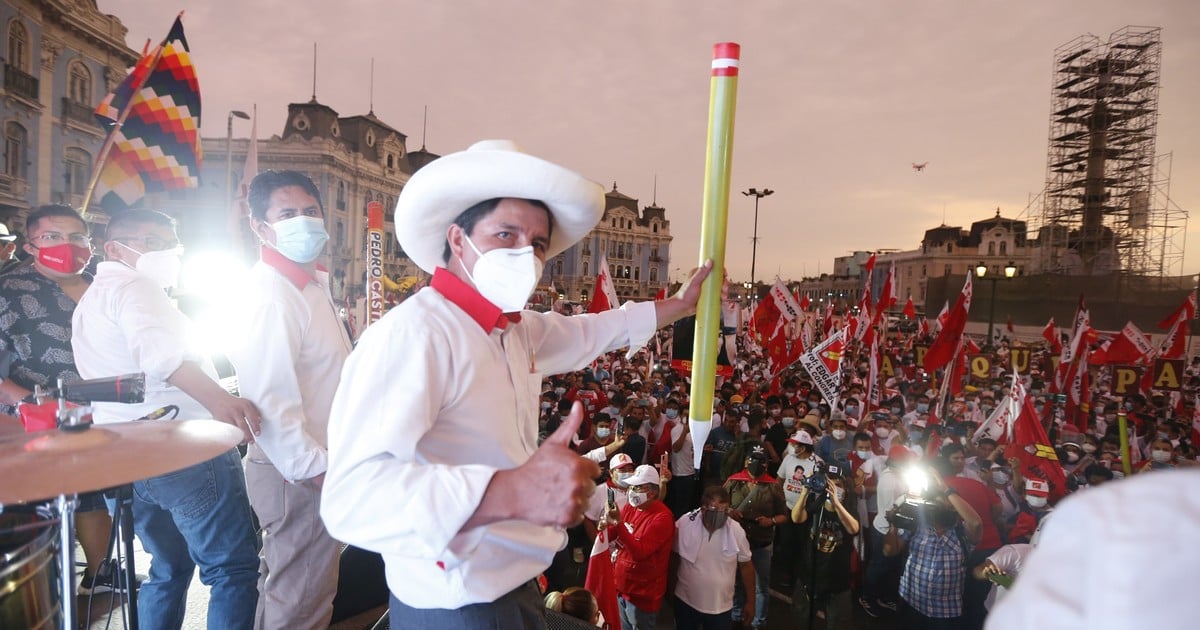 Pedro Castillo, the ultra-left candidate for the presidency of Peru, currently has an eleven point advantage over the right-wing Keiko Fujimori, his rival in the second round on June 6, according to a poll released this Sunday.

The survey, carried out by the Ipsos company and published by the local network América Televisión, indicated that 42% of citizens said they would vote for Castillo and 31% for Fujimori.

In addition, 16% assured that they would leave their suffrage blank or annul it, while a 11% did not specify their preference.

In a close and atomized first round, with five candidates locked in less than ten points, the teacher and union leader won with 19.06% of the votes, against 13.36% of the daughter of the former Peruvian president.

Castillo grows strong in the interior of the country

Always with his straw hat and a pencil, the native of Chota, a northern Andean province, in the Cajamarca region, managed to convince many in the rural interior with his socialist and unorthodox proposals.

support is reversed in Lima

The survey details the great support that Castillo, the party’s candidate, receives Free Peru, in the interior of the country, where it has 47% support in urban areas and 60% in rural areas.

The Ipsos survey, which was conducted between April 15 and 16 of 1,204 people and has a 2.8% margin of errorHe added that 67% are “informed enough to decide” and 4% do not specify their position.

Commenting on the result of the survey, the director of Ipsos, Alfredo Torres, affirmed that although there are seven weeks to go before the second electoral round, “it is true that it is an important gap, because on other occasions there has not been so much difference “.

“Keiko Fujimori has it uphill if he wants to turn the game around, he started with the score against, “Torres said before reiterating that” we must be cautious, “but it must be recognized” that the gap is wide. “

“All this it could change in the course of other weeks, “he said after commenting that the poll was conducted before writer Mario Vargas Llosa asked his compatriots to vote for Fujimori on Saturday, considering it” the lesser evil “in the face of Castillo’s ultra-left tendency.

The writer’s position, Torres added, “could have some influence in some sector of the electorate, “although the country’s upper and middle classes” are more towards Keiko Fujimori “and the economically lower ones opt for Castillo.

“Castillo’s advance is no longer limited to the Andean areas, but also to other regions, such as the north of the country, that it’s a novelty“, he said.

Torres also said that a third of the public “could still favor one or the other” candidate and that this poll “it’s a first photograph of how this campaign begins for the second round “after the general elections of last April 11, which determined the ballot between Castillo and Fujimori.

Keiko Fujimori will have to overcome an important gap to become president. Photo The Trade

After learning about the survey, Castillo released a video message in which thanked “deeply for the support” of the population and offered that “with this same spirit, with this same loyalty to the people” will be conducted in the second round.

“We do not agree to run a campaign with attacks, with low blows, for our part they will not have it; We believe it is important that in this scenario we have to work and politically propose the great proposals of the country“, Held.

The candidate added that if he reaches the head of state, his government will be “respectful” of the Constitution. current, what raises change, “until the people decide in a referendum, until this will emanates from the people.”

“No more poor in a rich country”, he concluded.

Analysts list the skills required for a successful career

Comment Finland needs a functioning government: The pandemic does not wait but requires even bigger decisions