Pears poached in saffron and cardamom 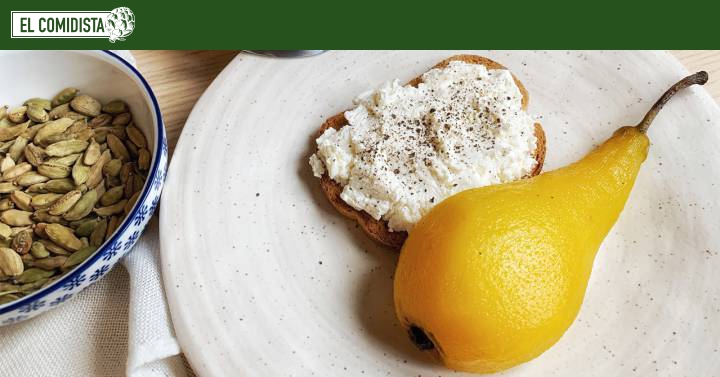 Pears in red wine are typical of La Rioja, although they have long been spread throughout the Spanish gastronomic territory as part of the undeniable Castilian culinary tradition. The old returns, like everything that is cyclical, revised and transformed; sometimes as a joyful vindication of what should never have left and others with a petulant and modern air that the only thing that achieves is to get the colors out of us, for that attempt to mark distance and think that everything can be improved.

We are going to prepare a version that uses the same technique that is used for the aforementioned recipe, but with different flavors and alcohol-free. We will poach the pears very slowly in a spicy syrup with citrus and cardamom and the powerful floral aroma of saffron, which will bathe the pears with an attractive golden color.

The result is pears that are perfect for dessert, but which, thanks to the spices, can be perfectly combined in a savory dish, such as toast with cottage cheese and black pepper, an arugula and endive salad with kalamata olives and fennel or even a pork tenderloin or a duck breast with mashed potato or sweet potato.

The one to watch that the pears do not overcook and end up blandurrias.

If you make this recipe, share the result on your social networks with the hashtag #ComidistaRecipes. And if it goes wrong, complain to the Chef’s Ombudsman by sending an email to [email protected]