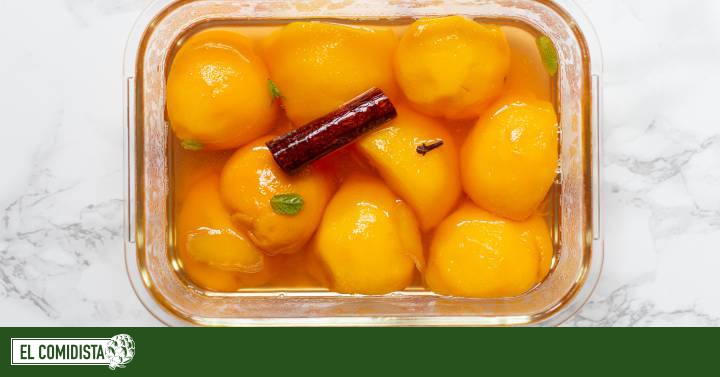 Something happens with all the meals that have “al vino” in their name that make us think of slightly old-fashioned dishes, rococo style and of French origin. However, cooking with wine, using it as a cooking liquid or as a flavoring, is very interesting. Fruits, meat and fish, among others, combine harmoniously with this drink.

Pears in wine are well known and Ana Vega ‘Biscayenne’ claimed their adoption back in 2016. Peaches also combine perfectly with wine, and in my opinion, in this recipe, they go better with white than with red. I have not invented gunpowder, this fruit has been mixed with sparkling white wine since the middle of the last century in the cocktail Bellini.

The preparation of this dessert is very similar to that of pears with wine: the fruit is cooked in the same way with different flavorings and later the liquid is reduced until obtaining a syrup. It is recommended – not mandatory – to use a fruity white wine before a dry or too acid one, and bear in mind that we should not cook with one that we would not drink: all its aromas will be impregnated in the peaches.

If you make this recipe, share the result on your social networks with the hashtag #RecetasComidista. And if it goes wrong, complain to the Chef’s Ombudsman by sending an email to defensoracomidista@gmail.com