Paralyzed mice are bouncing around thanks to a new treatment. 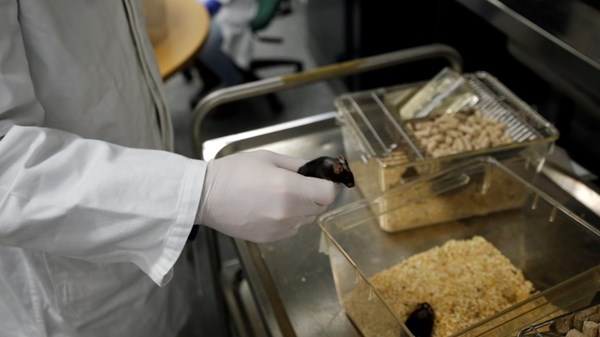 German researchers were able to help mice paralyzed from spinal cord injuries to walk again.
Researchers were able to achieve this scientific breakthrough by re-establishing a neural link, which had hitherto been considered irreparable in mammals, using a protein injected into the brain.
Spinal cord injuries, often caused by sports or traffic accidents, leave them in a state of paralysis because not all nerve fibers that carry information between muscles and the brain are able to grow again.
But researchers at Ruhr University in Bochum were able to stimulate the paralyzed mice’s neurons to push them to regenerate, using a protein.

“What distinguishes our study is that the protein is not only used to stimulate those neurons to produce it on their own, but it is also transported further (via the brain),” said Detmar Fischer, head of the research team, in an interview.
“In this way, and with a relatively simple intervention, we stimulate a large number of nerves to regenerate, and this in the end is the reason why mice are able to walk again.”
The paralyzed mice, who received the treatment, began walking after two to three weeks, Fisher explained.

The treatment involves injecting material carrying genetic information into the brain to produce the protein called “hyperinterleukin-6”, according to information published on the university’s website.
The team is looking at whether they can improve this approach.
“We also have to see if our (treatment) methods work for larger mammals. We will think, for example, of pigs or dogs or primates,” Fisher said.
“If I succeed in treating them (the larger mammals), then we have to make sure that the treatment is safe for humans as well. But that will definitely take many, many years,” he added. A fairy tale for Karatsev. How a Russian tennis player rewrote the history of the tournament