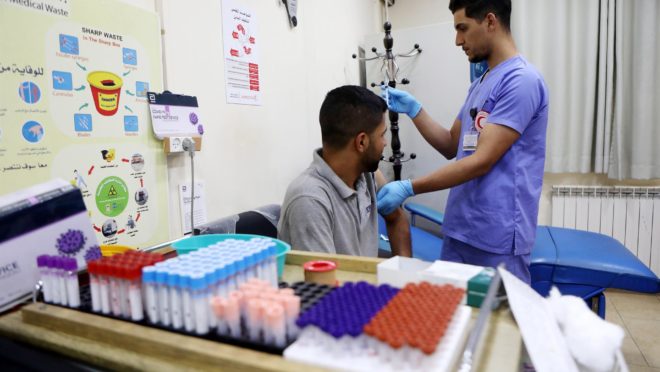 The Palestinian National Authority (ANP) announced this Friday (18th) the cancellation of the agreement signed earlier with Israel, through which it would receive loaned more than one million doses of Pfizer’s vaccine against Covid-19, with the argument of that such doses “do not meet specifications” because they are close to the expiration date.

“Specialized teams from the Ministry of Health found that the vaccines received from Israel today do not meet specifications, which is why the government decided to return them,” Palestinian Health Minister Mai al Kaila explained in a statement. Israel had shipped the first 100,000 doses on Friday.

Palestinian Prime Minister Mohamed Shtayyeh has ordered Kaila to inform Israel that the deal is canceled and ask Pfizer to hand over the next outstanding batch to the ANP, not the Israeli government. He also said that Palestinians would not accept “close to winning” vaccines from Israel.

There was no immediate official reaction from Israel, but an Israeli Health Ministry official said in a radio interview: “We don’t know what they want, the vaccines are good,” he said, according to local media reports.

This morning, the office of Israeli Prime Minister Naftali Bennett announced that Israel would in the next few days loan the ANP from 1 million to 1.4 million doses from Pfizer that are close to expiring, in order to speed up the slow campaign. of vaccination in the Palestinian territories.

In exchange, the ANP has promised to return to Israel the same amount of vaccines from Pfizer that it expects to receive between September and October 2021, according to an agreement signed this Friday by the parties in the first week of the new government led by Bennett.

Israeli media say the vaccines shipped to the Palestinians this Friday have an expiration date until the end of June or July, and that Israel delivered these first so they wouldn’t be wasted. The rest of the vaccines have a longer expiry date of a few months.

Israel is carrying out one of the fastest vaccination campaigns in the world, which has allowed it to lift restrictions that were in place to contain Covid-19, including the mandatory use of masks indoors this week.

However, the immunization campaign in the West Bank and Gaza is advancing slowly and with many obstacles, putting both the Palestinian and Israeli populations at risk. Although the security barrier separates most of the West Bank from Israel, and there is an almost hermetic fence between Israel and Gaza, the entire region is considered an epidemiological unit.

According to the ANP’s Ministry of Health, until this week, 436,275 people had received at least one dose, and about 260,000 received both doses of the vaccine against the coronavirus.

These numbers include the more than 100,000 Palestinian workers that Israel has vaccinated since March, as they come into regular contact with Israelis at their workplaces. The figure also includes about 52,000 Palestinians in the Gaza Strip who were vaccinated.