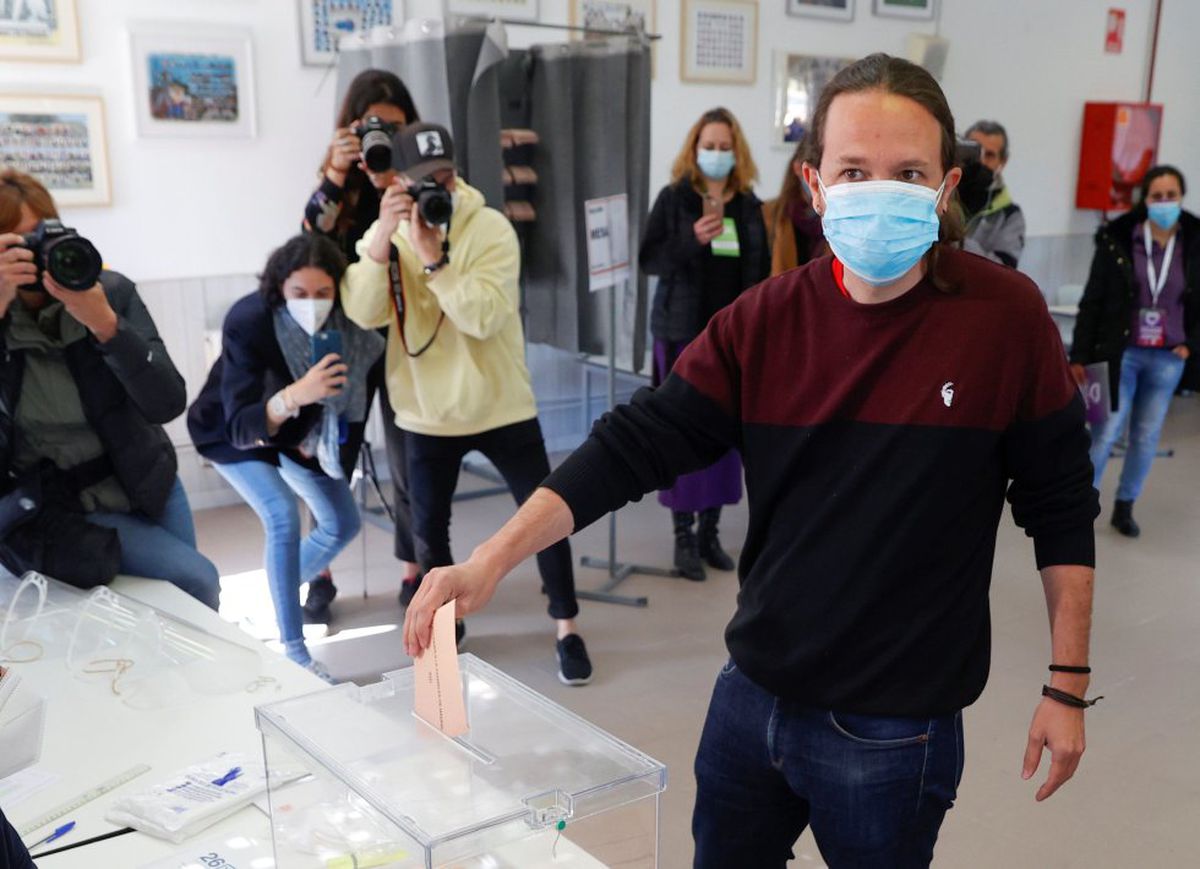 Pablo Iglesias is leaving. The United We Can candidate announced on Tuesday night that he is leaving all institutional positions in politics. The general secretary of the formation, who with his entry into the electoral battle for Madrid was throwing all the responsibility for the result on his shoulders, has not managed to be the revulsive that he intended when he decided to leave the vice-presidency of the Government. After a tense campaign, marked by death threats against him, UP data in the region, 10 seats and 7.23% support, have precipitated an exit that Iglesias had been preparing for some time.

“I drop all my charges. I leave politics understood as party and institutional politics ”, stated the UP candidate in his appearance. “I will continue to be committed to my country, but I will not be a stopper for the renewal of leadership that has to take place in our political force,” he said surrounded by the party’s staff, including ministers Irene Montero and Ione Belarra. Iglesias has assured that he has become a “scapegoat” that mobilizes “the darkest and most anti-democracy affections” and has decided to take a step back, aware that he does not contribute to “add” so that the United We Can project can “Consolidate its institutional weight”.

“The impressive electoral success of the Trumpist right that Ayuso represents is a tragedy for health, education and public services,” said Iglesias. “I predict that these results will exacerbate the territorial problems in Spain. Madrid has never been so different ”, pointed out the still leader of UP, who has warned that the“ institutional disloyalty of the Community of Madrid towards the Government of Spain and other institutions is going to intensify ”.

“We have failed,” Iglesias said to refer to the results of the left in these elections. “We have been far from adding a sufficient majority to build a decent government,” he said, although he congratulated the More Madrid candidate, Mónica García, who has surpassed the PSOE in number of votes.

In March, Iglesias decided to leave the coalition executive with the aim of saving the formation in Madrid, “stopping fascism” and preventing the far-right from entering democracy for the first time to form part of a government in Spain. The polls prior to the announcement of his candidacy placed United Podemos below the 5% vote necessary to have representation in the regional parliament and with him on the list that danger disappeared.

However, the training slightly improves the results obtained in the 2019 elections (seven seats and 5.6% of the votes), but very far from the 27 deputies of 2015 and with a very different poster. Two years ago, the candidate for the presidency was an unknown Isabel Serra, who had to take up the challenge after Íñigo Errejón’s scare to found Más Madrid together with the mayor Manuela Carmena. That movement highlighted the umpteenth struggle within the left and relegated Podemos to the last position in the Assembly. Now, despite having Iglesias at the helm, Más Madrid takes more than double more seats than UP with a candidate until recently unknown to the majority, Mónica García, but who has managed to grow in the campaign and overshadow the former vice president, who He offered a joint nomination weeks ago that she rejected.

Since his resignation in the Congress of Deputies and the Council of Ministers, which decided, aware of the wear and tear that his figure has suffered in recent years, Iglesias had opened the door to new leaderships. The first has already been consummated within the coalition government by raising the Minister of Labor, Yolanda Díaz, to the third vice-presidency and pointing her out as the future head of the list in some generals. The second, at the head of the party’s general secretariat, would have to wait another two years, the date of the next congress, and in any case it would be a woman in charge of taking the reins of the formation, as Iglesias himself had stated throughout the bell. With the announcement on Tuesday night, the deadlines jump through the air and as of this Wednesday a stage opens to decide the future management model, a complex issue after the founder has built a closed Podemos around his leadership. Until now, he was the only one of the founders who resisted at the front. Carolina Bescansa, Luis Alegre and Íñigo Errejón were separated step by step due to discrepancies with Iglesias.

The step back of the leader of the formation also confirms the failure in the strategy of the last weeks. United We can designed a campaign for the “working majority”, focused on the cities and districts most punished in the Community, which sought to increase participation in these traditionally abstentionist areas, but the scrutiny shows that despite having achieved their objective, the fiefdoms of the right mobilized much more. “The data is very high, but we have not achieved the objective we were looking for,” Iglesias acknowledged. “On the contrary, the victory of the right wing and the institutional presence of the extreme right have been consolidated,” he added.

Unidos Podemos has not been able to make electoral gains within the Government either, another of the lines of argument used by both Iglesias and the UP ministers. “We are a guarantee that what is signed with us is fulfilled,” repeated the former vice president in each of his public speeches. The ERTEs, the minimum vital income, the paralysis of supply cuts or the housing law that is still being negotiated to limit the price of rents.

What Iglesias did know how to do was mark the campaign speech. He succeeded first with the unexpected announcement of his candidacy, and later, when he dragged the rest of the candidates on the left to the dilemma between democracy and fascism. In these two weeks, the head of the list has received letters with death threats. One of them was also addressed to members of his family. The former vice president has been enduring daily harassment by a group of ultras at the door of his house for more than a year and even last summer he was forced to suspend a vacation in Asturias after a similar episode in the residence they had chosen for his rest. . The complicated personal situation, having already transferred the electoral leadership to Díaz and the poor results in Madrid, the community that gave rise to Podemos, have also accelerated the transition to the head of the party.

In his farewell speech, the former vice president highlighted the need to renew the party “without any figure that could contribute to overshadowing” the new leadership. “I believe that Isa Serra is now accompanied by an enormously powerful team to oppose the Assembly and aspire to build an alternative to the right,” added Iglesias, for whom the training must now fulfill the “promise of feminization of the political proposal ”.

The still secretary general of Podemos has reviewed the achievements of training in his seven years of life. “I am enormously proud to have led a political project that changed the history of our country, which ended bipartisanship,” said Iglesias, who has repeated that when “one is no longer useful, one has to know how to withdraw.” Iglesias ended his speech by reciting some verses by the singer-songwriter Silvio Rodríguez: “I don’t know what destiny is. Walking I was what I was ”. “Goodbye,” Iglesias said goodbye amid hugs and applause from the rest of the candidates and members of the party leadership.

Talent for the cloud