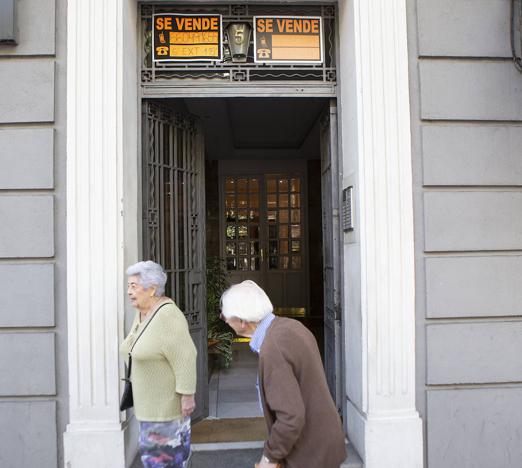 An elderly couple in a home for sale. / RC

The bare ownership, which allows the seller of a house to continue residing in it all his life, makes its way among the real estate options

Angelines had no children or nephews, so she was devoted to Whiskey. When this beautiful Schnauder breed dog fell ill, its owner had to face expensive veterinary treatment and asked for several loans from the bank. “I was drowned,” she remembers. To get out of the problem, he found a solution: sell his flat in bare ownership. The house, in the La Estrella neighborhood of Madrid, near the Retiro, was valued at 320,000 euros and the buyers paid him 160,000. The dog died, but Angelines now lives in peace. “With part of the money I paid the loan, another part I saved and the rest I am enjoying to live my life. I fulfilled the dream of going to the New Year’s concert in Vienna, ”says this smiling 75-year-old woman, who used a product with a long tradition that is being offered by more and more real estate companies in Spain, although she still has objections.

«The bare ownership consists of assigning the ownership of the home while preserving its use and enjoyment, the usufruct. That is, the seller continues to live in the home until he or she dies, but has received the money from the buyer. This is possible because Spanish legislation allows to split the possession of the enjoyment of a real estate asset “, explains Pedro Serrano, professor of Finance at the Carlos III University. Together with Juan Ángel Lafuente, Professor of Finance at the Jaume I University of Castellón, Serrano has studied in depth this real estate product, which he considers “appropriate to supplement income during retirement” and which offers benefits both for the seller, who receives the money immediately, as for the buyer, who acquires a home at a reduced price because he will not be able to dispose of it until the tenant dies.

The profile of the seller in bare ownership responds to that of an elderly person without a close family and who does not have great savings because they have invested most of their money in a home that they own, the so-called “real estate savings”. «Before, the normal thing was to sell or rent that house and go to the one in town, if you had one. But that meant leaving home. Now other options are spreading, such as a reverse mortgage, real estate annuity or bare ownership. With bare ownership, the seller benefits from the split that Spanish law makes between two concepts, ownership and use and enjoyment: it keeps the right of use and enjoyment and cedes ownership “, adds Serrano, who believes that This product “is a way for retirees to maintain their standard of living and exploit their leisure and free time, when they are living longer and with higher quality, and in a context of doubts about the future of pensions.”

“Sold out! Sold out! Do you want to sell your house and continue living in it? I invite you to have a snack and I will tell you how ». From his trips to the United States, the Basque businessman Eduardo Molet brought guerrilla marketing and catchy slogans and from Italy and France, the idea of ​​bare property. Now, his real estate company, Molet Mayores, has specialized in this type of sales, which has more and more interested parties, but which at the same time faces the traditional mentality of the Spanish. «We are very attached to our home, that is something that comes from our grandparents, who all lived in the same house. And furthermore, some people reject naked property because they don’t want to even talk about death. But many prejudices are being overcome “, says Molet. The bare property is presented as an increasingly attractive option, says this real estate company, which has a portfolio of more than 100 homes for this sale and which adds approximately 20 to its catalog every month.

However, on real estate portals, there is still a very small offer of bare property. “It is not widely established in Spain”, acknowledges Ferran Font, Director of Studies and spokesperson for piso.com. “We are a country of owners and the security of having a flat is highly valued, something that is very present even in popular culture, with phrases such as’ not having anywhere to fall dead,” he continues. In addition, this expert recalls that the real estate bubble or scams such as the Philatelic Forum “have sown doubts about any financial or real estate product that can be considered novel.” According to their estimates, some 1,500 homes were sold in bare ownership in Spain in 2020, just 3.5% of the total home sales that year. However, Font believes that bare ownership brings advantages both for the elderly, “who otherwise have a difficult time getting income”, and for buyers, “who benefit from long-term profitability.”

The bare property is also interesting for parents who want to “advance” the inheritance to their children, says María Teresa Barea, dean of the Notarial College of Andalusia. In his opinion, “it is an option with all the economic sense for the owners, who think: ‘For someone far away to inherit the apartment, I spend its value in life'” and as a notary, he points out that “attention is paid Special to the party that is considered the weakest, the older person who sells, to whom the operation is explained in detail. Even so, Barea still sees few sales in bare property because “the Latino mentality continues to be to make property, keep property and transfer property.”

Buyers in bare property are slow to enjoy the home, but in return, they have acquired it below the market price. They can get a discount of between 15 and 50%, always depending on the age of the seller (the older, the less discount). In Madrid, the city with the most apartments available in bare ownership, a house valued at 500,000 euros can be sold for 420,000, if the owner is over 90 years old, or for 250,000, if he is in the 70s. The buyer of these homes is, usually, “an investor looking for profitability in the medium or long term”, underlines Ferran Font, from piso.com. Regarding housing expenses, unless otherwise agreed, the seller will take care of the smallest and the buyer, the largest spills. The light is nourished with more solar and wind, with the receding coal