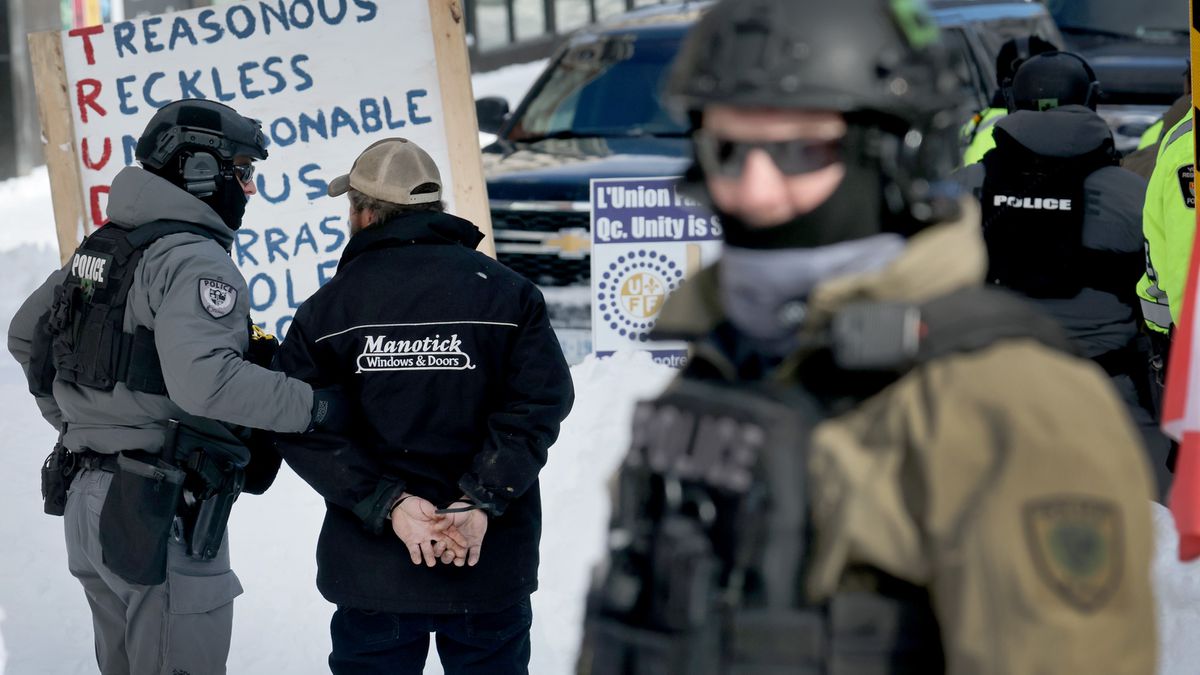 A major police operation has been launched this Friday to unblock the streets of Ottawa, a city that for three weeks has been taken over by trucks and occupied by protesters opposed to the health measures against the pandemic imposed by the Canadian government. As reported by the police late on Friday, there were 70 detainees and 21 vehicles had been removed in a city that recorded frigid temperatures, with a wind chill of 20 degrees below zero.

One of those arrested is Pat King, one of the most recognized figures of the protesters. Chris Barber and Tamara Lich, two organizers of the so-called freedom caravan, had already been arrested on Thursday. The three leaders face charges of incitement to commit damage, obstruction of justice and disobeying a court order.

Canadian police already completely evicted last weekend one of the busiest border crossings linking Canada with the US, which was blocked by truckers protesting against mandatory vaccination. Despite the police measures, Ottawa was still a territory taken over by the protests on Friday. After dozens of buses left the city on Wednesday and Thursday, the protesters expressed through social networks that they did not intend to leave the capital. Police reminded them that under federal and provincial law, those who did not immediately leave the scene and remove their vehicles from the streets would face “heavy penalties”.

See also  Nord Stream 2: Is there a traffic light dispute? “SPD, Austria and Putin” against the rest of the world

At the beginning of this week, the situation became untenable. Canada’s Prime Minister Justin Trudeau was invoking emergency powers not used since 1970 to deal with the protests. “Lockdowns are damaging our economy and endangering public safety,” the prime minister said. “We cannot allow these dangerous and illegal activities to continue.”

Chrystia Freeland, finance minister and deputy prime minister, defended this Friday the Emergency Law to evict downtown Ottawa, stressing that the country’s economy and democracy are under threat. “A liberal democracy must be prepared to defend itself,” she said.

This Thursday, Trudeau, on whom a multitude of criticisms are falling for invoking extraordinary powers, assured in a parliamentary session that “illegal blockades and occupations are not peaceful protests.” “They are a threat to jobs and communities, and they cannot continue,” stressed the leader of the Liberal Party of Canada. This Friday, the House of Commons (which together with the Senate makes up the Canadian Parliament) suspended its session precisely to avoid possible incidents while the police operation was taking place.

The forces of order had given many warnings before their intervention on Friday. On Wednesday, the police warned that the truck blockade of anti-vaccine protesters in the center of the capital was “illegal” and warned that they would proceed to arrest those protesting if they did not give up their efforts. In a message through their Twitter account, the Ottawa police denounced that the protesters had placed children between the police operations and the place of the illegal demonstration. “The children will be taken to a safe place,” they assured and recalled that it was “illegal” to use minors in this way.

The so-called convoy of freedom has caused millions in losses in both Canada and the United States, especially affecting the automotive industry. The protests began on January 29, when hundreds of truckers drove to Ottawa to show their opposition to mandatory vaccination. Other provincial capitals (such as Quebec, Toronto or Winnipeg) joined later with local demonstrations. The capital declared a state of emergency on February 6.

In the middle of the week, the chief of the Ottawa police, Peter Sloly, announced his resignation after several days of criticism for the inability of the body to control the blockade of more than 400 trucks and hundreds of people against the sanitary measures against the covid-19 pandemic.