Orient Express, the train that became a legend on rails 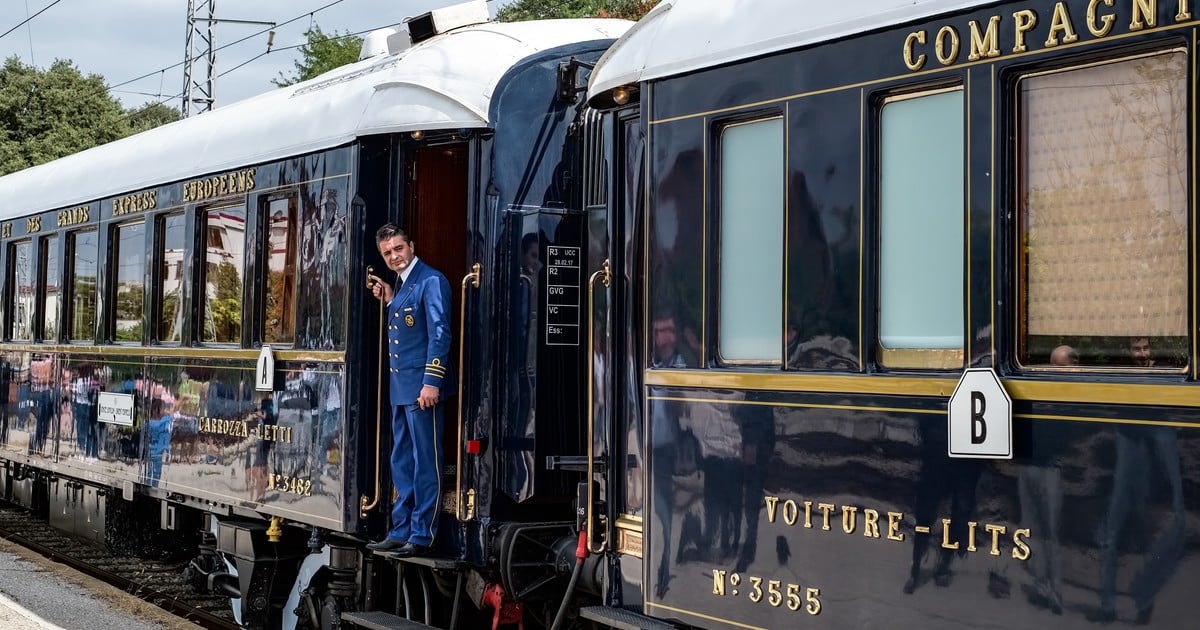 138 years ago, today Gare de l’Est, the Paris train station, there was enthusiasm, nerves and above all style and opulence. On June 5, 1883 at 7:30 p.m. the first departure of the Orient Express, the most luxurious transport that had arrived in Europe.

“The first exit of the Express d’Orient, also known as Orient Express, was since then called Gare de Strasbourg. The passengers were all men who had been advised to carry a weapon as a precautionary measure ”, they affirm from the Orient Express company, which has the Accor hotel group as the largest shareholder.

The idea of ​​linking western European capitals with more eastern cities, it changed the notion of long-distance travel.

“After that first service, the official inauguration took place on October 4 of the same year. A crowd made up of journalists, artists and personalities from the political and railway world flocked to the platforms to witness the departure of the maiden voyage, to which 24 passengers were invited, including two women, ”they comment in the company.

Its luxurious decoration, incomparable comforts for the time, the renowned passengers and the mystery that the popular novel Murder on the Orient Express by Agatha Christie gave it, made it one of the most Famous of the world.

The services offered by the train were totally new for the time.Photo Orient Express Heritage.

As you can read on the Orient Express official page, it all started in 1867. After a personal crisis, the young Belgian engineer Georges nagelmackers he fled to the United States to seek refuge. There, he discovered the first sleeping cars on the railroads, created by George Pullman.

When he returned to the European continent inspired by that comfortable way of moving, something that did not happen on the other side of the Atlantic, he decided to launch trains with all kinds of services. His idea was of Vanguard.

The Compagnie Internationale des Wagons-Lits (CIWL) produced sleeper cars and the first dining cars. In addition, the company had travel agencies and workshops throughout Europe.

“Comfort on the rail” can be read at the top of this advertisement. Photo Orient Express Heritage.

The decor was dazzling, typical of the Belle epoque. Velvet curtains, mahogany furniture, silver cutlery, bronze taps. Each car measured 17.5 meters. They had steam heating and were lit by gas light.

“The Orient Express itself brings the allure of mystery, glamor and opulence. His reputation has endured since his birth with his stories passed down from generation to generation. His legend lives on ”, they explain in the company.

The gastronomy he was a great protagonist of life on board. Every night, the travelers dressed in their best suits and headed to the dining car. The service included fine wines served with elaborate meals.

Until the outbreak of the First World War, which forced the suspension of almost all trips, the route was made three times a week. The ticket cost, at today’s values, the equivalent of 1,750 euros per person, which represented almost a third of what a French worker earned per year.

The passengers they were aristocrats, politicians and celebrities who were the protagonists of some unusual stories.

Some media claim that the Bulgarian monarch, Boris III, insisted on driving the train through his country. He did it at excessive speeds. The Russian Tsar Nicolas II requested in advance that for his trip a specific decoration be built on the wagons that he and his entourage would use for their visit to France.

French President Paul Deschanel fell from one of the cars allegedly under the action of a tranquilizer. Hours later, in his pajamas, he appeared at the home of a French level crossing guard asking where he was.

This is what the first carriages of the train looked like. Photo Orient Express Heritage.

“It is rumored that icons such as Josephine Baker (French artist and human rights activist), Mata Hari (Dutch dancer and spy during World War I) and Lawrence of Arabia (British military and writer) traveled on board,” they say from the company although they claim they have no way of verifying these sayings.

Nagelmackers knew how to listen to the needs of the passengers. In 1894 he opened the first Hotels of the company. The objective was to achieve a completely luxurious and modern experience since in some destinations where the train passed, the accommodation was not up to the sumptuousness of the transport.

Under the firm Compagnie Internationale des Grands Hôtels he inaugurated buildings in Paris, Beijing, Istanbul, Cairo, all with a palatial air.

The Orient Express carried in its wagons from politicians to stars of the moment. Photo Belmond.

In 1919, a year after the end of the First War, the itineraries returned to normal with an important news: a new route to the south, through the Simplon Tunnel, the longest in the world at that time. It connected Switzerland with Italy under the Alps and drastically reduced the travel time between Paris and Venice.

The route, which had stops in Milan and the Italian city famous for its canals, was renamed the Venice-Simplon Orient Express.

A third route was inaugurated that crossed Europe. It left from Paris and passed through Zurich, Innsbruck and Budapest, with some extensions that continued to Bucharest and Athens.

London was connected to the Simplon route. The travelers took a train to Dover, where they boarded a ferry to Calais. From there they continued by train to Paris, and hooked up at the Gare de l’Est.

The luxury of the Orient Express inspired authors and filmmakers. Photo Belmond.

Then his popularity was already consolidated. But even so, in 1934 with the release of the book Murder on the Orient Express by Agatha Christie, the train transcended as legend.

The author, who traveled for the first time in 1928, was inspired by an incident that occurred in 1929. The wagons were caught in a snowstorm in Çerkezköy, Turkey, where they remained for six days.

Two years later, Christie had a similar experience firsthand. The train was stopped due to rains and floods that ruined part of the track.

During World War II, European borders were closed and service had to be suspended. Once the conflict ended, the passage between Yugoslavia and Greece did not open until 1951, and between 1952 and 1953 the border between Bulgaria and Turkey was closed, which prevented the Orient Express from reaching Istanbul.

Despite that, the train did not lose its charm. Ian Fleming’s novel From Russia with Love, released in 1957, put the Orient Express at the center. The story hit theaters in 1963 and starred Sean Connery as James bond, who was added to the list of famous passengers.

However, the worldwide popularity that Hollywood gave him was not enough to prevent the advances of the time. The wagons could not compete with the speed of the airplanes. On May 20, 1977, the last trip direct between Paris and Istanbul.

Can you ride the Orient Express today?

The Compagnie Internationale des Wagons-Lits was forced to sell some of the cars. James B. Sherwood, the founder of Belmond, a tourism company, bought two of these at a Monte Carlo auction in 1977.

Then, he looked more in private gardens, museums, and railway sheds. After years of careful restoration, the iconic blue cars were back on the rails in 1982, linking London and Venice.

Normally the routes run from March to November, but due to the pandemic the trains are stopped. The itineraries will be resumed from June 21.

This is what the bar of the Orient Express of the Belmond company looks like. Photo Belmond.

Once per year Belmond organize the original tour from Paris to Istanbul. “The 20th of August. Includes three nights on board the Venice Simplon-Orient-Express, overnight stays in Budapest and Bucharest. There are stops in Paris, Budapest, Bucharest, Bulgaria and Istanbul ”, they affirmed from the British company.

The itinerary lasts 5 days and costs 15,000 pounds ($ 21,165.90) ​​per adult in a double cabin. The price includes a butler, continental breakfasts, four-course dinners each night, and three-course lunches.

As you can read on the company page, the elegance of the passengers is still an important factor. For dinner, men should wear a suit and tie and women should wear elegant attire. During the day, the dress code is informal although jeans are not accepted at any time.

During the afternoon, the butler removes the beds from the suite to create a living room. Photo Belmond.

On the other hand, the Orient Express company owns seven cars from 1920. “The wagons are some of the rarest of the golden age of travel, all restored and now classified as historical monuments,” they confirmed.

Orient Express currently offers tailor-made trips and private. From the choice of the destination to the design of the program, it is the tourist’s decision.

“Passengers want to live this experience because of his legacy as a pioneer in technical innovations, luxury and excellence. It is a cultural icon in itself, it brings together the art of traveling and the art of living ”.

The company is focused on opening hotels around the world that will represent the luxury of the 1920s.

After shuffling Bangkok, Thailand, as the first destination to open a train-inspired lodging and scrapping the project, Rome was chosen. The selected place is the current Hotel de la Minerva built in 1620 and located in the Pantheon district of Rome in Piazza de la Minerva. It is expected to open in late 2023.

Businessmen and tourists are resisting the spirit of the Orient Express being forgotten. The wagons, which have been on the rails for more than 100 years, continue to captivate travelers who love good experiences.