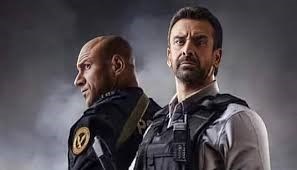 Shaaban Bilal (Cairo) The Egyptian series “Choice-2”, which is shown during the holy month of Ramadan, documented the truth about the details of the terrorist Brotherhood’s use of weapons in dispersing the Rab’a sit-in in Egypt, the presence of snipers, and the escape of Brotherhood leaders after setting the scene up and provoking the sit-in.

The real scenes included in the series showed the use of automatic weapons, RPGs and Molotov cocktails by a number of protesters in Rab’a Square in Nasr City, along with the extensive use of stick, bricks and white weapons.

The series showed that Brotherhood members planned to disperse security personnel during the dispersal by launching simultaneous attacks in several Egyptian governorates on churches and mosques, including the Kerdasa section, Fayoum, Minya, Beni Suef and other strategic and security sites.

One of the leaders of the terrorist Brotherhood said in a representative scene in the series: “All the circles of blood have covered all that remains in every house in Egypt.” One of the scenes showed that a woman who broke into the Kerdasa department and watered a member of the section with “fire water” after she was asked to drink water, in addition to representing her with the corpses of the officers. The series featured the battle of the Manifa Building during the dispersal of the Rabaa al-Adawiya sit-in, which is the building that was under construction and was settled by armed terrorist elements, and was occupied by snipers who began firing at the security forces in charge of dispersing the sit-in.

The series also showed Brotherhood leaders’ confessions of the presence of weapons in Rabaa al-Adawiya Square, including statements by Ahmed al-Mughayir, a young leader of the Muslim Brotherhood, to the East Brotherhood Channel, in which he said: The Rabaa sit-in contained weapons capable of repelling the army and police forces. After the presentation of the fifth episode of the series “The Choice 2”, which deals with the events of the Rab’a sit-in dispersal, the hashtag “The Choice Break Rab’a” most discussed in Egypt was published on the short tweet site Twitter. And the series “Choice 2 – The Shadow Men” starring the artist Karim Abdel Aziz and the artist Ahmed Makki, in participation with a large number of artists, most notably Iyad Nassar, Hadi Al-Jiyar, Muhammad Alaa, Islam Jamal, Salwa Othman, Bushra, Ahmed Saeed Abdul-Ghani, The work is written by Hani Sarhan, and directed by Peter Mimi.

Cancel Culture: Do we have to part with favorite books?