Operation Doolittle: how was the escape of the American pilots after the revenge for Pearl Harbor 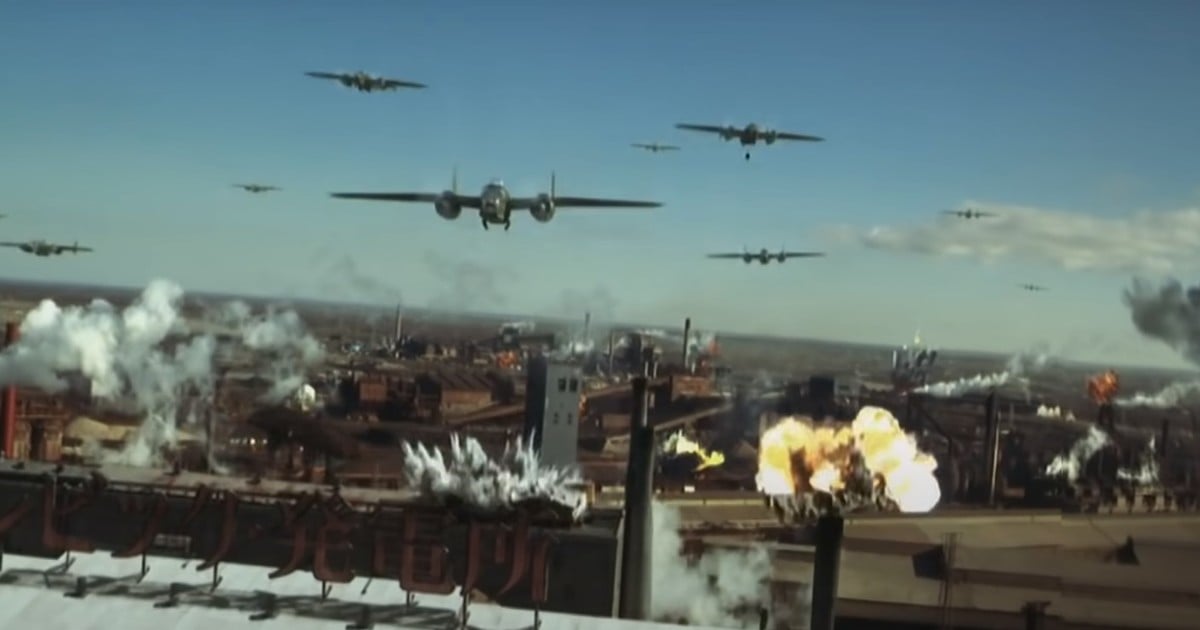 “Isoroku Yamamoto, the Japanese commander who devised the attack on Pearl Harbor, I had spent a lot of time living and studying in the United States, so I knew very well how they thought. He knew two things. The first, that the Americans adored their warships. So if they took them down in that first attack they would make them feel like they took away their most powerful weapon. The second thing is that the Americans had good aircraft carriers and great planes and pilots. That was one of the key targets and the worst possible outcome was to destroy the warships and leave the aircraft carriers intact. That was exactly what happened. “

Timothy orr, a history professor at Old Dominion University, defined in the documentary “World War II Events” what was going through the head of the only Japanese who was worried after what had been the successful surprise attack against the American naval base, that morning of Sunday, December 7, 1941.

For different tasks, the US carriers Hornet, Enterprise, Yorktown, and Lexington were a long way from Pearl Harbor when the bombs and torpedoes fell. So after the sinking of eight battleships by Japanese forces, they were now practically the only thing the navy had of the brand new Commander-in-Chief Chester W. Nimitz as if to respond to the Asian enemy.

The other factor that the Japanese high command had not taken into account when planning their bombing was the reaction it would have on the American people. The society responded immediately. National pride had been severely damaged and there was fury and thirst for revenge among the citizens, who were rushing to enlist and waiting for an urgent rematch.

Just two days after the bloody attack, which took the lives of more than 2,000 people, the military forces began to organize what would later become known as Operation Doolittle. Revenge, which would mark the final landing of the United States in the war.

After the bombing of Pearl Harbor, Operation Doolittle was organized. (REUTERS)

As Japan advanced on the rest of the Pacific islands and extended further into Chinese territory, President Franklin Roosevelt was meeting with the Joint Chiefs of Staff to demand a bombing as soon as possible. It was imperative to deliver a coup to raise the morale of the people and mark the enemy that his victory would not be as simple as he imagined.

“An attack on the Japanese homeland would cause confusion in the minds of the Japanese and it would cast doubt on the trustworthiness of their leaders … Americans urgently needed a moral boost, “he said in his biography. James Doolittle, the one in charge of carrying out that plan, which had been diagrammed by the captain of the navy Francis Low.

The Arizona burning after the Japanese attack on Pearl Harbor

The idea came up in January 1942, amid a wave of criticism of the president from governors from Virginia, Georgia and South Carolina, questioning the null capacity to react to the bombing of Pearl Harbor. There was no time for doubts, the aircraft carriers Lexington and Hornet, would move the B-25 bombers to the Japanese coast to attack Tokyo, Yokosuka and Nagoya.

The plan was improvised and extremely risky. The B-25 aircraft had entered into service the previous year and they had not yet been combat tested. Nor had they been designed for the runways of an aircraft carrier and to add greater difficulty, they would have to take off in enemy waters, hoping not to be discovered until arriving at the right place for the launch.

James Doolittle, a month before the attack. (AP)

The last stage of Low’s proposal pointed out that, after the attack, the bombers headed for safe airfields in China, although the autonomy that the planes would have to get there was not clear. It all depended on what the pilots could do and the weather and wind conditions.

However the need for a triumph outweighed the inconsistencies of the plan and work began immediately. Many defined it as a “suicide mission” because of the very high risk and that is why experienced aviator James Doolittle was selected to take charge of the complex task.

In five bombs the medals of “friendship” were hung (AP)

On January 2, 1942, Doolittle had been promoted to the rank of Lieutenant Colonel and shortly after, he volunteered to develop and execute the plan.

With the strategy outlined and the pilots who would lead the attack selected, work was done on the planes. The thing is they practically had to be reassembled so they could refuel and the weight of explosives.

During the entire month of March, the trainings were carried out, until on April 1, 1942, the Operation Doolittle was launched.

The 16 modified bombers, their five-man crews and Army maintenance personnel (a total of 71 officers and 130 soldiers), boarded the aircraft carrier Hornet at Naval Air Station Alameda.

Each B-25 carried four specially built 225 kg bombs. Three of them were high explosive ammunition and one was an incendiary pack. In five of those projectiles “Friendship” medals were hung on them, which had been awarded by the Japanese government to the US military before the war.

A fishing boat burned the plans

It was 7.38 a.m. on April 18 when a Japanese armed fishing boat, Nittō maru discovered the aircraft carrier and gave notice of the attack. Although the Japanese ship was sunk, the captain Marc Mitscher decided to launch the planes before it was too late. They were not yet in the planned position for launch so the B-25s they would have to travel 300 kilometers on their own to reach Japan and they would have practically no fuel to get to China.

Veteran Richard Cole, co-pilot that morning, recounted in an interview what happened when plans had to change: “Doolittle gave us all the opportunity to retire before taking off, but no one did.”

20 minutes after 8 o’clock, the first plane, piloted by Doolittle himself, took off from the Hornet. (AP)

20 minutes after 8 o’clock, the first plane, piloted by Doolittle himself, took off from the Hornet. “When the bomber took off from the carrier there was a moment when it dived under the bow. It looked like it was about to sink into the ocean, because it was carrying too much weight from the bombs. Then it quickly took off and slowly soared over the horizon, “described Timothy Orr, a history professor at Old Dominion University.

It was three hours of flight in the middle of turbulence and a hazy sky, until finally at 12, the 16 B-25 bombers reached the mainland. 30 seconds in the sky over Tokyo and the rest of the cities chosen to bomb demanded the attack. They all managed to unload their cargo causing shock in a society that did not imagine that it could come to suffer an attack.

The most forceful blow was delivered by the bombs that landed on the grounds of the emperor’s palace. “This was incredible. All Japan was shocked. The emperors are divine figures, it is not like a president, who is elected to another and voila. For the Japanese culture they are something superior and if due to a military carelessness, the emperor is assassinated, the mass suicide of the entire Japanese high command would have followed instantly “said historian Andrew Labert.

“It was a shock to the Japanese population, because it was at that time, in the first stage of the war, that Japan was said to be winning. The attack on the imperial palace caused much outrage “, described Sayuri Guthrie Shimizu, Rice University history professor in the documentary “Events of World War II.”

How many pilots survived the Doolittle Raid

With the attack over, now was the time to escape. The weather conditions had completely changed and 15 of the 16 B-25s headed to China in search of those dreamed airfields. None got there.

The power of the weather, the accumulated flight hours, the exhaustion of the pilots and the little fuel remaining, made that the crew had to jump out of the planes and find a way to get to safety in the middle of a territory in full dispute between China and Japan. It was already night and the objective was simply to avoid the sea, where it would be almost impossible to survive.

The escape after the attacks.

By not reaching the airfields, most of the crews they parachuted over various Chinese cities. The sixth plane fell into the sea; two of its crew drowned and three managed to save themselves; upon landing they were captured by the Japanese.

The third plane ran out of gas mid-flight and the crew parachuted over the Chuchow Range. Pilot Leland Faktor died of injuries, before the rest of his companions were rescued by Chinese troops.

The story was even more complex for him. Major Edward J. York who did not even have the fuel to try to reach China. So he decided to head towards Russian territory. He landed near Vladivostok and was arrested by the Soviets, who had a non-aggression pact with Japan. Almost a year later York and his crew were handed over to the English authorities at a British consulate close to the border with Iran.

He parachuted and fell in the middle of a heap of manure, in a paddy field in Quzhou. There, he received assistance from the American missionary John Birch, who took him out of the Japanese lines.

Doolittle was received with honors.

Before arriving again in the United States, he believed that his work was going to be questioned, since all B-25 aircraft that were part of the mission were lost. However, the success of the attack brought a strong emotional impact and was greeted as a national hero. The United States Air Force promoted him to Brigadier General and was awarded the Congressional Medal of Honor.

Roosevelt was finally celebrating his first World War II triumph, even though this was barely the beginning of a conflict that would be sealed with two nuclear bombs.

Albert Einstein: 7 curious and unknown facts about his personal life, 66 years after his death