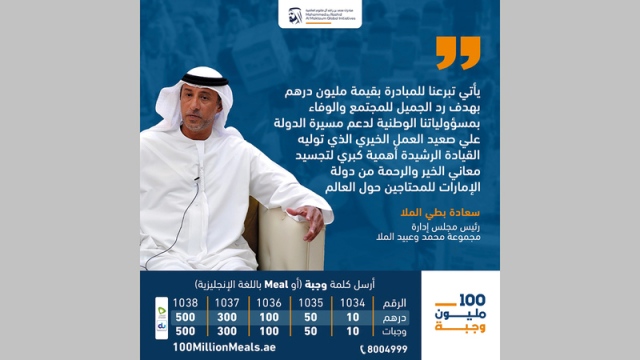 The “Mohamed and Obaid Al Mulla Group” made a cash donation of one million dirhams in support of the 100 million meals campaign, which aims to provide a network of food support to the needy and target groups in 30 Arab, African and Asian countries throughout the holy month of Ramadan.

The cash contribution from the group comes in favor of the largest campaign in the region to feed food throughout the month of fasting, as part of the response of institutions, companies, businessmen and community members in the UAE and abroad to the campaign of 100 million meals, which was His Highness Sheikh Mohammed bin Rashid Al Maktoum, Vice President and Prime Minister The Ruler of Dubai announced its launch two days before the start of the holy month, noting that the campaign, thanks to the influx of cash donations to it from philanthropists, philanthropists and white-handsome individuals and institutions, succeeded in achieving 78% of its goal by providing 78 million meals at a value of 78 million dirhams. In its first week.

The Chairman of the Board of Directors of the Mohammed and Obaid Al-Mulla Group, Butti Al-Mulla, said: “The 100 million meals initiative is an extension of the good and giving initiatives of His Highness Sheikh Mohammed bin Rashid Al Maktoum, Vice President and Prime Minister of the UAE and Ruler of Dubai, in order to provide food support to the needy and needy families in the region. Arab countries, the continents of Africa and Asia, and contributing to overcoming the challenge of hunger in the world, confirming the firm approach of our country in dealing with humanitarian issues, and the constant keenness to be a global oasis of good and giving.

He added: “Our donation to the initiative, in the amount of one million dirhams, aims to return the favor to society and fulfill our national responsibilities to support the state’s march in terms of charitable work, which the leadership attaches great importance to embodying the meanings of goodness and mercy from the UAE to the needy around the world, in support of the process of giving that has laid its foundations since the union’s inception. The late Sheikh Zayed bin Sultan Al Nahyan, may God rest his soul. ”

The 100 million meals campaign falls under the umbrella of Mohammed bin Rashid Al Maktoum Global Initiatives, and aims to enable philanthropic individuals, institutions and companies inside and outside the UAE to donate to provide food support to the needy and lower-income groups in 30 Arab, African and Asian countries, and to achieve its goal, the campaign concluded a partnership with all From the United Nations World Food Program and the regional network of food banks, in addition to a number of charitable and relief organizations and societies in the countries covered by the campaign, allowing the delivery of storable food parcels to individual and family beneficiaries directly to their places of residence, through campaign partners from food banks and associations Charitable and relief and local civil society organizations.