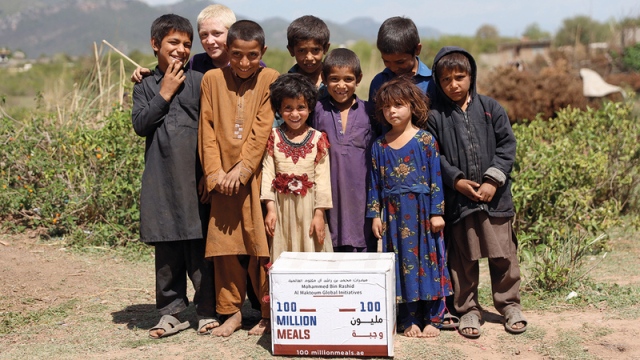 Abu Dhabi Islamic Bank announced its donation of one million dirhams, equivalent to the value of basic foodstuffs, to prepare one million meals to be distributed during the holy month of Ramadan, as part of the “100 million meals” campaign, the largest in the region to feed food during Ramadan in 30 countries.

Mohammed bin Rashid Al Maktoum Global Initiatives is organizing the “100 Million Meals” campaign this year to reach millions of beneficiaries of individuals, needy families, hungry and needy people in 30 countries in the Arab world and the continents of Africa and Asia, and to provide them with meals that embody the values ​​of giving and giving in the month of charity, in cooperation With the Mohammed bin Rashid Al Maktoum Humanitarian and Charity Establishment that implements the campaign, the World Food Program, the regional network of food banks and a number of charitable and humanitarian organizations, to ensure a direct and fast distribution process for all beneficiaries.

The “100 million meals” campaign, the largest and first of its kind in the region, continues throughout the month of fasting, and receives contributions from companies and institutions from the public and private sectors, economic actors and businessmen inside and outside the country, in addition to individual donations from the UAE community.

The Regional Director of Abu Dhabi Region, Member of the Sustainability Council at Abu Dhabi Islamic Bank, Hassan Abdullah Al Shamsi, said: “We are pleased at Abu Dhabi Islamic Bank to be part of the (100 Million Meals) campaign, and to contribute to extending a helping hand to the needy and needy families in the Arab region, the continents of Africa and Asia, and to contribute. In overcoming the challenge of hunger in the world, we are also proud to unite our efforts with the Mohammed bin Rashid Al Maktoum Charitable and Humanitarian Foundation and the concerned authorities to support global efforts to reduce hunger problems in more than 30 countries around the world, and we look forward to providing all the necessary support to achieve our leadership’s vision of spreading good, Especially since the initiative coincides with the blessed month of Ramadan, and based on the bank’s keenness to establish the highest standards of social responsibility ».

The government approved a “roadmap” for increasing gasification in regions

Hillman: The UAE is the ideal place to live in “the time of Corona”