On Education Day, the UAE spreads the light of knowledge 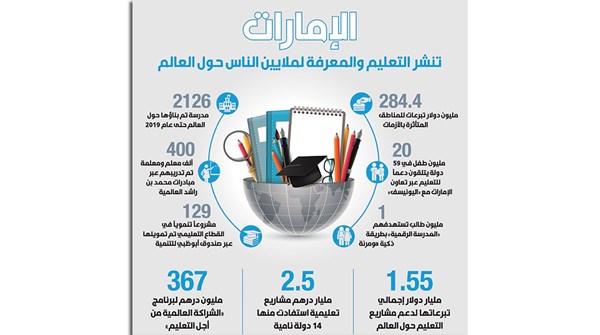 The UAE stands at the forefront of countries supporting the spread of education and knowledge at the international level through many initiatives and programs aimed at improving the educational process in brotherly and friendly countries, based on its civilizational and humanitarian mission that believes that education is the basis for the renaissance and development of peoples.
In its foreign aid, the UAE is keen to give priority to the protection of education, as it confirmed during the open debate of the Security Council on “Children and Armed Conflict” held last September that its total donations to support education projects around the world amounted to $ 1.55 billion, including a donation of $ 284.4 million. For crisis-affected areas, where the UAE has cooperated with UNICEF and other partners since 2017 to support the education of 20 million children in 59 countries.
The “International Day of Education”, which the world celebrates today, under the slogan “Restoring and revitalizing the educational process for the generation who lived through the Covid-19 pandemic”, is an occasion to highlight the efforts made by the UAE in order to spread education and knowledge at the Arab and international level, targeting primarily groups. Whose living conditions prevented her from obtaining adequate education.
The UAE is one of the first countries that sought to harness the technology of modern means of communication in order to overcome all emergency conditions that hinder the process of spreading education and knowledge at the Arab and international level, and in this context His Highness Sheikh Mohammed bin Rashid Al Maktoum, Vice President and Prime Minister of the UAE and Ruler of Dubai launched “May God protect him”, last November, “The Digital School”, one of the projects of the Mohammed bin Rashid Al Maktoum Global Initiatives Foundation, and the first integrated and accredited Arab digital school that provides remote education in a smart and flexible way for students from any country in the world.
The digital school, which targets more than one million students in the first five years, will provide a modern educational curriculum, based on the latest technologies of innovation and artificial intelligence, in order to enhance students’ abilities to self-learn and acquire knowledge and skills in various fields.
His Highness also inaugurated the “Alliance for the Future of Digital Learning” to mobilize all specialized expertise in the education and technology sector to support and develop digital learning and supervise the establishment and development of the digital school.
The UAE contributes to spreading education at the international level through the establishment of schools and universities, or by providing grants and funds that help provide education for all different groups. Perhaps one of the most prominent evidence of this is the contribution of Sheikh Mohammed bin Rashid Al Maktoum’s initiatives in building more than 2,126 schools around By 2019, the world has trained 400,000 teachers.

129 development projects
In the same context, the statistics and data included in the report issued by the Abu Dhabi Fund for Development in early 2019 revealed that the fund has funded 129 developmental projects in the educational sector, with a total value of 2.5 billion dirhams, from which 14 developing countries have benefited.
In February 2018, the UAE announced its commitment to provide a financial contribution of 367 million dirhams ($ 100 million) to the “Global Partnership for Education” program. With the aim of improving learning outcomes for about 870 million children and youth in 89 developing countries, making it the first country at the Arab and regional levels to provide support to the Global Partnership for Education.
Refugees in the world are considered the most suffering group in terms of deprivation of educational opportunities, as there are more than 7.1 million refugee children in the world who are of school age, of whom about 3.7 million children (or more than half) do not go to school, according to UNHCR data. To the United Nations for Refugees in 2020.
Faced with this bitter reality, the UAE is making unremitting efforts, in cooperation with its regional and international partners, to provide appropriate education to refugees around the world and contribute to developing the skills they need to ensure their long-term future.
The initiatives and material and in-kind assistance provided by the UAE to the concerned international organizations and the governments of the countries receiving refugees contribute to alleviating the severity of the refugee deprivation crisis of educational opportunities, for example the value of the aid it provided in the education sector in response to the Syrian crisis and those affected by it during the period from 2012 to January 2019, about 190.1 million dirhams ($ 51.8 million).

Refugees
The UAE’s response to ensuring that Syrian refugees in the Hashemite Kingdom of Jordan and Lebanon, and in other countries, have access to appropriate educational opportunities, is a unique experience that deserves to be paused at length to draw lessons and lessons on how to manage humanitarian crises and mitigate their negative effects.
The UAE is one of the most important countries that support the efforts made by the United Nations Relief and Works Agency for Palestine Refugees in the Near East (UNRWA) to help it implement its educational programs for male and female students and ensure that they obtain their rights to education .. According to “UNRWA”, education has acquired more than 80 Percent of the value of the UAE support to the agency during the period from 2014 to 2019, which amounted to more than $ 164 million.
In implementation of the pledge announced by the UAE during the “Conference of Solidarity with Uganda on Refugees” held in 2017, the UAE provided funding of about $ 5 million to implement development projects in Uganda that include establishing schools, building teachers’ capacities, and other professional skills, which will be beneficial. About 600,000 people are refugees from southern Sudan, in addition to the host community in the north of the country.

Nadal: “I’m worried about my back, but I’m not giving up anything”

Russian film set another box office record in a pandemic