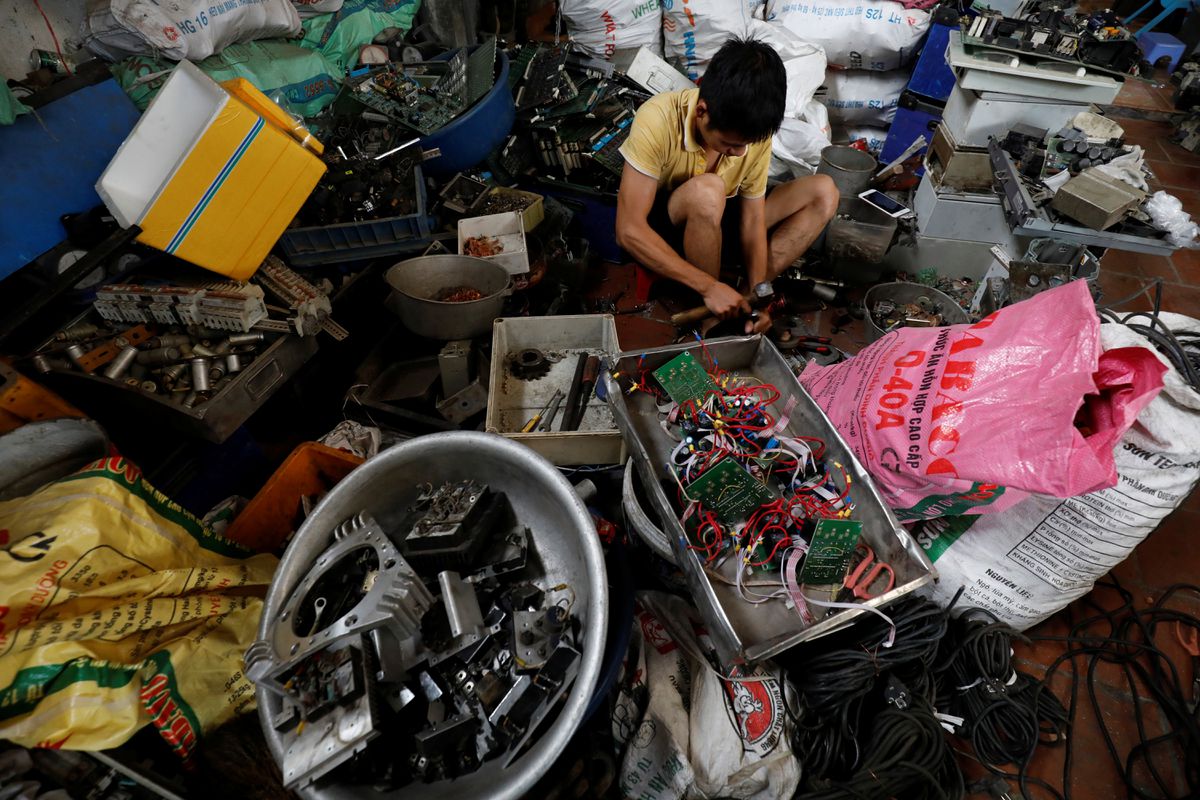 Mobile phones, computers, printers, screens, small appliances, toys and all kinds of devices. As if they were the corridors of a large commercial area, in the digital dumps of African, Asian and Latin American countries you can find remains of all these products, many of them coming from the hands of Western consumers. Many children and adolescents participate in its dismantling and burning to extract other materials, highly valued for their small and skillful hands. Many other minors live, go to school and play near these dumps, with the threat to their health that this poses from being exposed to more than a thousand toxic substances.

In 2019 alone, 53.6 million tons of electronic waste were generated in the world, an average of 7.3 kilos per individual, according to data from the report The Global E-Waste Monitor 2020. The current consumption model, an increasingly accessible use of mobile phones and smart devices and that household appliances are designed to be renewed every few years instead of being repaired are the main causes that these materials are increasing: forecasts indicate that by 2030 it will reach 74.7 million tons.

The management of this type of waste must be carried out following very specific security measures and control systems that guarantee environmental and social standards. However, more than 82% of those generated in 2019 had an uncertain destination, that is, it was not recycled correctly. Most of them ended up in one of the illegal dumps in developing countries. Unmanaged garbage dumps such as Agbogbloshie, a neighborhood in Accra, the capital of Ghana, and which are the way of life for thousands of people who work extracting artisanally and without protective measures the materials that can be used from the processing of these materials.

Being aware of the health risks of this reality, the World Health Organization (WHO) has recently presented Children and digital garbage cans: exposure to e-waste and children’s health, a pioneering report that highlights the negative impacts and dangers posed by these landfills on the health of children, adolescents and pregnant women. According to this same report, 18 million minors – some even five years old – work in the industrial sector, which includes waste processing. These activities, being carried out many times in an irregular way, give rise to no control over them or the people who carry them out.

This problem has a very important impact on the health and growth of children and adolescents, since their organs and immune system are still developing and they are much more vulnerable. In the case of pregnant women, they can also be transmitted to the fetus. The most important health risks have been related to exposure to heavy metals or persistent organic pollutants such as dioxins and particulates emitted by the combustion of waste, one of the main forms of clandestine processing of digital waste.

Electronic waste pollutes the earth, water, dust, and air. And in addition to inhaling or ingesting their remains, workers carry them back to their communities attached to their skin or clothing. One of the demands of the WHO in this report is the investigation of the possible health effects of the continuous and prolonged exposure of minors, their families and communities to these substances, associated with cases of cancer, endocrine system alterations, problems neonatal, neurological and cognitive development problems, metabolic diseases, lung damage or liver damage, among other effects.

By 2030, it is expected to reach 74.7 million tons of electronic waste

Blanca Carazo, Head of Programs at Unicef ​​Spain, stresses that children have the right to grow and develop in a clean and safe environment that also guarantees their right to health, and that being exposed to certain pollutants can have irreversible consequences for their physical, cognitive and neurological development. “Lead,” he explains, “which often comes from cell phone batteries and other devices, is a neurotoxin that causes serious brain damage, especially in children under five, and has even been linked to behavioral and mental health problems , and a greater tendency to violent attitudes, in addition to producing cardiovascular or kidney diseases “.

Carazo emphasizes the importance of keeping minors away from this type of activity: “For this, it is necessary to address the generation and treatment of this type of waste at a global level, as well as to strengthen health systems to detect and treat exposure to these substances. It is also essential to disseminate information about these dangers, as well as to provide income-generating and social protection alternatives to avoid that extracting valuable metals from this type of waste is, for many families, the only alternative ”.

Tedros Adhanom Ghebreyesus, Director General of the WHO referred to this situation as “a tsunami of electronic waste that puts life and health at risk”. Reality shows that this threat affects not only that of landfill workers, but also the capabilities of future generations.

Europe recorded the highest amount of production per person and also the highest rate of waste collection and recycling through official channels during 2019, according to The Global E-Waste Monitor. However, most of it was generated in Asia. At the international level, there are conventions such as Basel, Rotterdam and Stockholm that prohibit the commercial use and transboundary movement of certain wastes and substances considered dangerous, and that pose a challenge for the signatory States.

Although the number of countries that have adopted laws on this matter has increased, their number is still very small, since it does not even reach half of the states recognized by the UN. This, together with the lack of economic investment and political interests in some regions, does not encourage the proper collection and management of electronic waste at the international level. In other cases, as he already denounced Greenpeace in previous reports, with the argument of “reducing the digital divide”, second-hand computer equipment with a very short useful life or directly useless is sent to less developed countries, which means that it will probably end up in one of these illegal dumps in a short time.

In the report, the WHO proposes measures and actions in the matter of waste management and health research that raise awareness about the health impacts of this reality in children and adolescents, bearing in mind that, for many families, this irregular work is their way of working. lifetime. Therefore, it presents recycling and the correct management of electronic waste as an income opportunity. Better recycling means less production and emission of carbon dioxide into the atmosphere, in addition to a decrease in the demand for valuable materials for the industry such as gold, platinum, palladium, cobalt or copper that can be recovered from these products.

In Spain, approximately every three years, a person changes their mobile phone. Many times, the old phone ends up forgotten in a drawer. Then time passes, the software becomes outdated, the model obsolete and an electronic waste accumulates at home that is not going to be given any further use. However, many of its components are recyclable and represent an economic and resource saving if they are managed properly.

In 2019 alone, 17.4% of electronic waste in the world was properly documented and recycled. This percentage, although small, represented a potential value of 10 million dollars and four million tons of raw materials available for recycling, and avoided the emission of 15 million tons of carbon dioxide into the atmosphere.

The 2030 Agenda and the SDGs also benefit from this waste management by betting on greater environmental and health awareness, reducing adverse environmental impacts in cities, promoting a rights-based approach to children’s health, promote the creation of decent jobs, the prohibition of child labor and to guarantee a model of sustainable consumption and production.

Marie-Noël Bruné Drisse, from the Children’s Environmental Health, Chemical Safety and Health unit, from the WHO Department of Environment, Climate Change and Health and author of the report, insists on the idea that inappropriate waste management is a growing health problem that will have a devastating effect for years to come. Although the study was completed shortly before the start of the COVID-19 pandemic, the experience can serve to raise awareness about the risks of infectious diseases in community settings.

Improper waste management is a growing health problem that will have a devastating effect for years to come.

The report underlines the importance of posing this situation as an environmental and public health problem that involves all countries. To do this, it is committed to effective policies that curb the export and import of electronic waste and measures aimed at guaranteeing health and safety at work. It also proposes proposing contextualized solutions that make the workers of these clandestine landfills visible and take into account and raise awareness from a health perspective of the health risks that this type of garbage entails for the entire community. More research, more resources and a commitment to the circular economy while consuming less.

Bruné Drisse also highlights the importance of incorporating communities and workers as part of the solutions, of promoting access to direct care health systems and of being aware of the health problems they pose. “We understand, and I think this is fundamental, that commitment with young people is essential, because they are the present and future consumers of electronic products, and they are unique agents of change and support, as we saw in the March for Climate, when they demanded Actions. They can be aware of the impact that electronics can have on future health and the environment and will undoubtedly be one of the most important allies to act ”. That is, reduce, repair, recycle, reuse and raise awareness. Because the health and protection of children and adolescents is a global issue.